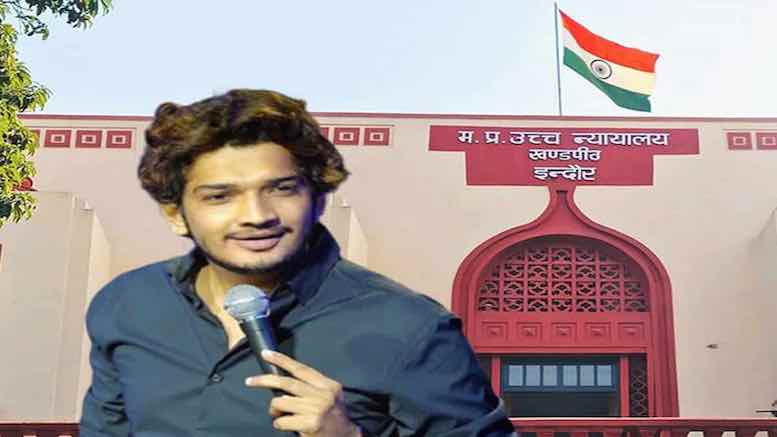 The Madhya Pradesh High Court (Indore Bench) today denied bail application of ‘stand-up comedian’ Munawar Faruqui and co-accused Nalin Yadav. The 2 men were arrested along with 3 others – Edwin Anthony, Prakhar Vyas and Priyam Vyas – on 1 January from Indore for denigrating Hindu deities and other offensive content during their stand-up act.

The single bench of Justice Rohit Arya noted in his order:

It is not a case of no evidence. Moreso, the investigation is in progress. The possibility of collection of more incriminating material and complicity of other persons cannot also be ruled out. Further, it has come on record that similar nature of offence has been registered against the applicant at Police Station Georgetown, Prayagraj, State of Uttar Pradesh….

There is also a specific assertion by the learned counsel for the complainant that the applicant alongwith other co-accused persons allegedly making outraging filthy jokes in social media deliberately against Hindu Gods, Lord Shriram and Goddess Seeta hurting religious sentiments of Hindus for the last 18 months despite, protest on various social media platforms. There is nothing on record to the contrary.”

Testimony of those who witnessed the show (where it is said Faruqui asked the audience not to record and surrender their mobile phones before he started his act) which was included in the judge’s order, indicate that this time Faruqui surpassed the anti-Hindu bigotry he has displayed in past :

Translation of the Hindi extract above:

“Munawar Faruqui came for his act and he asked the audience to stop recording and surrender their mobiles. In the beginning itself, he used very objectionable language while talking about Bhagwan Ram and Sita..(Madhuri sings) the song ‘mera piya ghar aay, o Ram ji’ to which Ram says “I don’t give a f**k”, and then Sita abuses Madhuri calling her a b***h. Faruqui further went on to say that all Hindu devi-devatas are born of illegitimate relationships as can be seen in Mahabharat and Ramayana. In Mahabharat many people use one woman to produce children, the woman is a child-producing machine. And he didn’t stop there..he cracked a joke saying once Yamraj took a dead body to Bhagwan and Bhagwan abused him saying, ‘M*** ***d, I asked you to get someone else’. After this he made fun of the kar sevaks who were murdered and burnt alive at Godhra.”

On Monday, while reserving the order that he passed today, Judge Arya had said, “But why you take undue advantage of other’s religious sentiments and emotions. What is wrong with your mindset? How can you do this for the purpose of your business?…Such people must not be spared.”

Faruqui was represented in court by Congress Rajya Sabha MP and senior advocate Vivek Tankha, who had also appeared in SC recently on behalf of protesting farmer unions.

“He has committed no offence in the matter your lordships. Bail should be granted”, Tankha had submitted.

On January 5, a Sessions Court in Indore had dismissed the bail applications of the accused. The five accused have been booked under sections 295-A (deliberate and malicious acts, intended to outrage religious feelings of any class by insulting its religion or religious beliefs), section 269 (unlawful or negligent act likely to spread the infection of any disease dangerous to life) and other provisions of the Indian Penal Code (IPC).

Ever since Faruqui was arrested, left-liberal media, which is basically the entire spectrum of Indian English-language media, has been lobbying for his release and creating a narrative that he was arrested ‘without any evidence’. That 4 other men were arrested along with Faruqui was ignored by Islamic propagandists like The Print‘s Zainab Sikander who claimed in a piece on Monday that ‘Munawar Faruqui is no hardened criminal, and denying him bail is to keep Muslims in line.’

Incidentally, the same Sikander had lashed out at Charlie Hebdo cartoonists (murdered by IS jihadis) for ‘bullying’ Muslims and made a bizarre comparison with the Bhagavad Gita while justifying a Quranic verse which talks about killing the unbelievers.

One would hope that the testimony attached in the MP High Court order today shows that there is more than enough evidence to proceed against Faruqui and others. But then again, facts hardly matter for professional Hindu baiters.

The testimony and past videos of similar comics also provide a window into just what kind of crude bigotry passes as comedy for deracinated Hindus today. With the Supreme Court also recently rejecting pleas for protection from arrest filed by makers of the anti-Hindu propaganda Amazon Prime web series ‘Tandav’, the heat is surely turning up on anti-Hindu bigots who have taken liberties all this while under cloak of freedom of expression.

Now, it is up to Hindu society at all levels to keep up the pressure on our legal system and ensure that these cases reach their natural conclusion to set an example and create a strong deterrent against future abuse and denigration of Dharma and Hindus.