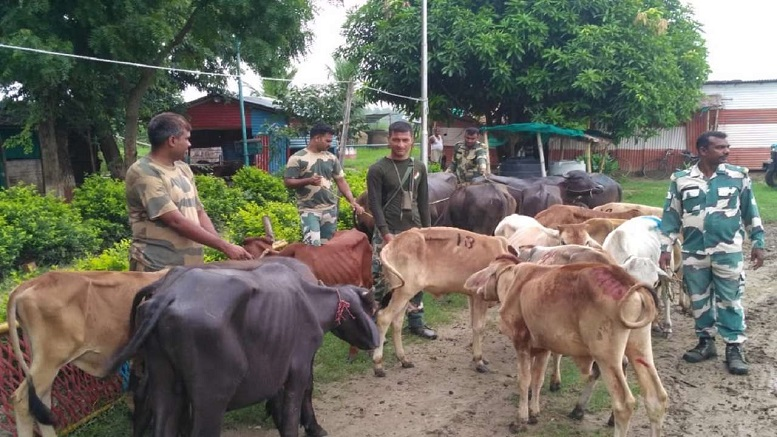 The issue of smuggling across Bharat-Bangladesh border is widely known, but the extent of such smuggling is not understood by most. Just day before yesterday, there were three incidents in which BSF caught and foiled smuggling operations. One was in Meghalaya, where smugglers were trying to smuggle 118 cattle, cows and oxen, to Bangladesh. Second one in Assam, where drugs were being smuggled across the border and the third one in Mizoram, where “28 AK series rifles, one Insas rifle and one 0.3 inch carbine” along with a large amount of ammunition were being brought to Bharat from Bangladesh.

The incidents of yesterday tell us three things. One, it is not only at the West Bengal and Assam border, where smuggling happens. It happens all along the border from other states i.e Megalaya, Mizoram and Tripura. It must be remembered that the border is 4,096-kilometre-long, Bharat’s longest with any country. It is mostly in hilly terrain or defined by large rivers and thus is quite porous. The security forces, mostly BSF, can not effectively block all movement across the border.

Two, the volume of such unauthorized commerce and crossings is very large. Take the case of cows and oxen. 118 such animals were caught in one day. Of course, to be profitable, this trade must have many more undetected transactions. Hundreds and possibly thousands of cattle are herded every day into Bangladesh from Bharat. Some of these are bought from their owners but a large number are actually stolen by cattle smugglers. This is an organised crime and smugglers often engage villagers and police in violent conflicts. Some of them die trying to steal and liberals call this as “lynching”.

Three, there is diversity in the articles of commerce. It includes cows, as well as drugs and ammunition. Human trafficking is another major concern. According to govt documents, there are more than 2 crore Bangladeshis living illegally in Bharat. Many of these are engaged in anti-Bharat activities. All this smuggling complements each other and the same persons are involved in these. All of these hurt Bharat economically, socially and also in the matter of national security

The scale of such smuggling can be gauged from the fortunes of one Muhammad Inmul Haque. He is the super rich you have never heard about. He is one of the around 1000 people in Bharat who have a net worth more than Rs. 1000 crores!

The annual turnover from such smuggling across Bangladesh border was estimated to be Rs. 20000 crore in 2018! The modus operandi of smugglers such as Inamul Haque is to steal and buy cows from all over north Bharat. They have operations as far west as Rajasthan. Once at border, these cows are used as carriers for contraband items including drugs and weapons. They are smuggled over land and also through rivers.

But that is not their only utility. As the input cost is close to zero, due to stealing, the cows themselves are sold for a large amount in Bagladesh. According to reports, the cost of a cow in Bangladesh is about Rs. 30000, while the whole cost from buying/stealing from Bharat and smuggling across the border is not more than Rs. 6000-7000. So there is a huge margin in cattle smuggling itself.

Many Bangladeshi Muslims consider it their sacred duty to kill cows and eat beef. This mentality is rooted in hatred for Hindus and can be seen in the gruesome way cows are killed in Pakistan and Bangladesh. As Hindus consider cows sacred, the same must be slaughtered to taunt them! This trade increases multiple fold around Islamic festivals, specially Bakrid.

Inamul Haque was at the center of one such network and made crores over the years. His smuggling activities made him one of the richest men in Bharat and he owns huge properties in West Bengal. No doubt, he has powerful connections in the government and ruling party too. Without the complicity of elements within the ruling party and government, it would be very difficult to run a smuggling operation of such a big scale. Of course, some corrupt Border Security Force (BSF) and Customs officials are also involved in this.

Recently, the 2018 case registered by the CBI on one Satish Kumar, a former Commandant of BSF was in news again. Last week, CBI conducted raids in 15 places in West Bengal and Uttar Pradesh and a BSF officer’s residence at Salt Lake in Kolkata was also sealed.

According to the agency’s FIR more than 20,000 cows were seized by the BSF when Kumar was posted as commandant of the 36th Battalion from May 2016 to May 2017. However, neither was any smuggler arrested nor the vehicles used for ferrying the cattle seized! So how did this work?

Most of the smuggling went on without involvement of BSF. However, when BSF did manage to capture smugglers, another game started. It is alleged that cows and other cattle, seized by the force while being smuggled, were auctioned within 24 hours.  In this some Customs officers also helped them.  The smugglers would now come as cattle traders and bought these at throwaway prices.

This would be done by showing all cows as having small size or inferior quality. The allegation is that for every cow sold through this method, BSF officials and Customs officials collected some fixed amount. Of course, the ordinary jawan was not involved. It was all between the higher ups in BSF. The cows would again be smuggled across the border, this time with blessings corrupt elements in BSF.

The Bangladesh border is porous and not much can be done at the border to thwart smuggling. BSF tries and does capture tens of thousands of cattle, huge amount of drugs and ammunition each year. However, unless the approach roads to border are checked vigilantly by state police, thousands of crores of Bharatiya wealth would be smuggled across the border. Many such smuggler barons like Inamul Haque will continue to thrive with support from corrupt elements of BSF.

The NRC is urgently needed in this regard, as many of the traders and their supporters are Bangladeshis illegally living in Bharat. They are also suspected to have links with Islamist terror organisations. The coordinated efforts of state and central government is the only way this menace can be tackled.