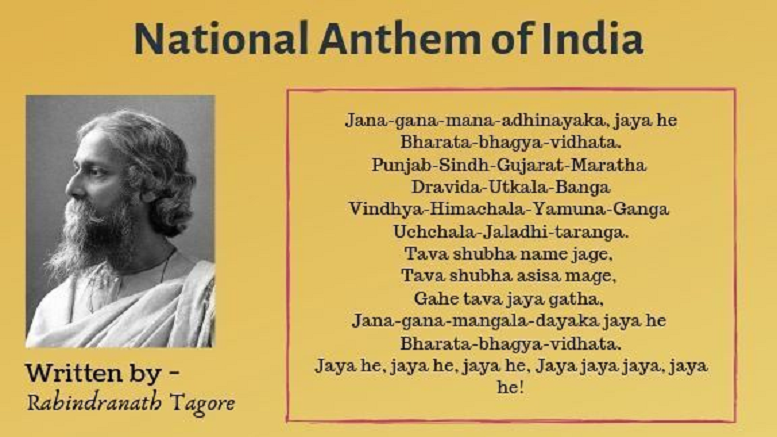 The national anthem of any country inspires nationalistic fervor and unity. It encapsulates and appeals to the country’s national consciousness.

Rabindranath Tagore was an accomplished Bengali poet, music composer, writer, painter. He introduced the use of colloquial language into Bengali literature, and new forms of prose and verse. He was the youngest son of the religious reformer, Debendranath Tagore, born on 7 May 1861.

He was home-educated and sent to England for formal schooling at the age of 17. Partially completing his studies, he returned home and pursued his passion for literary work. In 1880s, Tagore published several books of poetry and in 1890, Manasi (The Ideal One) with some of his best poetries.

In 1891, Tagore went to East Bengal (now in Bangladesh) for 10 years to manage his family’s estates at Shilaidah and Shazadpur. Tagore loved the Bengal countryside, most of all staying in a houseboat on the River Padma (the main channel of the Ganga) – an oft-repeated scene in his verses.

Among several poems that Tagore wrote during this time, notable ones are: Sonar Tari (The Golden Boat; 1894), and the play, Chitrangada (Chitra; 1892). The ‘humble lives and miseries’ of the village folk deeply influenced him and became the highlight of his finest short stories. Director, Satyajit Ray, admirably adapted these in his films.

In 1901, he started an experimental school in rural West Bengal at Shantiniketan (Abode of Peace) blending the Upanishadic ideals of education with the best of Eastern and Western traditions.

Tagore wrote over 2,000 songs and composed the music himself. Many of these are popular among the Bengalis to this day. Gitanjali (Song Offerings; 1910) reflects the sadness arising from four deaths in his family between 1902 and 1907. He lost his wife, Mrinalini Devi due to an undiagnosed disease, and his daughter, Renuka in the same year, 1902.  His father passed away in January 1905.  And on the fifth death anniversary of his wife in 1907, his son Shamindranath died of cholera at the age of 11.

As a patriot who wrote songs lionizing the Bharatiya independence movement, Tagore became close to Gandhiji. They became devoted friends.  Two of Tagore’s compositions, Chio Jetha Bhayshunyo (Where the Mind is Without Fear, Gitanjali Poem #35), and Ekla Chalo Re (If They Answer Not to Thy Call, Walk Alone), gained mass appeal, with the latter favored by Gandhiji and Netaji.

27 Dec 1911:  Jana Gana Mana was first sung  at the Kolkata session of the Indian National Congress.

There is a controversy that the poem is in honor of King George V – may be owing to two reasons: one, the poem was written in December 1911, precisely coinciding with the coronation of King George V and; two, the occasion when it was sung and how it was reported in some newspapers as a paean in praise of ‘the overlord of India’s destiny’.

The confusion clearly arose in the British Indian press:

Englishman, 28 Dec 1911: ‘The proceedings began with the singing by Rabindranath Tagore of a song specially composed by him in honor of the Emperor.’

A different song, Badshah Humara, written in Hindi by Rambhuj Chaudhary, was sung on the same occasion in praise of the monarch. The nationalist Bharat’s press stated this difference clearly:

Amrita Bazar Patrika, 28 Dec 1911: ‘The proceedings of the Congress party session started with a prayer in Bengali to praise God (song of benediction). This was followed by a resolution expressing loyalty to King George V. Then another song was sung welcoming King George V.’

The Bengalee, 28 Dec 1911: ‘The annual session of Congress began by singing a song composed by the great Bengali poet Ravindranath Tagore. Then a resolution expressing loyalty to King George V was passed. A song paying a heartfelt homage to King George V was then sung by a group of boys and girls.’

Indian, 29 Dec 1911: ‘When the proceedings of the Indian National Congress began on Wednesday, 27th December 1911, a Bengali song in welcome of the Emperor was sung. A resolution welcoming the Emperor and Empress was also adopted unanimously.’

The annual INC report of Dec 1911 also stated this difference: ‘On the first day of 28th annual session of the Congress, proceedings started after singing Vande Mataram. On the second day, the work began after singing a patriotic song by Babu Rabindranath Tagore. Messages from well-wishers were then read and a resolution was passed expressing loyalty to King George V. Afterwards the song composed for welcoming King George V and Queen Mary was sung.’

‘A certain high official in His Majesty’s service, who was also my friend, had requested that I write a song of felicitation towards the Emperor. The request simply amazed me. It caused a great stir in my heart.

In response to that great mental turmoil, I pronounced the victory in Jana Gana Mana of that Bhagyo Bidhata [ed. God of Destiny] of India who has from age after age held steadfast the reins of India’s chariot through rise and fall, through the straight path and the curved. That Lord of Destiny, that Reader of the Collective Mind of India, that Perennial Guide, could never be George V, George VI, or any other George.

Even my official friend understood this about the song.  After all, even if his admiration for the crown was excessive, he was not lacking in simple common sense.’

Again on 19 March, 1939, Tagore wrote: ‘I should only insult myself if I cared to answer those who consider me capable of such unbounded stupidity as to sing in praise of George the Fourth or George the Fifth as the Eternal Charioteer leading the pilgrims on their journey through countless ages of the timeless history of mankind.’

Jan 1912: Jana Gana Mana was first published in the Tattwa  Bodhini  Patrika magazine under the title, Bharat Vidhata.  It was also sung in the presence of prominent leaders at the annual event of Adi Brahmo Samaj by Sarala Devi Chowdhurani, Tagore’s niece, along with a group of school students.

During this time, Tagore toured Europe, the Americas, East Asia reading and lecturing from his works. Thus, he became an eloquent voice of Bharat’s spiritual heritage and independence. In the same year, Tagore introduced Gitanjali to the West containing English prose translations of religious poems from several of his Bengali verse collections. W.B. Yeats and André Gide greatly admired his literary acumen and won him the Nobel Prize in Literature in 1913 from the Government of Sweden – becoming the first non-European to receive the award.

Following this, King George V conferred the knighthood of ‘Sir’ in 1915. However, Tagore repudiated the knighthood in protest against the 1919 Amritsar Jallianwala Bagh Massacre. Tagore translated his Bengali novels Gora (1910) and Ghare-Baire (1916), respectively into English as Gora and The Home and the World, respectively.

28 Feb 1919: For the first time, Rabindranath Tagore himself sung it at Besant Theosophical College, in Madanapalle, Andhra Pradesh. Enthralled, the college vice-principal, Margaret Cousins, requested for an English translation.  On the same day while at the college, Gurudev wrote the English translation, The Morning Song of India, and set down the musical notation.

In 1920s, when he was in his 60s, Tagore absorbed himself in painting.  His works won him a place among Bharat’s foremost contemporary artists. Besides, he wrote his autobiography shortly before his death on 7 August, 1941.

11 Sep 1942:  Netaji Subhas Chandra Bose, who was then at the founding meeting of the German-Indian Society in Germany, selected Jana Gana Mana as Bharat’s National Anthem. The song was played for the first time by the Hamburg Radio Symphony Orchestra as the national anthem of an independent Bharat.

1945:  In terms of movies, the song was first heard in the Hindi film, Hamrahi.

24 Jan 1950:  The Constituent Assembly of India declared Jana Gana Mana as Bharat’s National Anthem. However, they adopted only the first stanza from the original song as they did with Vande Mataram. In both was chosen the stanza that gave a geographical description of our motherland.

The Government of Bharat has embodied instructions on our National Anthem in the Information Sheet for people’s information and guidance. These include the correct versions of the anthem, the occasions on which it can be sung or played, about the need for paying respect to the anthem by observing proper decorum on such occasion.

It takes 52 seconds approximately to complete the formal rendition of Bharat’s National Anthem. And 20 seconds for a short version of the first and last lines, which can also be played occasionally.

The Supreme Court in Section 3 – Prevention of Insults to National Honor Act has upheld that all the patrons must stand up with proper respect when the National Anthem is being rendered.

All the cinemas nationwide must play before every show, the National Anthem accompanied by an image of Bharat Flag to instill committed patriotism and nationalism. The doors of the cinema hall are expected to be locked during the anthem to minimize disruption. This is the Supreme Court’s landmark judgment passed on 30 November, 2016.

Not to stand up will be considered disrespectful to the National Anthem though the patron may not join the singing.

Preventing or causing disturbance to an assembly engaged in the singing or playing the anthem will be treated as offence.

In the original Bengali poem only those provinces mentioned which were under British rule, i.e. Punjab, Sindh, Gujarat, Maratha etc. were mentioned. Those princely states (Kashmir, Rajasthan, Andhra, Mysore or Kerala) which were ruled by the Portuguese not mentioned in the anthem.

*Translated by Tagore on 28 Feb 1919 at the Besant Theosophical College.

By – Narayani (Independent writer. Commitment: ‘Sanatana Dharma that is Nationalism.’)

Cleric booked for objecting to national anthem inside mosque in UP