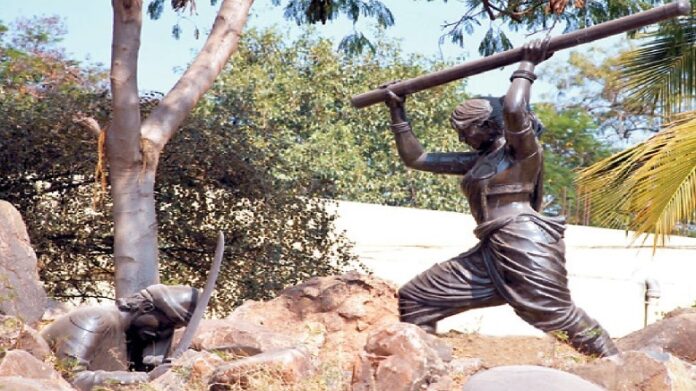 The Karnataka government has ordered a celebration of ‘Onake Obavva Jayanti’ on the 11th of November from this year. The Kannada and Culture Department had proposed celebrating the birth anniversary of Onake Obavva, a simple housewife who turned into a fierce warrior when the situation demanded.

She single-handedly prevented forces of Mysore’s Muslim ruler Hyder Ali, father of the tyrant Tipu Sultan, from sneaking into the Chitradurga fort in the 18th century.

As this report tells us –

“Almost every Kannadiga knows her name and how synonymous it is with the fort of Chitradurga. She has been remembered time and again through literature, movies and art.

The famous story of Obavva has been imbibed in the folklore of Karnataka. The strong fort of Chitradurga in present-day Karnataka was ruled by Madakari Nayaka in the 18th century. Hyder Ali, the Muslim ruler repeatedly tried to capture the fort of Chitradurga and defeat Madakari Nayaka. But the fort, made of stones provided a very strong opposition for the army to enter.

One day, Hyder Ali received a message from one of his spies that there is a hole in the stone fort of Chitradurga where one man can enter. An elated Hyder Ali decided to send his men one by one inside the fort and attack from either side. Accordingly, Hyder Ali sent his soldiers to execute his plan.

Kahale Mudda Hanuma was a humble soldier of Chitradurga who was deputed over the fort. His duty was to keep a watch on the fort from his spot and alert the soldiers if he spots anything fishy. Obavva was his wife. The couple lived in a small abode along the fort.

One afternoon, during lunchtime Obavva called her husband to have lunch. When he came in, she served him food and realised she forgot to get drinking water. She hurried to the nearby lake with an empty pot. Halfway along, she noticed enemy soldiers crawling through a hole and entering inside the fort. She rushed back home to alert her husband. Since he was having his lunch, she decided to take the matter into her hands.

She silently took an onake —A long wooden pestle used to beat paddy to separate the grains — from the kitchen and rushed to the spot where enemy soldiers were crawling in.

She stood on one side of the rock and hit the incoming soldier hard on the head with the onake. The blow was so hard that the man died on spot. She dragged the corpse aside so that the next soldier may feel all is going well on the other side. She continued this for some time and killed quite a number of enemies.

Meanwhile, her husband finished lunch and came searching for his wife. He had the shock of his life seeing his wife on a killing spree standing next to a heap of corpses. On noticing the husband, she told him to immediately alert the army. He climbed atop the fort and blew his horn (Kahale). Within no time, Madakari Nayaka’s soldiers rushed and finished Hyder Ali’s small troupe that stealthily tried entering. Obavva saved the fort and people that day. But while directing the army towards the enemy she missed the last soldier who killed her, says the folk story.

The hole from where enemy soldiers crawled in to die at Obavva’s hands was rechristened as “Obavvana Kindi” which is now a famous tourist spot. Her tale of courage is a very strong example that is taught to children in schools across Karnataka even to this day.”

It is time that such real heroes are included in history books across the nation, along with other forgotten icons like Rani Abbakka, Rani Durgawati, Lachit Borphukan, Gautamiputra Satakarni, Yashodharman, Lalitaditya, Krishnadeva Raya etc.