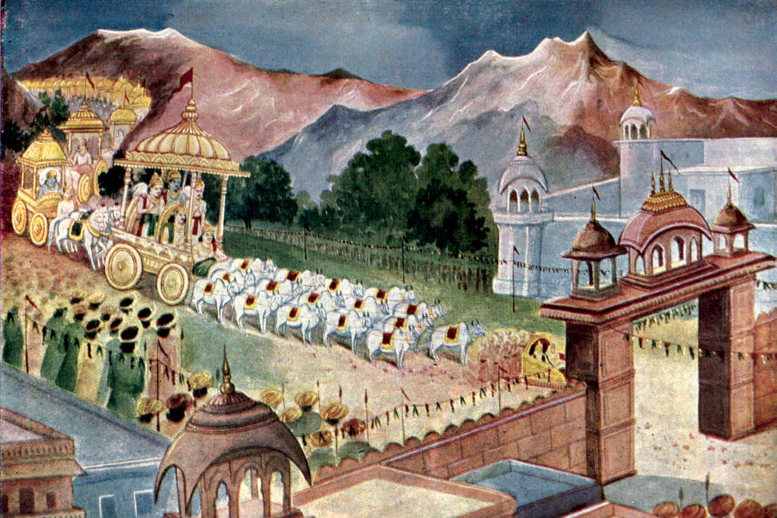 Hastinapur, located in present-day Uttar Pradesh, was the capital of Kauravas. It lies on the right bank of an old bed of the Ganga. The Pandavas ruled here for 36 long years after the Mahabharata war until the arrival of Kalyug. Hastinapur is also sacred to the Jain community as the 16th, 17th, and 18th Jaina Tirthankaras, Shantinatha, Kunthunatha, and Aranatha, were born in Hastinapura.

In the late 1950s, excavations were carried out at Hastinapur under the guidance of B.B. Lal, Director General of the Archaeological Survey of India (ASI). Lal is known for his “discovery” of 12 temple pillars beneath the Babri Masjid that provided the interpretive framework for the court-appointed Ayodhya excavation team.

During the excavation of the Pandava mound, painted grey ware was discovered belonging to the Mahabharata period.

These antiquities are said to be 3500 years old. Archaeologist Dr. DB Ganayanayak says that animal bones have been found, confirming that the people carried out animal husbandry even in the Mahabharata period. The domesticated animals include cattle, sheep, buffalo, pigs, and horses. The economy was both agricultural and pastoral. Rice was the main cereal produced by them.

Prof. Lal said the polished grey ware is the earliest common pottery connecting all the Mahabharata sites such as Hastinapur, Mathura, Kurukshetra, and Kampilya.

ASI recovered a copper sword and a horse-driven war chariot during excavation in Baghpat district’s Sinauli village, 90km from Hastinapur. The discovery of the chariot has raised several questions about the Aryan Invasion Theory. The findings from the “Mahabharata period”- because the epic mentioned chariots- pushed back the period to 200 BCE.

Houses were made of mud brick and kiln-burnt brick (size 44.5 x 25.5 x 7 cm). They were oriented along the cardinal directions. A sense of town-planning is thus in evidence. Punch-marked and copper coins testify to the developing economy, trade, and commerce, the former being silver, and copper, but the latter only of copper.

Five Periods (I-V) of occupation with a break between each have been identified.