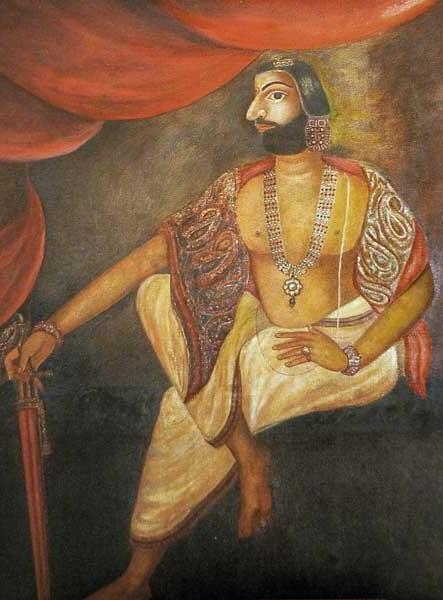 After the fall of Chera dynasty in Kerala during around 11-12th centuries, Kerala was divided into various small kingdoms. Among these the southern kingdom of Venad became prominent. The last Chera king moved his capital from Kodungallur in central Kerala to Venad (later Travancore) and merged with the southern Ay kingdom after the invasion by the Cholas. So the new kings with both Chera and Ay legacy ruled Venad from around 12th century onwards.

During 14th century, Venad also made adoption of princesses from Kolathu Nadu in north Malabar. Kolathu Nadu was earlier ruled by Mushika kings, who claimed Yadava origin just like the Ay kings of south who merged with the Cheras. From then onwards matrilineal system of succession became prominent in Venad instead of earlier patrilineal succession system with frequent adoptions made from north Malabar. Venad ruling family was then divided into various maternal branches in coming centuries. Thrippapur, Elayadathu Swaroopam, Desinganad etc were among them.

But during 18th century, a new prince Anizham Thirunal Marthanda Varma came to power in Travancore. He was born to queen Karthika Thirunal and succeeded his uncle Rama Varma. He also suffered a lot of torture and treachery from the hands of the Pillais, who did their best to eliminate him. The pillais also tried to murder Marthanda Varma and it is believed that he was helped in his attempt to escape from the pillais by Lord Krishna himself who showed him a hole on a tree (Ammachi plaavu) inside which he hid himself during the night away from the sight of pillais. Besides this tree, in remembrance of the incident he built the Neyyattinkara Sri Krishnaswamy Temple.

As a result of this, when he got into power, he quickly exterminated all the Pillais and their family without a trace, putting an end to centuries of murders and mischiefs. And after grabbing his rightful place in throne, he also unified the various maternal branches of Venad forcibly. Further he also conquered other regions like Kayamkulam (which was part of Chirava swaroopam, ultimately related to Venad), Thekkumkur, Vadakkumkur, Ambalapuzha, Meenachil etc and came till the borders of Cochin in central Kerala. This resulted in the formation of modern day Travancore from the medieval Venad kingdom.

For his help, he had an able Tamil Brahmin named Ramayya Dalawa as his Dewan and his Nair army under his command. After conquering these regions, he surrendered his entire kingdom to Shri Padmanabha through a ceremony named Thrippadidanam. As a result of this, Padmanabha became the real ruler of the kingdom, while Marthanda Varma ruled on his behalf and his representative by naming himself as “Padmanabha Dasa” meaning the slave of Sri Padmanabha. Commemerating this event, he also conducted durbar with the murti of Sri Padmanabhaswamy.

“The king of Travancore is of the Chodilecur Faction, a Nair by caste, adopted from the house of Colastry, [Kolattiri of Cannanore] and styles himself Cuchi Tambaran or the little king. This state was formerly divided among- five houses, Travaneore, Attinga, Eleda Surovan, Peritally and Signatty ; and since the four first states have been united, thoy form the most powerful state in Malabar . The other states have, without harmony (which is seldom found in the ruling families), little power ; but this chief on the contrary has with the help of the English, had all the noblemen of the state, both Pulas and Gurips, put to death or banished the country except the Pula of Bariatto. Since that time he not only rules supreme but by confiscating their goods and lands he has so increased his treasures and revenues that, he excels the other rulers in the greatness of his expenditure and was able to keep up the war against the Honble Company and the Signatty for four years, although in the meantime he had to pay considerable tributes at first to the Moguls and later on to the Mahrattas from the time the latter had taken possession of the Madura Coast.”

He also defeated the Dutch forces in Battle of Colachel, which made Travancore one of the first Indian kingdoms to defeat Europeans. The Dutch captain Eustachius De Lannoy surrundered and became a prisoner of war and the supremacy of Dutch in India by establishing colonies ended completely as a result of this battle.

Another source describes the army of Marthanda Varma as –

“The king (of Travancore) had disciplined, in the method of European infantry, a body of 10000 Nairs. The people of this denomination are by birth the military tribe of the Malabar coast, and asser in their own country even prouder pre-eminences than the Rajputs, who in other parts of India are likewise born with the same distinction.’

This Nair brigade remained as the personal troops of Travancore Maharajas even under the British . After the independence, this brigade was joined with the Indian army as 9th battalion of Madras regiment, the oldest one in Indian army,

Captain Lannoy also later helped in modernizing the Nair brigade of Travancore. With the help of the Dutch and assistance from the Cochin kingdom, Travancore built the Nedumkotta fort which later saved Travancore from the assault of jihadi Tipu sultan.

From Dutch records, it is clear that Marthanda Varma had planned to conquer whole of Kerala and re-establish the Chera kingdom or the holy land of Parashurama. The Dutch were very catious about this grand ambition of Marthanda Varma. This can be seen from the Dutch sources which describe the great king as –

“The present king [Marthanda Varma] is 37 years old, an able and untiring prince, but very cruel and so conceited and arrogant that he aims at nothing less than the supremacy over the whole of Malabar ; and no doubt he would have gained his object had not the Honble Company been in his way..”

“And although a peace should be concluded, one may very reasonably doubt whether it will be lasting ; since he strongly insists upon a promise from the Honble Company to remain neutral in case he goes to war with the Malabar chiefs, which sufficiently shows his ambitious intentions, and though it will be some time before his finances are i-e-established and besides most of his Cunjecutas [Kunjukuttakars] or picked Nairs have fallen, still I do not believe that he has altogether abandoned his high-flying design to make himself master of the whole of Malabar, and even if peace should be made, your Worship will have to watch.”

Source: Selection from the records of the Madras government, Dutch records No. 13 The Dutch in Malabar being a translation of selections Nos. 1 and 2 with introduction and notes.

For this, he conducted ritual named Hiranyagarbha to crown himself with the Chera Mudi (the crown of cheras which is still with the Travancore Royal Family) and obtained the title “Kulasekhara Perumal” (the title of Chera kings). Had his plans succeeded, we would’ve seen a unified Kerala from Malabar to Kanyakumari, and it would’ve resisted the islamic jihad waged on Kerala by Hyder and his son Tipu, thus averting the Islamization of Kerala, which is a radical Islamist hub currently.

It is to be noted that Marthanda Varma and his successor Dharma Raja though allied with the British for strategic reasons as his kingdom was surrounded by enemies in all sides, suppressed the Christian conversions in the kingdom. Missionary sources themselves are clear on this fact. He wanted Travancore to remain as a Hindu state, and conversions, was strictly forbidden during his times.

“The king of Travancore threatens with imprisonment and death every nobleman who shall quit his court to become a Christian, and who shall afterwards fall into his hands ; and indeed Nilam Pillai, an officer of a noble family, was shot at Aramballin because he refused to renounce the religion of Jesus Christ In the year 1787. I saw four Nairs thrown into prison at Tiruvanda-puram because they would not apostatise from the Catholic Church. The Sampradi did everything in his power to make these four abjure Christianity—even paid them a visit himself, and to gain his point employed every art of persuasion. As thew were not attended with success, his substitute proceeded to coercive means ; and not only tortured the prisoners with hunger and thirst, but even caused them to be scourged twice a day. They were, at last, trans-ported beyond the boundaries of Tovala.”

Thus contrary to the popular claim, Marthanda Varma was a staunch Dharmika monarch who wanted to restore the Chera kingdom to it’s former glory and rule the kingdom as a servant of Shri Padmanabhaswamy.