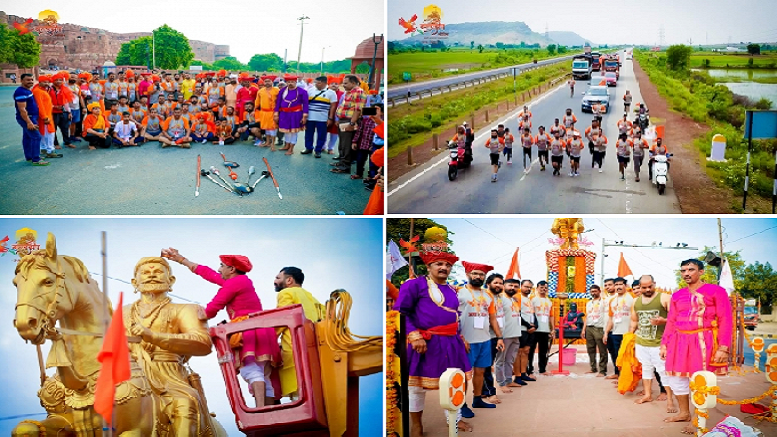 As the country marks the 355th anniversary of the revered Maratha warrior king Shivaji’s daredevil bolt from the clutches of the Mughals, a band of youth from Maharashtra are enacting that adventurous journey from Agra Fort in Uttar Pradesh to the Rajgad Fort in Pune.

On August 17, a 30-member group left the Agra Fort on the same presumed route taken by Shivaji, then 36, and his minor son Prince Sambhaji, 9, to break free from the 99-day long grasp of Mughal Emperor Aurangzeb and sneaked from there to reach the Rajgad Fort after a gruelling three-week long journey.

According to the coordinator of the first of its kind commemoration trip, Omkar Shinde, the exact ‘escape’ strategy or the supposed ‘route’ taken by Shivaji was so confidential that barely sketchy details are available even today.

Shivaji’s sojourn then went down in history as one of the most sensational escapes in the world that left the Mughals flabbergasted and fuming.

“We rely on the basic historical evidences and tales of that era for this trail, passing several cities and towns in UP, Rajasthan, Madhya Pradesh till Maharashtra. We are travelling in a truck, seven cars, three motorcyles, and one ambulance with a medical team. The participants take turns running stretches with the ‘torch’ (mashaal),” team leader Maruti Aaba Gole told IANS from Madhya Pradesh.

A far cry from the situation back in 1666 when there were no roads, no reliable maps or proper routes, or no arrangements for food or water, as Shivaji and his men lurked mostly through enemy territories in multiple disguises.

They had to go through dense forests infested with deadly wild animals, a hostile and difficult terrain, climbing mountains, or crossing valleys with flooded rivers as it was the height of monsoons, said Gole, 35, the 14th descendent of the head of Shivaji’s Infantry, Sarnobat Narveer Tilajirao Gole.

He said the Maratha king was first lured to Agra, publicly slighted in emperor Aurangzeb’s court and then whisked into captivity, where he meticulously planned his escape, ostensibly in baskets laden with sweets.

“All along, Shivaji had made arrangements to swap horses every couple of hundred kms, kept changing his disguises to avoid detection by the Mughal forces or spies as he mostly raced through enemy kingdoms with a handful of confidential aides. They completed the treacherous journey in around three weeks,” said Shinde.

However, to evade suspicion, Shivaji had left Prince Sambhaji under the care of an aide’s relative in Mathura, and arranged to bring him to the Rajgad Fort a few months later after the dust settled.

After a series of other historical exploits and multiple wars and skirmishes for the next eight years, he was coronated at his new capital, the Raigad Fort, to become Chhatrapati Shivaji Maharaj on June 6, 1674.

Another participant, Digvijay Jedhe, said the group is getting a rousing reception all along as it passes Sevla Ghat (UP), Dhaulpur (Rajasthan), Gwalior, Mohama, Guna, Devas, Indore, Junwania, Sendhwa (MP), Shirpur, Dhule, Malegaon, Nashik, Sinnar, Sangamner, Pune and finally to the Rajgad Fort, the first capital of the Maratha Empire.

On the final 20 km stretch of the 13-day long remembrance trail, 355 youth will run with ‘fiery torches’ to the Rajgad Fort next Sunday, culminating in a public reception to be graced by leading personalities, Shinde informed.

HinduPost is now on Telegram. For the best reports & opinion on issues concerning Hindu society, subscribe to HinduPost on Telegram.a