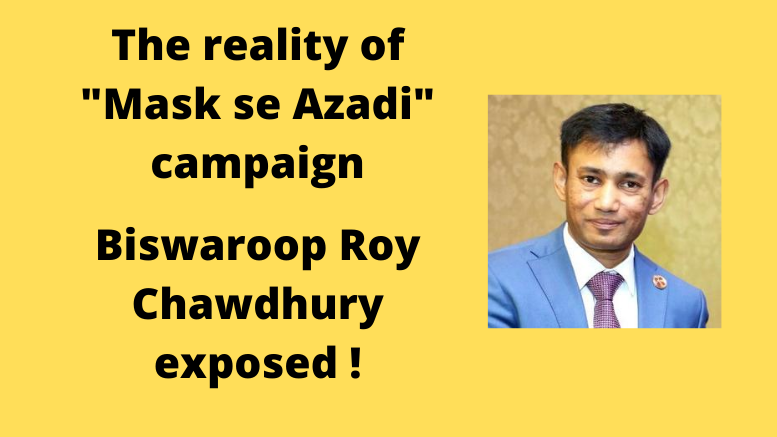 Recently, I came to know of a certain ‘Mask se Azadi’ campaign run by one Dr. Biswaroop Roy Chawdhury. The name rang a bell and took me back to a day in mid 2000s. A schoolboy at that time, I saw an advertisement in a newspaper regarding a seminar on “Dynamic Memory Methods” by one Biswaroop Roy Chowdhury. The seminar itself was designed to impress and many people must have attended his paid memory course afterwards. Having a decent memory at that time, I just went home.

Intrigued, I searched for the person on google. Lo and behold! he is the same person, now in a different avatar. Still giving seminars which were designed to impress. Only, the paid course was different this time around. So, I dug a little deeper for truth.

Who is Dr. Biswaroop Roy Chowdhury?

The details of early life of Mr. Chowdhury are sketchy. His profile on his website focuses on his various certificates, degrees, awards and diplomas and do not tell about the man behind these. Apparently, he studied Production Engineering from Punjab Engineering College, Chandigarh sometime in 1990s. Roy Chowdhury first publicized himself  as a memory master who could do impossible feats of remembering random things. He established a company called Memory Lab and according to an article from 2009, was running it successfully at 33 centers. The same article mentions that he has three Guinness book of World records, though one could not find it at the records database. The same article mentions him running an India Book of Records. More on it later in this article.

At the same time, Mr. Chowdhury was also trying his hands in Bollywood. He produced and starred in a movie called “Yaad Rakhenge Aap” in 2005. Apparently it also had seasoned actors such as Goofi Pental and Gajendra Chauhan. An article from the time on Zee News carries his claims that the movie will help in “boosting the memory” of the viewers. Ironically, no one remembers the movie! He was also involved in a legal case against Karan Johar for right on the title of “Kabhi Alwida Na Kehna“. He lost the case.

In 2013, we see a new Mr. Chowdhury. A Times of India article now called him Dr. Biswaroop Roy Chowdhury and mentioned that he was now taking seminars on exposing various corrupt medical practices. So, he had now stopped taking memory seminars, and ventured into health seminars. The same article says that he would show how diabetes, cholesterol, high BP, cancer, heart disease and thyroid treatments are profit driven and not for benefit of patient.

Since 2013, he has been repeating the same claims in respect of other diseases. He has written books on the issue and runs paid courses to make you a “Certified Practitioner” of health in a matter of days. He also runs diet and residential programmes for patients on a hefty fees. He has highly unscientific and controversial positions on many matters.

Biswaroop Roy Chowdhury has taken many positions in health matters, that are unscientific, controversial and downright harmful to patients

A master of deception and fraud

Biswaroop Roy Chawdhury is a master in deception and fraud. A consummate snake oil salesman, he has perfected a strategy to fool people. The elements of this strategy are:-

It is important that people make an informed choice in the matters of health. Following advice of snake oil salesmen like Mr. Biswaroop Roy Chawdhury, people may harm the health of their own and others. It is important that appropriate legal remedies be taken under relevant laws including Drugs and Magic Remedies (Objectionable Advertisements) Act, Indian Penal Code and Epidemic Diseases Act against him and other such people so that public health is not endangered.

Six “COVID control” policies that should be strongly opposed