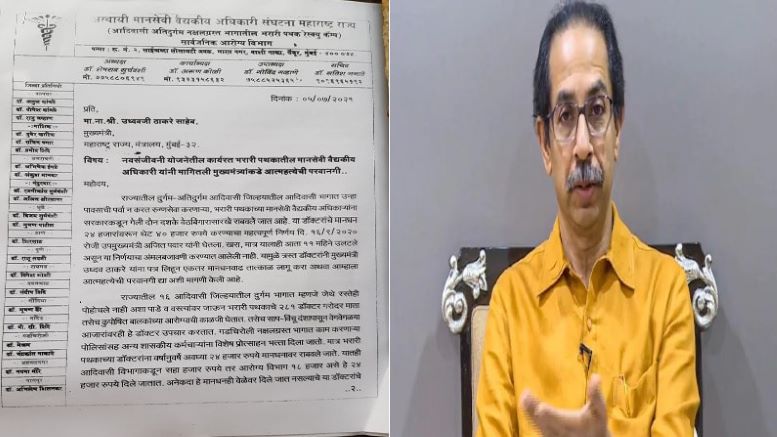 Highlighting the sorry plight of doctors under the Uddhav Thackeray-led MVA (Maha Vikas Aghadi) government, 281 doctors have written to the CM asking him to grant permission for suicide. The doctors who fall under the ambit of the state health department and have been posted in backward tribal areas have expressed their disappointment.

The letter comes in the wake of Swapnil Lonkar’s suicide who took the extreme step on Saturday after being denied a posting even though he had cleared the MPSC (Maharashtra Public Service Commission) exam. These BAMS doctors have been serving in 18 tribal districts of the state for close to 2 decades now, often visiting remotely located villages that don’t even have proper road access.

These doctors treat locals for various ailments including minor illnesses, snake-scorpion bites, treating malnourished children, etc. Dr. Sheshrao Suryavanshi said that police and government officials serving in areas overrun by red terrorists (Naxal-affected areas) are given special incentive allowances but we doctors have to make do with a mere 24000 rupees.

Expressing his disappointment with the MVA government, Dr. Suryavanshi said that even though doctors have been working in the remotest areas during the current pandemic and treating Corona patients there, the government hasn’t even shown an iota of humanity while extracting work from us doctors. In the September 2020 meeting between the doctors and deputy CM Ajit Pawar, Health Minister Rajesh Tope, and Tribal ministry it was decided that 281 doctors working in tribal areas would be given 40000 rupees instead of the present 24000 rupees. However, this decision is yet to be implemented.

Additionally, the doctors have highlighted that thousands of doctors’ posts in the health department have been lying vacant. Furthermore, MBBS doctors have refused to work in these remote areas but the government isn’t giving us permanent appointments despite the fact that we have been dedicatedly working in such remote areas for the last two decades.

They also stated that they had made several pleas to Health Minister Rajesh Tope and Additional Chief Secretary Dr. Pradip Vyas to increase their allowance and also give them permanent appointments. Dr. Rajan Tadvi informed the media that when the government didn’t implement the promised allowance increase, we wrote to the CM asking for permission to commit suicide.

He further stated that they weren’t conducting protests keeping in view the condition of the patients in such report areas. However, the government is refusing to be sympathetic to their plight. They are granted an allowance of 18000 and 6000 rupees from the health and tribal departments respectively but there is no guarantee that they would receive the said amount on time. Dr. Anil Koli asked “what are the doctors supposed to do if the government would pay the increased amount of 40000 rupees even as 10 months have passed since they made the promise?”

Even as psychologists have advised the doctors not to commit suicide following the death of Lonkar, several doctors said that they have been struggling for the past five years to merely live a decent life. “Will any psychologist tell us how much more time should we live on like this?” questioned the agitated doctors.