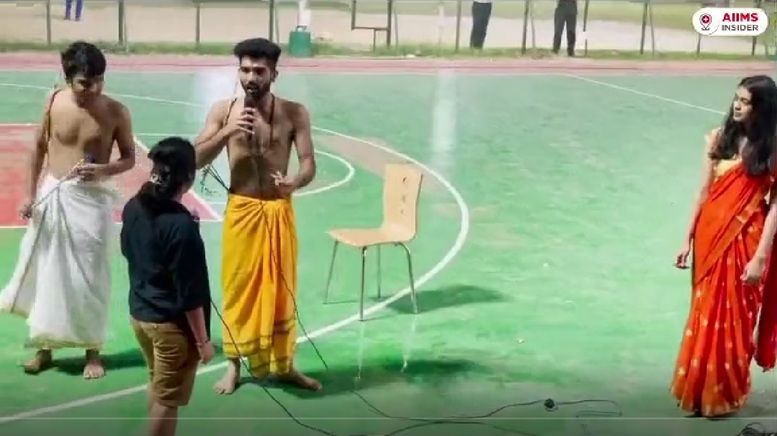 Unacademy has once again come to the fore of controversy and this time it is for denigrating the Ramayana. A video has surfaced on social media that shows a derogatory depiction of the sacred Hindu epic Ramayana by the students of AIIMS, Delhi. Soyeb Aftab, a student of 1st-year MBBS, is the video host of this travesty of Ramayana which is part of an Unacademy Vlog, as admitted by him.

The drama being enacted in the visuals features several actors dressed mostly in modern attire and performing a parody of the Hindu religious epic. The video also carries the logo “AIIMS Insider”

The entire script advances with this perversion of the epic in which slangs like “launde” has been used for the revered deities and characters of the Hindu faith; Shri Ram’s caricature has been shown mouthing dialogues of Bollywood movies and beheading Surpanakha, which is a complete perversion of what the Ramayana depicts.

Another clip shows Manthara telling Kaikeyi that her value has become less than the chakana (snacks) served at booze parties. Then, Kaikeyi says she shouldn’t have married a chapri (useless guy) like Raja Dasharatha and should have ‘run off with her college boyfriend’.

Meanwhile, the hashtag #AntiHinduUnacademy has already started to trend on Twitter with people expressing their angst over this debauchery showcased by students of one of Bharat’s top educational institutions.

The objectionable video has since been made private. Senior Advocate and BJP’s state spokesperson, Gaurav Goel on October 17 took to Twitter to inform that a criminal complaint will be filed against the founder & co-founder of Unacademy for maliciously and deliberately instigating religious feelings.

Back in September 2020, Varun Awasthi, an educator from this online edutech company was seen provoking students to pick AK-47 against Prime Minister Modi.

When the video created massive flak and the EduTech brand started to feel the heat, they tendered a clarification distancing themselves from the remarks made by Awasthi. With his video going viral and attacking public ire, Awasthi too removed the video from his Facebook account.

This is not the first time that Unacademy has practised this elaborate and evident disrespect for Hindu Dharma. In September 2020 again, the online coaching institution was exposed targeting the Brahmin community, sowing hatred among Hindus and denigrating Hindu sacred texts like Vedas.

Unacademy also faced public outrage for its brazen Hinduphobia projected through an examination paper dubbing Hindus as ‘stone pelters at Muslim religious processions’ earlier this year. The reality is the exact opposite.