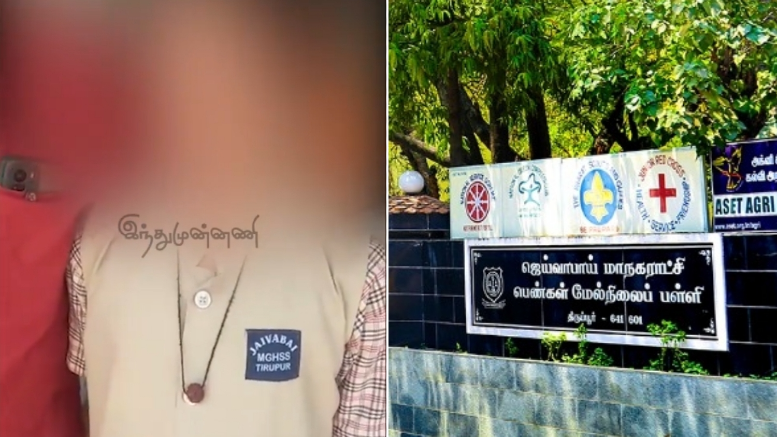 Another Christian proselytizing attempt in a government school has come to fore in Tamil Nadu. A 6th grade student has complained that Christian teachers in the government school where she studies abuse her for wearing Pattai (Tripundra) and writing Hindu deities’ names.

A girl studying in Jaivabai Municipal Girls Higher Secondary School in Tirupur, Tamil Nadu has said that Christian teachers in her school promote Christianity and abuse her for wearing Pattai (sacred ash). In a video posted by Hindu Munnani, the girl student says that the Tamil teacher, who is a Christian, asked them to pray by folding hands. When the children folded their hands in the Indic way she asked them to fold their fingers as well in the Christian way.

One day while taking class she asked “Who saved us by sacrificing their life?”. The girl says every child gave a different answer to which the teacher said, “Jesus gave his life for us. Why none of you say his name?”. She asked the kids to write something as homework to check their handwriting. The girl says she didn’t specify what they should write. So she wrote down the names of Muruga, Krishna and other Hindu deities she likes. But the teacher scolded her and told her that she should not write such things.

The English teacher, who is also a Christian as per the student’s account, asked her “How long does it take to wear that?”, pointing at the Pattai (Tripundra) she was wearing. The girl told her that it doesn’t take much time. After two days the teacher again called her and asked her “Who applies it on your forehead?”. The girl replied that she applies it on her own.

The girl says that she had struck some parts in her notebook on seeing which the teacher said, “How would it look if you scribbled on your forehead? That’s how it(notebook) looks”. At another instance, the teacher asked those who had scored less marks in the test to stand up. The girl says half the class stood up and she too did so as she also scored low marks.

Later everyone sat down so the concerned girl also sat down in her spot. The teacher, who was talking to some other girl, said, “Hey you Pattai wearing donkey, stand up”. She was also abused for wearing Rudraksha mala. The girl revealed that the students were asked to say Christian prayers as well. The girl complained to the HM who placated her saying such instances won’t be repeated in the future. Her parents have filed a police complaint but it remains to be seen what action will be taken on them.

Only a few days ago, a girl student studying in a government school in Kanyakumari complained of proselytisation attempts in her school. The Christian teacher had forced Hindu children to say Christian prayers and taught them that Hindus are Satans. She also advised them to read the Bible as it has good things.

While Christian teachers working in government schools proselytising is not new, the pro-Christian DMK government in power seems to have given them more confidence to act in such a way. If individuals in government schools are this brazen, nothing much is left to the imagination on what could happen in Christian schools empowered with a minority institution certificate.