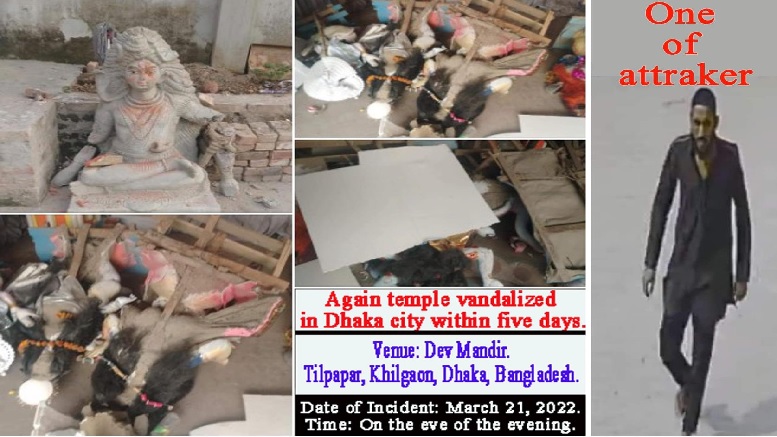 Just as Hindus of Bangladesh were reeling from the attack on an ISKCON temple in Dhaka, news has come of yet another attack by Islamic extremists on a Hindu temple in the capital city. The Tilpapara Deb temple in Khilgaon locality was attacked on Monday and murtis demolished.

Several Bangladeshi Hindu handles have shared news of this attack –

As per Hindu activists, due to persistent follow up by the temple members, the main accused Md. Ijazul Khan has been arrested by Khilgaon police. But whether he suffers any meaningful punishment remains to be seen.

On the eve of Holi, an Islamist mob had attacked the ISKCON Radhakanta temple in Dhaka, injuring 3 devotees and vandalizing and looting the temple, before police arrived and managed to drive away the attackers, for now.

ISKCON, Kolkata Vice President Radharaman Das spoke to media on the issue and demanded protection for Hindus from the Sheikh Hasina govt.

Last year, during Durga Puja, a mass pogrom was launched against hundreds of Hindu temples, homes and establishments in around half of the total 64 districts of Bangladesh after a manufactured ‘blasphemy’ incident at a puja pandal in Cumilla was used to trigger anti-Hindu sentiments. The ISKCON temple in Naokhali was also attacked in which 2 ISKCON volunteers/devotees died. Overall, at least 10 Hindus were reportedly killed and 23 rapes too were reported by human rights activists, although Bangladeshi media suppressed many incidents due to fear of the draconian Digital Security Act.

The Bangladesh government tried to brush that horrific pogrom under the carpet with Foreign Minister Dr. AK Abdul Momen claiming ‘cooked-up’ stories are being spread to embarrass the Sheikh Hasina government. While the Awami League (AL) government claims to be the protector of ‘secularism’ and blames the opposition BNP-Jamaat alliance for spreading Islamic radicalism, the fact is that often times AL leaders have been found complicit in persecution of the Hindu minority and grabbing their land.

Another video (archive link) has emerged of a ISKCON devotee Omani Krishna Das and other Hindus narrating how a local councillor Mohammad Kiran his goons are harassing them at East Tongi, Gazpiur district. An ISKCON temple is located in that township which lies just north of Dhaka city.

The above video ends as security personnel arrive at the scene and aggressively force the people to clear the area and stop recording their video testimony.