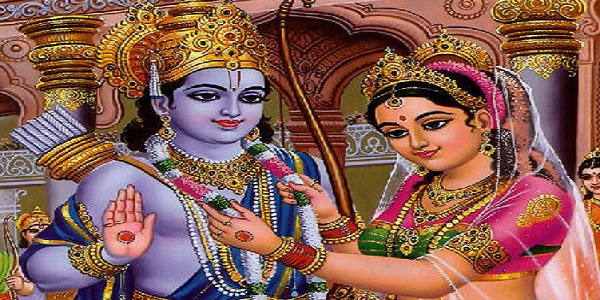 “Vivah Panchami” (celebrated this year on 12th December) is a day that marks the glorious wedding of Rama and Sita in Ramayana. Sita Kalyanam is an event that has fascinated Hindus for many centuries, across geographies. In fact there have been films dedicated to depicting Sita Swayamvar, notably in 1934, when there was a Tamil film titled “Sita Kalyanam”. The film was remade in Telugu and was a major hit.

Sita’s marriage, as we are all aware, was a “Swayamvara” – a practice where the husband is chosen among a wide range of suitors who are invited to the occasion. Particularly common in Vedic Bharat, among royal families.

Swayamvaras came in different types. Some involved the girl choosing her husband among a list of suitors by her own volition. Others involved an added step – the father of the bride posts a challenge, and gives his Kanya away to the person who meets the challenge successfully. The Swayamvara of Kunti, where Kuntibhoja’s foster daughter chose Pandu as her husband is of the former type. The Swayamvaras of Draupadi and Sita are of the latter type.

Sita’s Swayamvara occurs in Bala Kanda – the first book of Valmiki Ramayana. The great sage Vishwamitra takes Rama and his anuja Lakshmana along to the country of Mithila where the great king Janaka is holding the swayamvara for his daughter Janaki. The challenge posted by Janaka involves the successful lifting and stringing of the great bow of Shiva, that rested in the house of Janaka. A challenge at which many great princes failed until Rama came along. Here’s Janaka addressing Vishwamitra after the sage has reached Mithila,

“O Sage you are a tiger among asceties, you are faithful to your vows, I shall show this effulgent bow to your Rama, Lakshmana”

“O Sage if Rama could lift and string this bow I shall give my daughter Sita, not born from a woman, to him (son of Dasaratha)”

At Vishwamitra’s request, the bow is shown to Rama. But bringing the bow in front of Rama is no mean task.

“Virtuous Rama, the delight of the Raghus, in the presence of several thousands of men fixed the string to the bow and drew it as though with ease”

“Rama, the best among men, righteous and famous lifted the bow. Stringing it with a twang he drew it and broke it into two in the middle”

This feat stuns the crowd:

“On hearing the sound, except Janaka, Viswamitra and the two raghavas (Rama and Lakshmana) the rest of the people around fell down and fainted”

This is an interesting shloka that refers to not just Rama but also Lakshmana as a “Raghava” (belonging to the clan of Raghu).

After heartily expressing his elation at Rama’s feat, Janaka says –

“By receiving Rama, son of Dasaratha, as her husband, my daughter Sita will bring glory to my dynasty.”

“O Kaushika (i.e Vishwamitra) I announce Sita to be the ‘Reward of prowess’. My vow has come true. She is more valuable than my life and fit to be given to Rama.”

Then it occurs to Janaka that Rama’s father needs to be informed of his son’s triumph and the impending wedding:

“O Brahmarshi Kausika, be blessed With your consent my ministers will take the chariots to Ayodhya immediately.”

“That Sita, the reward of prowess is to be given to Rama be reverentially communicated in detail to king Dasaratha and he may be conveyed here.”

But Ayodhya is not too near Mithila:

“Commanded by Janaka the messengers travelled for 3 days, rested for three nights on the way and entered the city of Ayodhya along with their horses.”

This is interesting because 3 days of journey is just about right when one considers the presently understood locations of Ayodhya (Central UP) and Mithila (modern Bihar-Nepal border) and the modes of transport available at the time.

Dasharatha is overjoyed at the news, and tells the messengers that he will start with them tomorrow, to reach Mithila. It takes the entourage 4 days to reach Mithila from Ayodhya. Then Janaka and Dasharatha agree to undertake the wedding the following day, but only after Janaka completes a Vedic sacrifice:

The following day just before marriage, there ensues a detailing of the two clans that are coming together Vasishta, the priest of the Ikshvakus, takes the trouble of addressing Janaka at length, and listing the lineage of Rama. After listing all of Rama’s ancestors, he concludes,

“O King be gracious enough to give your equally accomplished two daughters in marriage to Rama and Lakshmana who are born in the family of Ikshvakus kings possessing the purity of race right from the beginning. They are highly virtuous, heroic, and truthful.”

But Janaka is not going to let this opportunity pass quietly. He responds with a detailed listing of his family’s lineage that culminates with Sita. Then he utters these words:

“I offer my daughter Sita, who looks like a celestial maiden to Rama and my second daughter Urmila (to Lakshmana). I proclaim 3 times so that there is no doubt about it.”

Then Janaka says something that suggests that gifting of cows often preceded weddings in those times,

“O Delight of the Raghus (King Dasaratha), I offer these brides with immense pleasure to Rama and Lakshmana. You may perform the rites for your forefathers by gift of cows. Prosperity to you. Thereafter you may perform the marriage.”

“Today the star Makha is on the ascendant. O King perform the marriage on the, third day from today under Uttara Phalguni star. Gifts may be given for the happiness of Rama and Lakshmana.” This suggests that gift-giving characterized marriages even back then.

In the meantime, there is also an agreement reached that Janaka’s nieces will also be married to Dasaratha’s two other sons – Bharata and Shatrugna.

“Let it be so, Be blessed Let these two daughters of Kusadhwaja (Mandavi and Srutakirti) be the wives of Satrughna and Bharata respectively and serve them.”

But the marriage does not happen immediately as suggested earlier in the text. A date is set, but in the meantime Dasharatha undertakes the Shraadh of his forefathers.

“The king (Dasaratha) performed the shraadh ceremony in accordance with the scriptures. Next day at dawn at appropriate time he gifted away cows (a ceremony performed by initiating the bridegrooms into the marriage.)”

Then Dasharatha engages in the donation of cows to brahmins.

“For the welfare of each of his sons the king (Dasaratha) religiously gave away a hundred thousand cows to brahmins.”

In the meantime, the wedding has a surprise visitor – Yudhajit, the prince of Kekeya, the maternal uncle of Bharata, Dasharatha’s second son.

“O King having heard in Ayodhya that you have arrived in Mithila along with your sons for their marriage I came here speedily with a desire to see my sister’s son.”

In the meantime Rama gets ready for marriage on the D-day.

“With the necessary auspicious rites preparatory to marriage performed at an auspicious moment, Vijaya, and keeping Vasishta and other maharshis in the forefront, Rama accompanied by his brothers adorned with ornaments of every kind came into his father’s presence.”

The daughters of Janaka have also completed the “rites” in the meantime.

“O Best of ascetics my daughters have performed all the rites relating to marriage. They (now) stand at the foot of the altar shining like the bright flames of fire.”

Then the king of Videha asks Vasishta to formalize the marriage. And Vasishta responds –

“Venerable and renowned ascetic Vasishta said “Be it so“. And with Viswamitra and virtuous Satananda in the forefront, an altar was duly improvised in the centre of the sacrificial pavilion. He adorned the altar on all sides with fragrant flowers, golden ladles, waterpots with holes filled with sprouts, earthen vessels with sprouts, holders of burning fragrant incense conch-shaped vessels, sacrificial ladles, bowls filled with with water for arghya and other purposes, vessels with roasted paddy and grains of rice.”

“Brilliant and worshipful rishi Vasishta chanted, mantras according to tradition, put the darbha grass of equal proportions around the altar, placed the fire on the altar, recited the mantras from the scriptures and offered oblations into the flame.”

“Thereafter king Janaka brought Sita placed her in the presence of Agni in front of Rama, the enhancer of the joy of Kausalya. And said “This my daughter Sita will be your partner in performing her rightful duty. Accept her. Farewell. Take her hand into your own. By being a devoted wife this highly fortunate Sita would always follow you like a shadow“. Thus spoken, he sprinkled the water sanctified with mantras (on them)”

The same procedure is then repeated for the other three brides. Finally –

“The great, noble princes of the race of Raghu, accompanied by their wives circumambulated the altar of the sacred fire. King Janaka and the sages in obedience to the directions of Vasishta and in accordance with the sastras conducted the matrimonial.”

The gods cheer to mark this occasion from their celestial heights. And finally everyone departs to their tents.

“Thereafter the descendants of Raghu along with their wives departed for their tents. The king (Dasaratha) also accompanied them with hosts of rishis and relatives.”

This is then followed by a confrontation of the party with Parashurama, a skirmish with the great sage, before the return of the boys and their brides to Ayodhya.

So that concludes our quick perusal of Sita Kalyanam. What is striking is the blow-by-blow account accorded to it by the poet – something that is seldom ever done for any other wedding. What is also striking is the keen attention to ritual, which typifies vaIdIka weddings to this day.

It is also interesting how Dasharatha does not neglect his duty of doing Shraadh, even on the eve of his son’s wedding. The elation at the impending good news does not cause him to forget his ritual obligations. Something for us all to reflect on and imbibe.

Author’s note:  The shlokas and the translations are excerpted from the fine IIT-Kanpur resource for Valmiki Ramayana.