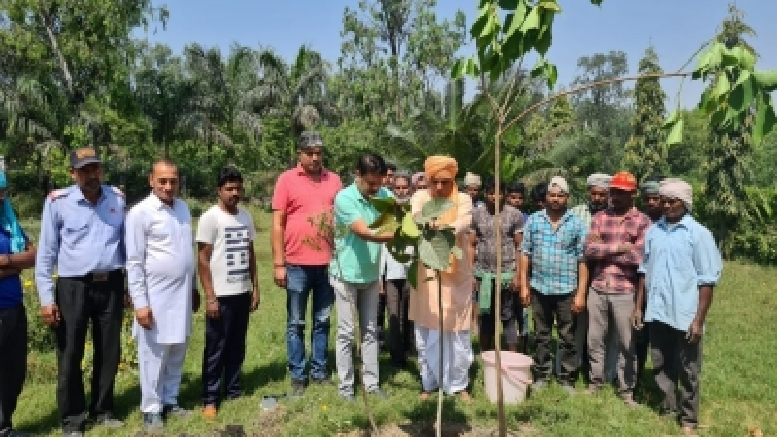 When there was talk of planting some trees at the grounds in the police post at Malarampura in Hanumangarh district of Rajasthan, constable Vindo Legha knew exactly what he should do. He planted a sapling each of banyan, neem and peepal in a triangle.

The three trees planted together in this fashion is called Triveni; as they grow their branches entwine and the three become one. “Planting Triveni is part of our traditions and associated with our faith,” the policeman told 101Reporters. “They emit a lot of oxygen into the environment.”

Not just in Hanumangarh, but across Rajasthan, Haryana and Punjab, there are many like Legha who enthusiastically plant Triveni, keeping the tradition alive. In Punjab, Triveni is grown in deras and temples whereas in Haryana and Rajasthan they can be spotted in many common spaces in villages, including schools, temples, dharamshalas and crematoriums.

Triveni trees are revered due to the belief that the trinity of Hindu gods — Brahma, Vishnu and Shiva — reside in them and are associated with divine, positive energy. Old, full-grown Triveni trees can provide a large canopy under their interlocking branches full of nesting birds for people to gather and are called ‘Nature’s Dharamshala’.

Himtaram Bhambhu, a Padma Shri awardee from Nagaur, Rajasthan popularly known as the ‘Tree Man’, said, “We believe that these three trees are the abodes of God. They are held in respect. And they are of special importance to the environment because of the long lifespans of these trees. Once we plant them, they give oxygen for hundreds of years. The peepal, or Bodhi tree, can live up to a thousand years.”

Antaryami Kaushik, Assistant Professor of Botany at Government College, Lunkaransar (Bikaner), said that neem trees have been observed to live up to a maximum of a hundred years, while peepal and banyan trees can thrive for hundreds of years. These two trees also have a special property that gives them the ability to release oxygen throughout all 24 hours of the day, unlike other plants that generally have a 12-hour-cycle where they alternatively release oxygen and carbon-di-oxide. “So they are able to release more oxygen than other trees,” he said. “That’s why our sages said these trees were holy, the abode of the Gods. And our people have been planting these trees for centuries.”

The religiously-inclined consider the act of planting and caring for Triveni trees as a yagna, or worship. And because of its significance to the community, a Triveni is never cut down. Pandit Satyapal Parashar, a spiritual orator or bhagwat katha vachak, said, “Peepal, banyan and neem have scientific and spiritual significance. Our ancestors protected them as living forms of God. Planting, watering and nourishing these trees is a great virtue. That is why the tradition of planting the Triveni is still alive, despite the challenges faced by the environment today. I travel around many villages and towns and when I see Triveni everywhere, I feel very happy.”

Communities who live around Triveni widely believe and know of the many medicinal properties of the three trees. Everyone we spoke to had something to say on the subject. The bark of the peepal is beneficial in curing ulcers and throat inflammation; its roots can be used for easing arthritis, its leaves for setting right constipation, the seeds for removing urinary disorders and ripe fruits for coping with heart diseases. The neem has traditionally been used to cure itching, skin diseases, diabetes, intestinal worms, diseases of teeth and gums etc. The banyan tree’s bark, milk, leaves, fruits and roots have the potential of curing hundreds of ailments such as diseases involving ears, stomach, teeth, gums, urinary tracts, skin, cough, cold, blood vomiting, menstrual disorders etc, they said.

Satyavan, a government teacher known as ‘Triveni Baba’, has been campaigning to plant trees in Haryana for the past 27 years. He has planted more than 40 lakh saplings, and among them are 50,000 Triveni. “There is no village in Haryana where the community has not planted the Triveni. People still follow the age-old traditions around the Triveni,” he said. “Neem, peepal and banyan are huge trees and a large number of birds take shelter in them. These birds eat their seeds and carry them far and wide. Under favourable circumstances, these seeds can germinate, grow and become giant trees themselves over the years.”

‘Baba’ Satyavan, a resident of Bisalwas village in Haryana’s Bhiwani district, said his campaign has been influenced by the philosophies of Swami Vivekananda. In 1994, he planted Triveni saplings in Khejarli village in Rajasthan, famous for being the site of the massacre in 1730 of 363 people of the Bishnoi community. Led by a woman named Amrita Devi, now revered as ‘Mother’, the hundreds of people sacrificed their lives to protect the felling of Khejri trees for a new royal palace.

Recognising the rich folk tradition and scientific merits, the forest departments in Haryana and Rajasthan have been giving importance and priority to Triveni under their plantation programmes. Rajasthan’s Additional Principal Chief Conservator of Forests, KC Meena, said, “Our society has been protecting the environment through traditional methods since ancient times. Now, while planting saplings in the state, the Forest Department gives preference to Triveni. There are two factors behind this. One is the common people’s reverence towards the Triveni trees. The other is their long lifespan. Peepal and neem live for hundreds of years. There is no limit to the age of the banyan.”