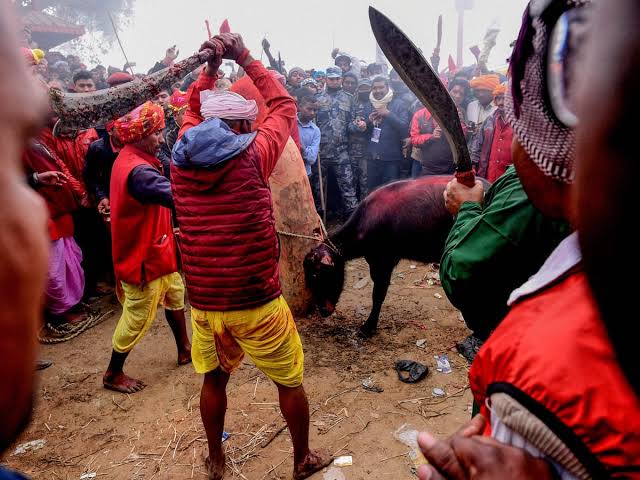 A sub-inspector has been allegedly suspended for sacrificing a goat in a temple in Rajasthan. Media reports reveal that it was a result of a twitter handle tagging a video of the man performing pashubali and the involvement of animal welfare activists and organisations. In the name of animal rights many Hindu festivals and customs are purposefully described as causing harm to animals in an attempt to slowly destroy them from our culture.

Targeting Gokulashtami by advertising not to use gau milk, campaigning against raising elephants in temples, a prevalent custom in South Bharat, trying to ban pashubali citing animal rights, etc. have been going on for some time in the name of saving animals. However, suspending a policeman for following his family ritual is a new feather in the cap of Hindu haters masquerading as animal rights activists.

Banwar Singh, a sub-inspector posted as Station House Officer in Deoli-Manjhi police station of Kota district is the victim of this incident. In a 54 second video doing rounds on social media a man can be seen cutting off a goat’s neck as sacrifice. Animal rights activists are said to be claiming that it’s Banwar Singh and have registered a complaint on him but on what grounds is not reported anywhere.

The alleged incident took place on February 19th when Banwar Singh took part in his grandchild’s tonsuring ceremony and pashubali seems to have been a part of it. Media reports claim that Kota rural SP Sharad Choudhary had ordered an inquiry into the matter and that based on the reports of the preliminary investigation he has been suspended with disciplinary action initiated against him. However there are also reports that SHO of Kasbathana, where the incident took place, denied any knowledge of a suspension order and said that the investigation is still underway.

The incident has shocked many as an individual’s rights to practice his religion freely has been infringed upon. Many pointed out the fact that such activists and organisations go silent when the streets are flooded with the blood of animals sacrificed on Eid. It is to be remembered that animal rights organisations obtained a ban on pashubali performed in Tripura’s Tripura Sundari temple in the state’s High Court on which the Supreme Court put a stay. Another similar ban order was obtained in Odisha which also was stayed by the SC.

To give or not to give: ‘Kanyādāna’ in an age of idiocy and instantaneity