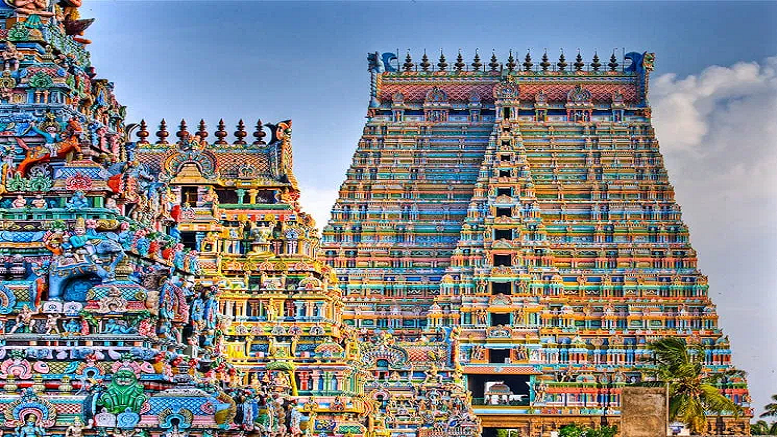 Srirangam is also considered the first and the foremost of the 108 main Vishnu temples (Divyadesams). This temple is also known as Thiruvaranga Tirupati, Periyakoil, Bhoologa Vaikundam, Bhogamandabam. The temple complex is situated in 156 acres of land.

It has seven prakaras or enclosures that said to represent seven chakras related to our body and soul. These enclosures are formed by thick and huge rampart walls. There are 21 magnificent towers in all prakaras providing a unique sight to any visitor.

This temple lies on a very small island formed by the twin rivers Cauvery and Coleroon (also known as Kollidam, a tributary of Cauvery). The temple Rajagopuram, one of the largest in Asia, makes for architectural grandeur at 237 feet above the complex base, moving up in 11 ascending tiers.

The abode of a deity often described as Nam Perumal and Azahagiya Manavaalan, meaning “our god” and “beautiful groom” respectively in Tamil. The magnificent Ranganathaswamy Temple  at Srirangam is home to Bhagwan Ranganatha, a form of Bhagwan Vishnu in a reclining pose.

In Tamil literature Divya Prabandam consists of 3892 Tamil verses composed by 12 Vaishnav saints known as Alwars prasing Bhagwan Vishnu along with 108 benedictory verses on Sri Ramanuja, totaling to 4000. These 4000 vesres are known as Pasurams. The 12 Alwars include Andal (female poet –saint) who composed 30 verses in praise of Bhagwan Vishnu known as Tiruppavai.

There are as many as 247 pasurams or hymns in Divya Prabandham in praise of the Sri Rangam temple and its presiding deity Sri Ranganatha Swamy.

One can find historic inscriptions on the temples walls in various languages such as Sanskrit, Kannada, Tamil, Oriya and Marathi. Inside the vast compound area there are 81 shrines, 21 gopurams and 39 grand pavilions. There is a hall of 1000 Pillars built during the Vijayanagara period (1336–1565).

This granite structure features a mandapam (hall) as well as water tanks in the centre. The temple has several water tanks and granaries. Of the temple’s 12 major water tanks, the surya pushkarini and chandra pushkarani, are two large water tanks can hold as much as two million litres.

The multiple granaries in the temple ensure the temple kitchen is well-equipped to serve visitors, the lesser privileged as well as the local population. Temple chariots such as the Garuda vahana, Simha vahana, Hanumantha vahana, and Sesha vahana are some of the most significant ones present in the temple complex that play an important role during festivals.

This temple underwent many changes during the rule of Cholas, Cheras, Pandiyas, Hoysalas, Vijayanagar kings and Nayak of Madurai.  The Sesharaya Mandapam on the east side of the fourth enclosure constructed during the Nayakas period consists of monolithic pillars with sculptures of wild horses bearing riders on their backs, trampling their hoofs upon the heads of rampant tigers.

The Garuda Mandapam (hall of the legendary bird deity of Vishnu, Garuda) located on the south side of the third enclosure is of Nayakas period which contains a free-standing shrine of large seated figure of Garuda; the eagle-headed God facing north towards the principal sanctum.

The complex has over 640 inscriptions that offer insights into religious and social influences during the medieval era and its economy and culture over a period of thousand years.

The Archaeological Survey of India has devoted an entire volume (XXIV) in its South Indian Inscriptions series to record the inscriptions copied from the temple. Inscriptions also throw light that the Srirangam temple was one among the handful of temples which have had an Arogyasala (Health Centre) that had rendered medical service to the people.

The oldest of the inscription available on Srirangam temple dates back to 10th century the period of Adhithyan-I who was also popularly known as Rajakesari Varman.

The walls of the temple complex are painted with exquisite paintings using herbal and vegetable dyes portraying various Gods and Goddesses. The murti of the main deity is unique that it is not made of granite as in many temples, but stucco (a unique combination of lime, mortar and stones bound together by a special paste (Thailam), made of musk, camphor, honey, jaggery and sandal).

Among the various vahanas of the Bhagwan Ranganadha Swamy is Yanai Vahana (i.e., Gaja Vahana) that has four tusks. These four-tusked elephants are known as Gomphotheres, which are said to have evolved around 38 million years ago and became extinct about 15 million years ago when the shaggy and two tusked Mastodons increased in population.

Even though it is a seven prakara temple, Sri Ranganathaswamy Temple has eight enclosures. The outermost enclosure known as Adaiavalainjan is not a prakara. It takes a functional name – an encircling space.

Angkor Wat in Cambodia is considered to be the largest temple complex in the world but it has no living traditions though it is of archeological importance. Sri Ranganathaswamy Temple maintains its centuries old ceremonies and traditions and is an outstanding example of a traditional human settlement, a Temple-Town which is representative of Tamil Culture over the centuries.

Unlike Madurai and Chidambaram, which are examples of settlements around a temple, Srirangam is a settlement within the temple. While Angkor Wat is an archaeological site, Sri Ranganathaswamy Temple is the largest functioning temple complex in the world.

Valmiki Ramayana, Padma Purana and Matsya Purana refer to the Srirangam Bhagwan Ranganadha Swamy. Ahananuru , and Silappadikaaram that belong to the early sangam period and later sangam period respectively of Tamil literature have reference to this temple and its festivals (Ahananuru belongs to the first 3- 4 centuries of Christian era).

The Sanskrit hagiology of Alwars and Acharyas “Prapannamrutam” written by Anantarya during 16th and 17th century has several references to this temple. The famous Vaishnavite philosopher Ramanuja (1017-1137 CE) lived in this place for several years. He laid down several instructions on the temple administration and festivals that are followed to till date. Rajagopuram at the southern entrance was built in 1987 with 222.5 ft height of tower and 12.5 feet height kalasams on top of the tower.

In the North West corner of the Arjuna mandapam, there is a murti of Thulukka Nachiar, a muslim woman. She was an ardent devotee of Bhagwan Ranganatha who attained salvation at Srirangam.