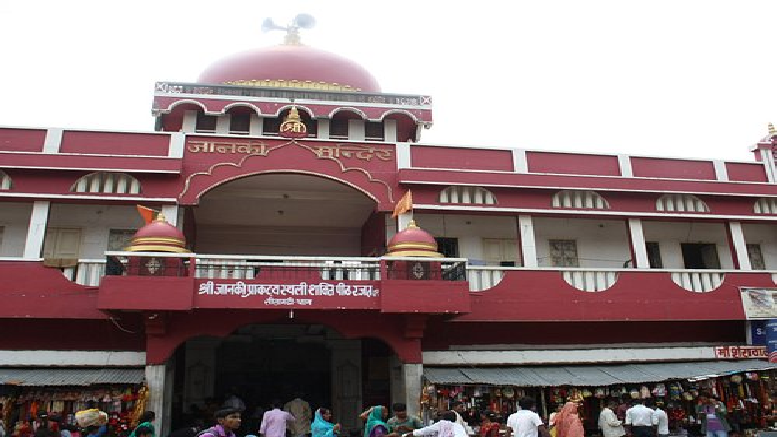 Sitamarhi is a city and the district headquarters of the Sitamarhi district in the Mithila region of Bihar. The Bihar government declared Sitamarhi a municipal corporation on 8 April 2020.

A rock-cut sanctuary from the great Mauryan period is found near Sitamarhi. Rama Navami festival is widely celebrated at Sitamarhi with a large fair held to mark the occasion, with considerable trade in pottery, spices, brass ware, and cotton cloth.

A cattle fair held in Sitamarhi is the largest in Bihar state. The town is sacred as the birthplace of the Maa Sita (also called Janaki), the wife of Bhagwan Rama.

According to Hindu itihasa, Sita was born out of an earthen pot while her father, King Janaka, was plowing the fields nearby, praying for rain. It is claimed that the king built a tank (water reservoir) at the place where Sita was found. It is said that King Janaka, after the marriage of his daughter Sita, installed the stone figures of Rama, Sita and Lakshman to mark the site. This tank is known as Janaki-kund and is south of the Janaki Mandir.

In course of time, the land turned into a jungle and about 500 years ago, a Hindu ascetic, named Birbal Das of Ayodhya came to know the site by divine inspiration where Sita was born. When he came down from Ayodhya and cleared the jungle, he found the images installed by King Janaka and built temple over there and commenced the worship of Sita. The current Janaki Mandir is apparently modern and is about 100 years old.

Sitamarhi also has temples devoted to Hanuman, Mahadev, and Ganesha. In Janaki Mandir, a marriage ceremony of Bhagwan Ram and Sita Mata happens every year. It lies on the western bank of the Lakhandai River in the fertile Middle Ganges (Ganga) Plain.

Sitamarhi town however contains no relics of archaeological interest. It is also believed that at this place Maa Sita had absorbed herself in the earth. Here is a 110 feet high statue of Hanuman ji, which is quite popular among the tantriks, from all over the country. Inside the temple, there are many architectural pieces engraved, related to the incidents form Ramayan. This is a famous sidhha peeth, where the statue of Hanuman is facing south (Dakshinmukhi Hanumanji)

How to reach Sitamarhi?

Sitamarhi is surrounded by Muzaffarpur, Motihari, Madhubani which are around 33 km, 35 km, 39 km away respectively. These places are ideal spots for tourists to plan their short weekend break.

Jeeps, private buses, bullock carts, and cycle rickshaws are the popular modes of transport in Sitamarhi. This place lies approximately 12 kms away from Grand Trunk Road towards Ganga River side in between Allahabad and Varanasi. From Allahabad, after Handia one has to take right and from Varanasi after Gopiganj one has to take left to reach Sitamarhi.

Sitamarhi is on the National Highway map of Bharat with NH 77 and NH 104 connecting it with other parts of the country. There are frequent buses to Patna  and Muzaffarpur from Sitamarhi.

The airport is in Patna, 120 km away (but Janakpur in Nepal is the nearest airport at 56 km away but has daily flights only from Kathmandu).