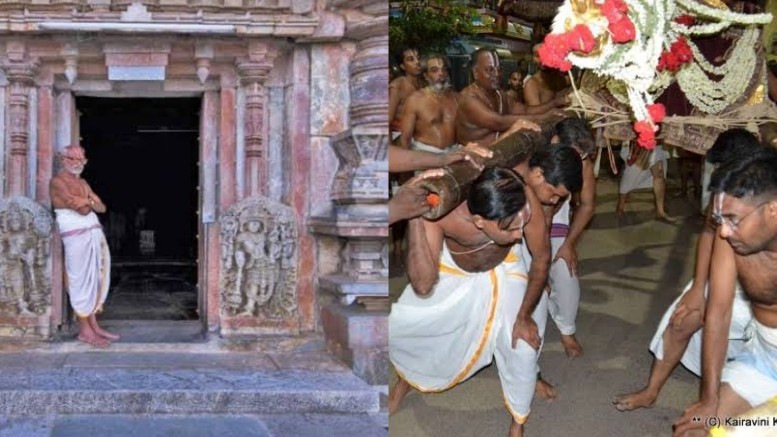 The DMK government in Tamil Nadu has amended the rules of the Hindu Religious and Endowment Board Act to transfer temple staff, which includes pujaris, as it wishes. Unfortunately, the court has ruled that the amendment is valid even though it gives powers to the government to transfer pujaris from temples following different sampradayas. After appointing people who were certified as pujaris after two years of crash course, the DMK government is still relentless in destroying the ethos of Hindu community.

In October 2021, the DMK government amended Rule 17 of the Tamil Nadu Hindu Religious Institutions Employees (Conditions of Service) Rules, 2020 to give powers to the Commissioner of HRCE to transfer temple staff as he sees fit. Temple staff includes pujaris, those who work at madapalli(temple kitchen where prasadam is made) and other servitors as well. In general, these people work in temples for generations and learn traditions from their predecessors from childhood.

Even though Agamas are common for some temples, each temple has a different set of traditions and customs they follow. Festivals, utsavams, prasad and almost everything varies from temple to temple. Transferring pujaris and other staff even among temples that follow the same Agama wouldn’t be appropriate. Transferring them to temples that follow different sampradayas is a sure shot to mess up the centuries-old traditions and gradually stop them.

It appears that the amendment made by the DMK government gives powers to the Commissioner of HRCE to transfer temple staff anywhere, even from Shaivite temples to Vaishnavite temples, which the Tamil Nadu Senior Grade Temple Staff Association challenged in the Madras High Court. They argued that religious customs might be disturbed by transferring indoor employees such as pujaris and maniams from a Shaivite temple to a Vaishnavite temple.

However the court ruled that “The possibility of a wrongful exercise of power under an enabling rule or the circular cannot be a ground to declare the very rule or the circular itself as unconstitutional,” and held the constitutional validity of the amendment. It appears that the government and HRCE submitted in the court that “no agamas or religious practice of any temple or religious institution would be affected in any manner because of the transfer and that even the salary, seniority and promotions of the temple staff would not get affected in any way“.

But DMK allies and sympathisers have been baying for Brahmin blood after the ruling. A communist tweeted, “The fraud of archakas who stole as a family citing “It is violation of Agama to transfer archakas from one temple to another” is coming to an end. Now there is a chance for all-caste archaka appointment. They’ll run to the SC. Be careful!”

In replies, many have abused Brahmins saying “they considered temple as their family property and are rattled now”, Su Swamy (Subramania Swamy) will come holding up the thread now”, etc. One of them was glad that now temples can be administered like Public Sector Units. The DMK government had earlier fired archakas serving in temples without a salary for a decade to replace them with the newly minted crash course archakas. In this light, the amendment of the rule is seen as an attempt to only further its agenda to wreak havoc in centuries-old temple ecosystems.

The other issue of the meager income of temple staff is also neglected. Many archakas in small, remote temples receive a measly amount of a few hundreds as salary. If they are transferred to new places where no accommodation, donors or other modes of income are available it would affect their lifestyle greatly. Even other temple staff face the same issue. Sripadham Thaangis, servitors who carry the deities during utsavams and festivals, faced financial hardships after Covid-19 induced lockdown when festivals were banned.

“In some temples for one procession, some ten of us get ₹120 totally,” the President of  Sripadham Thaangi Welfare Association said to The Hindu. An official of the HRCE department admitted that “They are not paid for the physical labour that they put in”. The amendment made by the DMK government aims to get rid of such dedicated people who serve the temples even without receiving enough materialistic benefits thereby gradually destroying the unique customs and traditions of different temples and running them like Public Sector Units as their supporters so desire to.