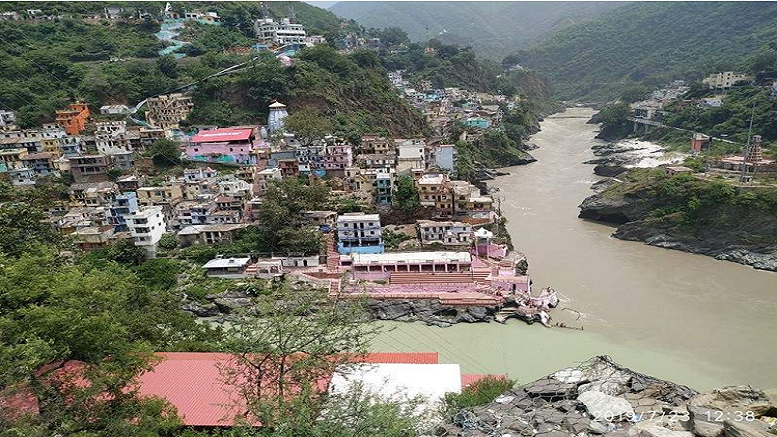 Raghunathji Temple (also called Tirukantamenum Kadi Nagar) is a Hindu temple located in the temple town of Devprayag in Uttarakhand, Bharat.It is one of the 108 Divya Desams along with Badrinath and Jyothirmath as per the Nalayira Divya Prabhanda of the 12 Alwar saints. It is located uphill on the confluence of Alaknanda and Bhagirathi rivers. It finds mention in four sacred Puranas (Padma, Kurma, Agni and Matsya).

The deity of this temple is Bhagavan Raghunathji (Sri Rama)/Neelamega Perumal along with Maa Sita.

In the Ramayana, the intense war between Dharma and Adharma ends with the victory of Bhagavan Rama over the Asura king Ravana who had kidnapped Sri Rama’s wife Sita.

But Sri Rama had committed the unforgivable sin of Brahmahatya (killing of a Brahmin) as Ravana was the son of the sage Vishravasa and Kaikasi, daughter of Sumali, grandfather of Ravana.

In order to atone for his sin, Sri Rama journeyed to Devprayag and started doing penance. One day,as he was busy in his worship in the holy waters, an apsara called Pushpamala ran to him seeking protection from a crocodile that wanted to eat her. He killed the crocodile with his sword after which the sword vanished in heaven.

The temple was originally in existence from the 9th to 10th century. The temple was originally believed to have been established by Adi Shankaracharya during the 8th century, with later expansions by the Garhwal dynasty. Garhwal (also the ruling dynasty), the region in Himalayas, where the temple is located, is referred to with the name for the first time in a copper plate inscription in the temple from the period of Raja Man Shah during 1610.

The region was ruled by Raja Prithvi Pat Shah as seen from the inscriptions in the door and doorways in the temple dated to 1664. King Jai Kirthi Shah who ruled the region during 1780, ended his life in the temple as he was betrayed by his courtsmen.

The temple has a single precinct and all the shrines are enclosed in enclosures. There are a number of smaller shrines in the temple for Bhagwan Badrinath, Adi Shankaracharya, Bhagwan Shiva, Maa Sita and Hanuman around the central shrine. The central shrine houses the image of Raghunathji, a granite image in standing posture.

The central shrine has a Deula, the conical roof over the sanctum which is found in Bengali and Orissa temple architecture. Devprayag is located at an altitude of 618 m (2,028 ft) from the mean sea level.

There is a Vataka (Banyan) tree where Vishnu is said to reside in its leaves.This tree has withstood all natural disasters throughout the ages.

As we proceed to the temple after a bath in the river, we can notice the footprints of Sri Rama on a huge rock.