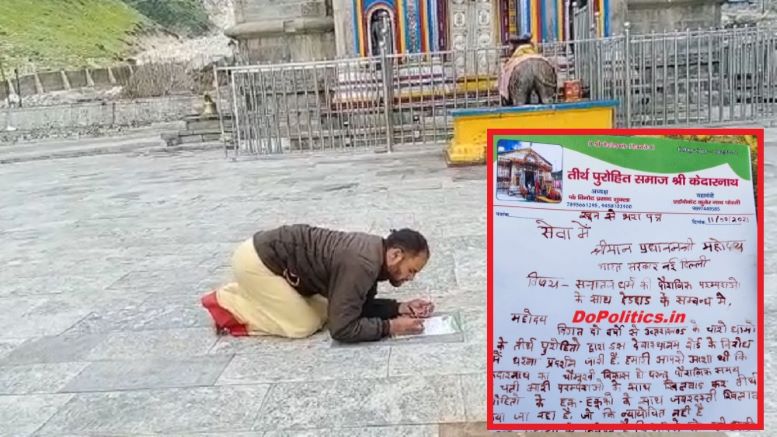 Priests of Kedarnath Temple have written to PM Modi calling for abolishing the Devasthanam Board. The tussle between the government on one side and Hindu devotees and priests on the other has been going on for some time now. The protesting priests have warned that they would undertake protests across the state.

In an effort to pressurize the government, the priests resorted to a novel method of protest by writing a letter in blood. Santosh Trivedi, Vice President of All India Tirth Purohit Yuva Mahasabha, wrote to PM Modi in his blood demanding the abolishment of the Devasthanam Board.

In addition to demand to abolish the board, Trivedi says in his letter that priests of Uttarkhand’s Char Dham have been protesting against the board for the past two years. Although the priests are in favor of the all-round development of Kedarnath, at the same time they want the ancient traditions aren’t tampered with. The letter further highlights that such tampering would only amount to forcibly taking away the rights of the priests.

Trivedi informed that the police on Monday asked the priests to not carry on their dharna protests following which there has been discontent and anger among the priests. He added that they are being pressurized to discontinue protests citing the previous years’ orders. He said that the priests are determined to fight on and won’t come under any pressure and also warned of state-wide protest from 17 August.

The priests are dissatisfied with the constitution of the Devasthanam Board which they say would take away their traditional rights. Char Dham Devasthanam Management Act, 2019 is a law that facilitated the takeover of Char Dham and 51 other Hindu temples by the govt of Uttarakhand by creating a Board that now controls the temples.

Trivedi had to be previously admitted to AIIMS as his health deteriorated.

The health of Santosh Trivedi, a priest from the Kedarnath shrine, worsened today and he had to be airlifted to AIIMS Rishikesh. Mr. Trivedi had been protesting for the last few months against a law that facilitated the takeover of Char Dham and 51 other Hindu temples by the govt of Uttarakhand.

Santosh Trivedi had started a unique way of peaceful protest against the Act on June 12. He would sit outside the temple bare-chested and meditate as a mark of protest. However, the government has not responded to the protests. With the temperature falling in the hills of Uttarakhand, it was certain that at some point his health would deteriorate.

The major bone of contention is the hereditary rights of priests of the shrines. The act extinguishes most of these rights that they have kept for generations by serving in extreme climates. A PIL was filed in the Nainital High Court by Subramanian Swamy against the Act, but the court ruled in favour of the state in June.

Hindupost has covered the issue in detail highlighting why the priests have resorted to protests:

The Uttarakhand BJP govt recently passed an act to bring under govt control and management, the Char Dham temples of Gangotri, Yamunotri, Kedarnath, and Badrinath along with 51 other Hindu temples. This act has led to much discussion and debate. While local priests opposed the act, the govt did not back down. The act was challenged by the various parties including Dr. Subramanian Swamy in Uttarakhand High Court.

The recent judgment of the court upheld the validity of the act while reading down a contentious section 22 that vested the properties of the temples in the body created under the new Act. The court said that right to manage own religious affairs is given under Constitution Article 26, only to a “religious denomination” and contended that Hindus professing Sanatana Dharma cannot be called a religious denomination. Readers must note that the Sabarimala case rests on the point that Ayyappa devotees are a separate religious denomination. Thus mainstream Hindus has no such rights, but specific sects might have. How right or wrong this provision is for wise readers to think about!

It remains to be seen how the government will react to the letter and what steps will be taken to pacify the priests.