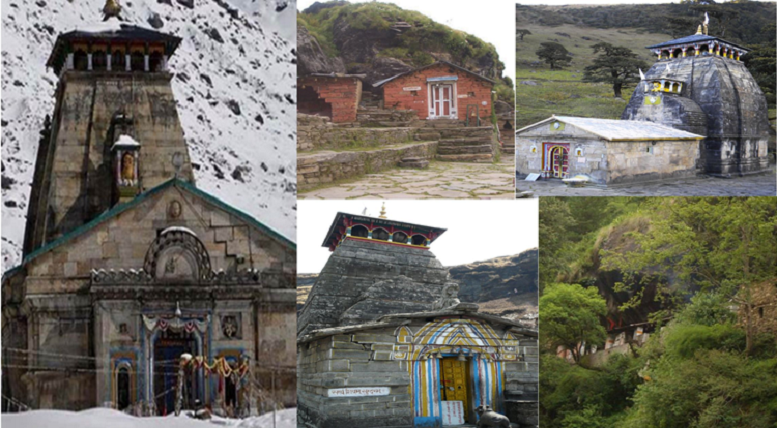 The dreaded and great Mahabharata war took place during the Dwapara Yuga between the Kauravas and Pandavas after the latter refused to return Indraprastha to the Pandavas. The war took place for 18 straight days which resulted in the victory of Dharma over Adharma. However, the enormous amount of bloodshed and sorrow witnessed made the Pandavas decide to atone for their sin of fratricide. After 36 years, they handed over the kingdom to Parikshit, Abhimanyu’s son and went to Kashi, the ageless city to seek the blessings of Bhagavan Shiva

However, Shiva was greatly angered and disgusted by the dishonesty that was prevalent throughout the war. Hence, he vanished from Kashi as soon as the Pandavas came there and taking the form of a well-built bull, hid in the Garhwal region.The Pandavas, not finding him in Kashi, came to the Himalayas.

Bhima spotted the bull grazing and caught hold of its tail. However,the bull escaped and started to run, with the Pandavas running behind it. The bull went underground, with five parts in five different places. The Pandavas built amazing temples at these five places and worshipped Shiva who forgave them for their sins.

Kedarnath, Tungnath, Rudranath, Kalpeshwar and Madhyamaheshwar are the five places where these temples are located in Uttarakhand, Bharata.

Kedarnath is the first temple out of these five,located at an altitude of 11,755 ft. It is also one of the 12 Jyotirlingas and one of the 275 Paadal Petra Sthalams glorified by the Nayanmars. The hump of the bull is worshipped here as a conical linga. Adi Shankaracharya restored this temple when he came here. He attained Mahasamadhi at this place.

The head priest (Raval) of the Kedarnath temple belongs to the Veerashaiva community from Karnataka. However, unlike in Badrinath temple, the Raval of Kedarnath temple does not perform the pujas. The pujas are carried out by Raval’s assistants on his instructions. The Raval moves with the deity to Ukhimath during the winter season.

There are five main priests for the temple, and they become head priests for one year by rotation. Surrounding Kedarnath, there are many symbols of the Pandavas. Raja Pandu died at Pandukeshwar. The tribal here perform a dance called “Pandava Lila”. The mountain top where the Pandavas went to Swarga, is known as “Swargarohini”, which is located off Badrinath.

When Yudhishtira, the eldest of the Pandavas, was leaving for heaven, one of his fingers fell on the earth. At that place, Yudhishtira installed a Shiva Linga, which is the size of the thumb. To gain Mashisharupa, Bhagwan Shiva and Bheema fought with maces. Bheema was struck with remorse. He started to massage Shiva’s body with ghee. In memory of this event, even today, this triangular Shiva lingam is massaged with ghee. Water and bilva-patra leaves are used for worship.

The temple has survived the 2013 flash floods due to a huge rock.

This is one of the highest Shiva temples in the world and the second of the Panch Kedar at an altitude of 12,070 feet at sea level in Rudraprayag district.The bahu or the arms of Shiva are worshipped here.

It is located at the top of the ridge dividing the waters of the Mandakini and Alaknanda rivers.

The priest at this temple is a local Brahmin from Makku village, unlike the other Kedar temples where the priests are from South Bharat, a tradition set by the eighth century Hindu seer Sankaracharya. It is also said that the Maithani Brahmins officiate as priests at this temple.

During the winter season, the temple is closed and the symbolic image of the deity and the temple priests are moved to Makkumath, which is 29km from here. It is near Duggalbitta 10 km (6 mi) before Chopta towards Ukhimath.

Previously, Sri Rama had meditated here at the Chandrashila peak to atone for his sin of Brahma-hatya as Ravana was a Brahmin.

Rudranath is located at 3,600 metres (11,800 ft) above sea level,this natural rock temple is situated within a dense forest of rhododendron dwarfs and Alpine pastures.

The face of Bhagwan Shiva is worshipped here.The archakas at this temple are Bhattas and Tiwaris from Gopeshwar. In winter, a symbolic image of Shiva is brought to Gopinath Mandir in Gopeshwar for worship. The Doli Yatra starts from Gopeshwar via Sagar. The Doli Yatris cross Lyuti Bugyal and Panar and finally reach Pitradhar. The worship of ancestors is done here.

Then, after crossing Dhalabni Maidan, the Doli or the symbolic image of Shiva, reaches Rudranath.Here first the Vandevi is worshipped. The local belief is that Vandevi protects the area. The Kheshtra is protected by Vandevi or Vandevatas. The temple celebrates an annual fair on the full moon day in the Hindu month of Sravan (July–August) that is mostly on the day of Rakshabandhan. The fair is attended mainly by locals.

This is the fourth of the Panch Kedar temples,located at an altitude of 11,450 ft. The navel of Shiva is worshipped here.

The temple in the North-Indian Himalayan style of architecture, is situated in a lush meadow, just below a high ridge. The older, so-called ‘Vriddh-Madmaheshwar’, temple is a tiny blackened shrine on the ridge, which looks straight up at the Chaukhamba Mountain peaks. In the current temple, a navel-shaped Shiva-lingam, made of black stone, is enshrined in the sanctum.

There are two other smaller shrines, one for Shiva’s consort Parvati and the other dedicated to Ardhanarishwara, a half-Shiva half-Parvati image. Bhima, the second Pandava brother is believed to have built this temple and worshipped Shiva here. To the right of the main temple there is a small temple where the image of Saraswati, the Hindu goddess of learning, made of marble is installed in the sanctum.

The water from the temple precincts is considered so highly sacred that even a few drops are stated to be adequate for ablution. The worship at this temple starts with a specified time period from the beginning of the summer months after the winter and lasts till October/November from the start of the winter season when the temple precincts are not accessible due to snow conditions.

During the winter period, the symbolic idol of the god is shifted with religious formalities to Ukhimath for continued worship. Priests at this temple, as in many other temples in the state, are from South Bharat and at this particular temple they are called Jangamas of the Lingayat caste who hail from Mysore in Karnataka state. This induction of priests from outside the state enhances the cultural communications from one part of the country to the other, with language becoming no barrier.

It is one of the important sacred pilgrimage centres of Shastric (textual) importance categorized as Panchasthali (five places) doctrine. This doctrine has been determined on the basis of sectarian association, fairs and festivals, offerings to the deity, sacred declarations made by devotees and specific blessings sought from the god through prayers at different temples. 2 km away is a small temple called Bura Madhyamaheshwar.

One has to trek 2 kilometers up the steep ways through large moors and valleys and then would reach in a small lake, where a full Panoramic range of Himalayas consisting of the peaks, Chaukhamba, Kedarnath, Neelkanth, Trishul, Kamet, Panchulli etc.

It is the fifth temple and the only temple which is accessible throughout the year.It is located at an altitude of 7,217 feet, lower than the first four temples. Here,the matted hair or Jata of Shiva is worshipped.

Particular mention is made of sage Arghya who through his austere penance created Urvashi, the famous apsara (nymph) at this place. Durvasa, an ancient sage, son of Atri and Anasuya, considered an incarnation of Shiva, known for his short temper did penance and meditated under the Kalpavriksha, the wish fulfilling divine tree in the precincts of the temple.

Further, it is said that Durvasa had given Kunti, mother of Pandavas, a boon that “she could invoke any of the forces of nature and they would appear before her and grant whatever she desired”. Once, when Pandavas were in exile here, in order to test them Durvasa visited them along with his disciples and desired to be dined by them.

Unfortunately, there was no food available within the house to feed the surprise guests. Draupadi, wife of Pandavas, sought Bhagwan Krishna’s help. Krishna materialised on the scene and solved the problem.

The temple priests at this temple also are the Dasnamis and Gossains.

The sky over Kedarnath appears to resonate with the name of Shiva.

Only Kalpeshwar is accessible throughout the year.

The water in Madhyamaheshwar is very sacred and even a few drops will give a person punya.