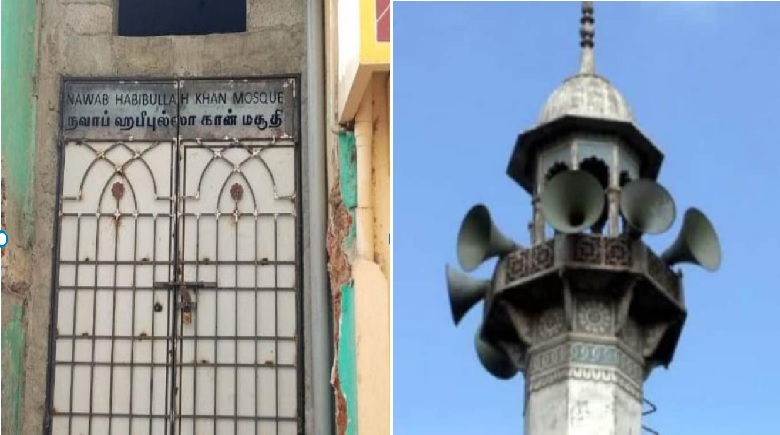 Tension continued to grip Sarkar Mandi street in Gandhi Road, Vellore and a heavy police posse has been deployed after the Hindu Munnai opposed the sudden appearance of a mosque in the area.

The Hindu Munnani workers alleged that the mosque was built without proper permission and that a house was converted into a mosque overnight. They claimed that the construction of mosque would lead to friction in future as there are three temples within a distance of 100m and temple processions are taken out through the area which might face opposition due to presence of this ‘mosque’, as Hindus have previously experienced in Perambalur.

Every year, there are reports from all over the country of stone pelting or violence when a Hindu religious procession passes in front of a mosque or through a Muslim-dominated area. The latest example of this was the brutal mob lynching of minor youth Rupesh Pandey in Jharkhand.

Police said that the building belonged to a trader and was recently renovated and a board reading ‘Mosque’ put up. The Hindu Munnani questioned how a religious structure could suddenly be built without due permissions and petitioned the district collector to prevent communal tensions in the area.

The 2400 sq.ft property reportedly belongs to a Muslim family which built a small tomb for their ancestors at the backside while a small juice shop was being run at the front of the house. Family used to do namaz at the personal tomb which Muslim groups now claim has been ‘functioning as a public mosque since 1896’. They claim that the family had ‘donated’ the property to Wakf Board.

Nevertheless, a place of worship cannot be built or converted without obtaining permission from district authorities, legal sources HinduPost spoke to said.

Hindu Munnani leader R. Maniswamy, while speaking to IANS, said: “We have already petitioned the District collector that commercial property is suddenly being converted into a mosque without proper documentation. Moreover, the mosque is coming up in a place where there are three temples within 100 m radius and our temple processions are taken out through this area and in future, this will lead to great friction.”

Vellore Superintendent of Police Rajesh Kannan, while speaking to IANS, said: “The place was used as a personal worship centre. Now they have put a board transforming it into a public worship centre. The Hindu Munnani is alleging that they do not have any proper papers for this and the revenue department is verifying the documents. Police are on vigil and will maintain law and order at any cost.”

Meanwhile, the Muslim groups met the district collector and submitted a memorandum stating that the ‘mosque’ was functioning at the place since 1896.

Dravida Muslim Munnetra Kazhagam (DMMK) leader G.S. Iqbal said: “We have petitioned the district collector stating that the mosque was in place since 1896 and that the Hindu outfit is unnecessarily creating an issue. The District collector and the RDO have gone through our petition and we expect a verdict in our favour before Friday. “

As is their wont, English language media has brushed aside the valid Hindu concerns in this matter while reporting the issue:

Reportedly, certain Muslim groups would resort to ‘protest marches’ after the Friday Namaz if the issue is not resolved till then. Having seen how the ‘protests’ over the hijab demand quickly deteriorated into naked violence, TN Police should take this threat very seriously.