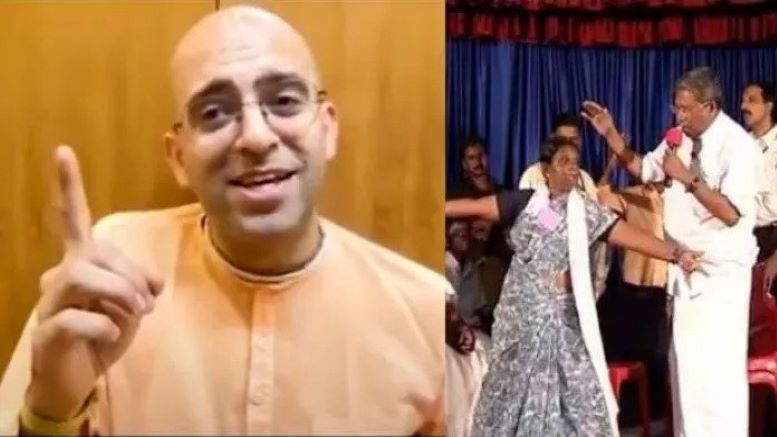 A video of ISKCON Delhi Dwarka’s VP Amogh Lila Das hilariously mocking allurement tactics employed by Christian evangelists to lure and convert poor people is sure to set one laughing. The said video has been posted on YouTube by CITTI MEDIA. Das also highlights other tactics employed by the missionaries whom he describes as exclusivists, unlike Hindus who are inclusive in their approach.

He enacted the manner in which missionaries dramatically make ‘patients’ drink a ‘magic potion blessed by Christ’ following which the person recovers and starts dancing. The missionary then says “just see the magic of Jesus Christ” noted Das. Those who have seen missionary videos claiming magical cures would know that such scenes are common in evangelical conclaves across the country.

Elaborating on the tactics further and subsequently highlighting the work of ISKCON, Das said “They (missionaries) take miracles and dramatize them to the next level. They do this so that the people come to Christianity. After this, they also give some kind of materialistic provisions like hospital treatment, a job, or some five thousand rupees in case one gets converted, and all such cheap methods to convert people. But we focus on spiritual education. We don’t force people and use such cheap tactics to convert people to Sanatana Dharma. We inspire them, educate them and we have answers to all their questions”.

“I heard a missionary once saying anyone and everything apart from Jesus Christ comes from the Devil which includes those Hare Krishnas who have answers to all the questions. He was actually appreciating us”, Das opined. He also said that ISKCON monks never say such things because they follow an inclusivist policy while evangelists use the “my way or highway” strategy.

As per available information, missionaries have converted about 1 lakh people in 2021 alone taking advantage of the pandemic, and have claimed to have successfully planted more churches in Bharat than they have over their 25 years of work in the country. From indoctrination to cultural appropriation, the conversion issue runs so deep, that many states have now begun to implement anti-conversion laws.