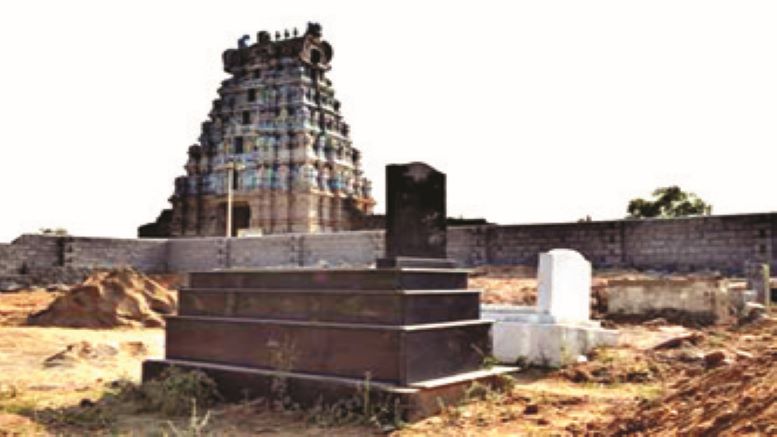 IMK (Indu Makkal Katchi) members were booked under NSA (National Security Act) for allegedly demolishing a cemetery constructed illegally by the Sacred Heart Church right in front of the Manimoortheeswaram Uchishta Ganapathy Temple near Tirunelveli. The incident is said to have occurred on the night of October 17.

As per reports, the cemetery built over an area of two acres had encroached upon temple land and the Sacred Heart Church had illegally claimed ownership of the land. Despite objection from locals and devotees right at the start, the construction was allowed to go on.

In this regard, complaints to police about the illegal construction were also supposedly overlooked as highlighted by LRO (Legal Rights Observatory), an NGO fighting to secure the legal rights of indigenous people. LRO  had brought the illegal encroachment to the notice of the Tirunelveli District Collector (DC) and requested the removal of the cemetery as early as November 2019.

LRO has lodged complaint to Tamilnadu's Tirunelveli DC requesting removal of encroachment of Christian cemetery illegally started at very near to the Gopuram of ancient Manimoortheeswaram Uchishta Ganapathy Temple. It is heinous attempt to usurp temple land in future @arunv2808 pic.twitter.com/XwHyVIL8Fh

The district administration had responded to the LRO  complaint saying that the cemetery was situated on private land and that they had imposed section 145 so as to ensure that burial rituals were not carried out keeping in view the objections raised by temple devotees and the local populace.

Despite this assurance by the administration, burials were said to be carried out unabated and about 50 graves have already been carried out on the said piece of land. Appeals of Hindu organizations and locals to various authorities including the HR&CE (Hindu Religious and Charitable Endowments) department along with the local administration fell on deaf ears.

Following this, cadres of IMK are believed to have allegedly demolished the graves on the night of 17th October. The Thachanallur Police Station was informed about the damage on 18th October by people who happened to pass by the cemetery.

IMK chief Shri Arjun Sampath had issued a statement to The Commune Mag in this regard saying “We have been asking for the removal of that cemetery for a long time. Our requests and pleas had fallen on deaf ears of the Tamil Nadu HR&CE department. They have not even cared to protect the temple of which they are a custodian. Since there was no action despite repeated requests, our cadres took the matter into the hands. The persons responsible would be surrendering soon”.

Reports state that a case has been registered by the Thachanallur Police on ten members of the party under the NSA and other Acts including 147 (rioting), 148 (rioting with deadly weapon), 297 (trespassing), 427 (mischief causing damage), 294(b) (reciting obscenities in a public place), 353(A) (assault or use of criminal force to deter public servant) and 506(ii) (criminal intimidation) of the Indian Penal Code (IPC).

Eight IMK members have been arrested while one has already secured anticipatory bail. Reports state that search of one more member named by the police is ongoing. IMK district secretary Udaiyar, Muruganandam, Shankar, Sabari Rajan, Ayyappan, Chairmandurai Kandhan, RadhaKrishnan, and Subramanian have been remanded to judicial custody and lodged in the Nanguneri sub-jail.

It must be mentioned here that the arrests were in response to the pressure exerted by the Catholic church which held protests and claimed that communal harmony was under threat. Tirunelveli City Police Commissioner Deepak M Damoor is said to have passed orders to slap the NSA on those who had been held on the basis of Deputy Commissioner (law and order) S Saravanan’s recommendations.

However, LRO has sought legal action against Damoor and Saravanan under various sections of the Police Act for dereliction of duty. In the notice, LRO has brought to light how the police officials have not only failed to act on the illegal encroachment by the Church based on the complaints of the devotees but also misused provisions of the NSA against IMK members.

It has also been alleged that not only did the police fail to act against the encroachers but even supposedly aided those who were illegally occupying the temple land. Calling the application of NSA both illegal and unlawful, the notice has also pointed out that the police officials had allowed the encroacher (Sacred Heart Church) to play the victim card and derail the process of law thereby violating the law of natural justice.

This case shows the clout that the catholic church has where it is able to get Hindu devotees booked under the NSA despite the former being the aggressors and the latter the victims and at the same time escape legal action even though the church has illegally occupied the temple land.