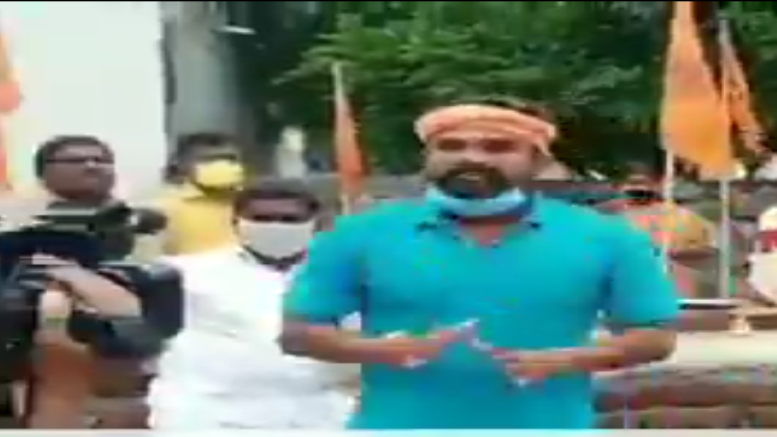 Missionary attacks on Hindus, particularly their places of worship, have been increasing. Another important fact attested to by Hindu Munnani’s (Hindu Front) twitter timeline shows that evangelical prayer houses have been popping up unrestrained in Tamil Nadu. A Christian missionary trust founded by noted German missionary Hans Roever has earned the ire of local Hindus in Perambalur as it is trying to usurp the small plot of a Ganesha temple.

The video of an activist politician Sathya Prabhu Selvaraj questioning the government’s inaction in protecting the temples and treating Hindus as second class citizens has gone viral on social media (SM). Roever group of institutions which is involved in this issue, dominates a major part of Perambalur, a backward district of TN.

Since 1978, Dr. K. Varadharaajen who claims to be the disciple of Hans Roever has been the trustee and chairman of the trust. As per information available on their website, in addition to the 22 educational institutions, they also own 16 ‘orphanages, centers for physically and visually challenged, centers for the aged and homeless, HIV / AIDS counseling center, short stay home for women and girls’.

Coming back to the issue, a temple for Ganesha was built allegedly in the poramboke (unassessed government land reserved for public use) land of a residential area where 100 to 200 families live. It was built to provide easy access to the women, children, and the elderly for whom it was difficult to cross the busy road to go to the nearest temple.

One of the schools run by the Roever group of institutions borders the temple land. The compound walls of the school can be seen in the video. It must have been an eyesore for the missionaries for even though the school is said to have 4 entrances, the school management is trying to build a new entrance exactly opposite to the Vinayaka murti which will become an obstacle on the path if the entrance is constructed.

This is the kind of mindset required for each & every TN youth
200 families together financed & built a small Sri Ganesha temple in their area & has been praying for yrs
But a Missionery school next to the ground has earmarked some parts for expansion of their school pic.twitter.com/dFZ2wClQup

Activist politician Sathya Prabhu Selvaraj says that it is part of the residential plots (probably the plot reserved for community use) and thus the Hindus have right over it. He raises pertinent questions as to why the welfare of Hindus is not thought of while a missionary from Germany can proselytize and build institutions in Bharat. He expresses his emotion and bhakti saying, “Even if a single brick of this temple is removed we will consider it as our limbs being removed. PM Narendra Modi Ji and HM Amit Shah Ji should make sure that no matter what this issue is solved”.

Going by its declared statistics, St.John Sangam Trust doesn’t appear to receive much funds from abroad. But it has received ₹ 1,65,000 from the TN Department of Social Welfare in 2018-19. One of the homes run by the trust was featured in the media when two girls housed there escaped in the middle of the night. The girls were put there after the department of Social Welfare and Child Welfare Committee rescued them from underage marriage. But the girls were reportedly pursuing their first year of college which hints they weren’t underage.

It is important to note here that most of the orphanages, homes, and shelters in TN are run by Christians. The social welfare department also overwhelmingly comprises of Christians. Majority of the child welfare workers are also Christians. Now, the so-called short stay home mentioned here is run by a trust that openly declares itself to be a Christian missionary organization headed by the disciple of a missionary worker.

What is the necessity of mentioning a detail which is not at all connected to the temple issue? The necessity is to understand how the legal framework favors minorities and treats Hindus as second class citizens.

As minority institutions, both the school in this particular case and the church which they’d most definitely have inside their campus, and the social institutions run by the trust receive patronage from the government. The school would be eligible to get a fund of 75% of the total expenditure and subject to a maximum of Rs. 50 lakhs for the strengthening of educational infrastructure and physical facilities in the existing school including additional classrooms, science/computer lab rooms, library rooms, toilets, drinking water facilities, and hostel buildings for children under the scheme for Infrastructure Development in Minority Institutes (IDMI).

The orphanages receive funds from the state social welfare department. The church, that the activist claims to be present, can avail the grant-in-aid provided by the minority welfare department to renovate and repair churches amounting to a maximum of ₹ 3 lakhs. Even with all this, the missionaries are not satisfied and want to remove the small Vinayaka murti.

Knowingly or unknowingly, Sathya Prabhu Selvaraj touched this raw nerve when he asked “If a man from Germany can build a school, college, church here, can’t the sons of the soil born in Bharat keep a murti of Vinayaka? Is secularism only for us Hindus? Can’t they practice the same secularism?”.

Temples which used to be the center of Hindu lifestyle in yore, are now mere commercial complexes for the secular government to milk the Hindus of their wealth. Bharat needs many more voices like Sathya to regain its past glory.