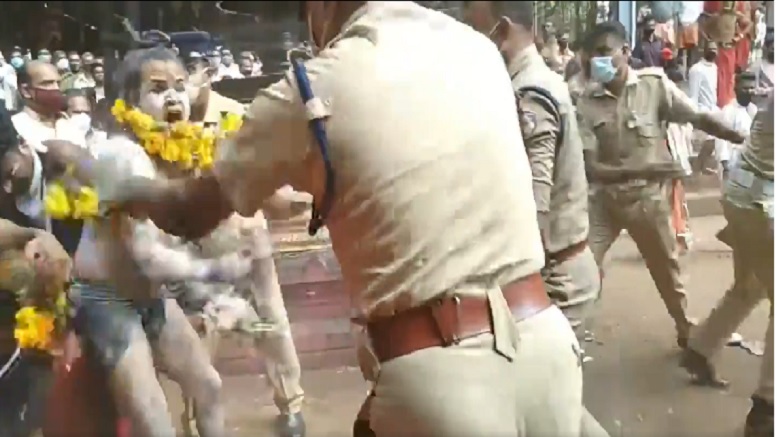 As part of the Meena Bharani festival, Hindu oracles performed Kozhikallu Moodal, an ancient ritual of animal sacrifice and blood offering at the Sree Kurumba Bhagavathi temple near Kodungallur in the Trichur district of Kerala. Shocking video footage shows police trying to drag the oracles and Hindu devotees away while they were performing the rites. Police deployed inside the temple has reportedly arrested nine persons in this connection.

That the resistance had begun was evident earlier too when a group of oracles and devotees entered the temple and performed the ritual dance called Thullal. The District Collector, S Shanavas IAS, had ordered police to stop festival celebrations this year, overruling town council officials and elected representatives.

Why would anyone object to such a symbolic sacrifice, while turning a blind eye to the mass sacrificial slaughter which takes place in our streets during Bakr-Eid and encouraging the mass killing and consumption of an animal that is sacred to Hindus?

Such ancient rituals had been banned ever since ‘reformist’ communists had come to power in Kerala, even when birds and other animals are killed and sold on the main roads in the state by the seculars. This includes beef and all sorts of animals that are killed indiscriminately and inhumanely. The whole meat industry is controlled by the Halal mafia that involves only a particular community and economically discriminates against others. Why doesn’t the secular government voice its concerns over beef festivals, if it considers animal sacrifice in Hindu temples ‘cruel and regressive’? Hindus believe that the sin of killing comes undone when one consumes that meat.

Time and again we have seen Covid-19 or other reasons being used to restrict Hindu festivals and rituals and delay opening of temples. But when it comes to festivals of other communities, or protests and election rallies, the same rulebook is nowhere to be seen, and respectful consultations are held with religious leaders of those communities.

The local administration has virtually made Kodungallur a no-go zone and has failed miserably in the eyes of Hindu devotees. The devotees led by Chandala Baba Malavari, a young local saint, and his disciples entered the temple yesterday morning around 11. There was a heavy police presence and they pounced on the devotees as soon as they took out the birds for the ritual sacrifice. The video available online clearly shows brutality of police and the crude manner in which Hindu rituals are desecrated.

Left-leaning media reported glaring lies that the devotees tried to ‘run away‘ but the video evidence clearly shows no such attempts to flee. Their reporting felt more like a communist party office diktat more than unbiased reporting. They also reported that Kodungallur Assistant Sub-Inspector Roy Abraham was injured in the incident. Media reports added that following this incident, surveillance was expanded near the temple. Why do we need boots inside our temples is a matter that needs to be deeply retrospected, urgently.

Would the police dare do the same if someone was doing his namaaz on the main road by blocking traffic? Instead of clearing the road, the police in our ‘secular’ country arrests the people who take photos of such namaz being offered!

The authorities comfortably forget that millions of domesticated animals are slaughtered in the most inhumane manner of slitting the throat and waiting for it to bleed to death i.e. halal, on a daily basis. Such acts should be the real focus of the government rather than run-around and beat up devotees who sacrifice an animal or two to gain the blessing of their Gods or Goddesses. The cruel scenes that emerge from all over the world during Eid where animals are butchered out in the open should be the real focus of any non-partisan government. And the suffering that animals are put through in modern meat farms.

Cries for handing over temples to local devotees have been steadily rising, and with neither central nor state governments ready to heed to this just demand more such resistance can be expected. The government has no business to interfere with Hindu temples should be the new mantra. Hindu patience, immense like the ocean, is wearing thin.