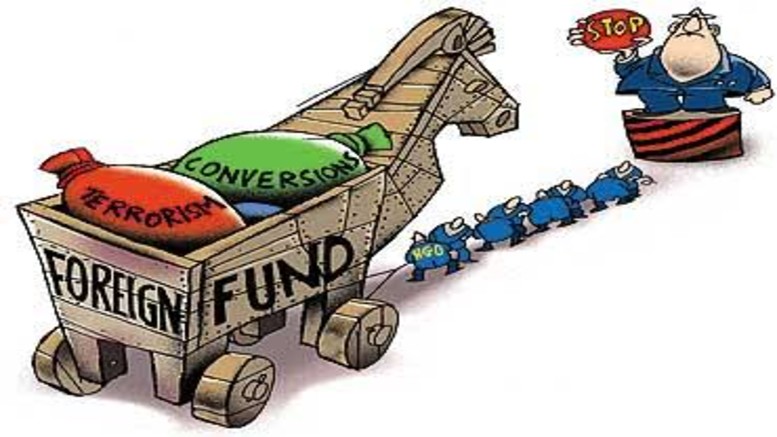 The FCRA licence of 6 Christian and Islamic NGOs have been suspended by the Home Ministry recently. These organisations were involved in conversion, sexual abuse of children, misappropriation of funds and violated many rules of the Foreign Contribution Regulations Act, 2010.

Holy Spirit Ministries located in Bengaluru was receiving funds from the Limited Liability Companies of KP.Yohannan’s FCRA behemoth Gospel For Asia- USA. Since 4 of GFA’s Bharatiya subsidiary NGOs’ registrations were cancelled in 2017, Holy Spirit Ministries started receiving foreign funds through its LLCs. The evangelist organisation’s licence has been suspended now.

Heavenly Grace Ministries, another evangelist NGO, based out of Orissa, run by one Shibu Masih was also being funded by GFA’s LLCs located in Canada. Peoples Organisation For Empowerment Of Tribals (POET), another NGO based in Orissa, that claims to work in the fields of education, health, poverty and everything under the sun, also receives funds from GFA’s LLCs in the US. ‘Teaching Skills’, an LLC of GFA World, used to send funds to Believers Church India till 2017, when BCI’s FCRA registration was cancelled. Both Heavenly Grace Ministries and POET’s licenses have been suspended for 180 days.

Russ Foundation which operated in Tamil Nadu, had its license suspended following the arrest of Berlin Jose, director of the NGO. Jose and another employee were arrested for sexually abusing a 10 year old child. They ran separate orphanages for girls and boys along with primary, nursery schools and a hospice in Madurai. They were sealed after sexual abuse charges came to light. Police had slapped Goondas act on the perpetrators which was opposed by many FCRA NGOs including Henry Tiphagne’s Centre for Social Studies aka People’s Watch. Later, the Madurai bench of Madras High Court granted bail to both of the perpetrators.

Markazul Ighasathil Kairiyathil Hindiyya, a Kerala based Islamic NGO’s license has been suspended after the MHA found that the organisation didn’t file proper returns for Rs.50 lakh drawn from its FCRA account. The Print reported MHA sources as saying that the amount was withdrawn to buy a piece of land but the deal was cancelled. Instead of returning the amount the NGO had kept it in its office and didn’t file documents for its expenditure.

The NGO, otherwise known as Relief and Charitable Foundation of India(RCFI) is linked to Sheikh Abubakr Ahmed, referred to as ‘Grand Mufti of India’ by his followers. Ahmed’s son is the General Secretary of the NGO. Ahmed is the Chancellor of the Jamia Markaz, Chairman of the Siraj Daily and General Secretary of the All India Sunni Jamiyyathul Ulama. The organisation had received Rs.70 crore in 2018-19 alone and hadn’t filed the returns for 2019-20 financial year. In the last 3 years it had received Rs.146 crore, mainly from gulf countries and Turkey

Both Mewat Trust for Educational Welfare(MTEW) and Al Hasan Educational and Welfare Foundation(AHEWF) associated with Mohammad Umar Gautam, who converted thousands of disabled Hindus, had their licenses suspended for violating multiple FCRA rules. Umar Gautam is the Trustee of MTEW and Vice President of AHEWF. The suspected terror link of Umar Gautam and the organisations he is associated with are being probed by UP ATS.

Apart from these NGOs involved in religious conversion, 2 other NGOs working in the field of environment and human rights also had their license suspended recently. One of them, Commonwealth Human Rights Initiative (CHRI) which had been advocating for police reforms, received funds from George Soros’ Open Source Foundation earlier. As OSF was put on a prior permission list by the Bharatiya government, it started conduiting money to CHRI-India through CHRI-UK.

All the NGOs’ licenses stand suspended for 180 days. They can appeal against it in the meantime by filing proper documents demanded by the MHA. Until then they’ll be restricted from using the funds in their FCRA bank accounts as they are freezed for the time being. CHRI went to court against its suspension and got leeway to access 25% of its funds to pay the employees.