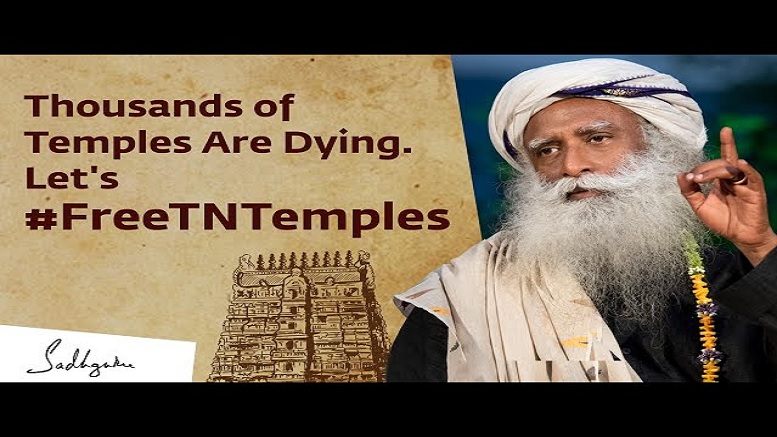 Temples, once the soul of Bharatiya culture, with civilizations evolving around them have been the learning centres and the nucleus of Bharatiya lifestyle. But now they lie in neglect shackled by government administration. Once a thriving centre of economy as well, providing livelihood to many sections of the society, temples are now not even able to run their own administration while other Indic religions and the Abrahamic ones have autonomy over the management of their places of worship.

Many have been voicing out about this on social media and demanding that temples be released from the control of the state. However hardly anyone with an institutional background in the field of spirituality came forward to make this demand. Chilkur Balaji temple head priest Rangarajan has been repeatedly speaking about how the government control over the temples shackles them and how it is against the rights guaranteed in the constitution. However his voice hasn’t reached widely except for social media.

But Tamil Nadu with its background of Dravidian politics that first introduced temple control through which governments enjoys the power of handling devotee offerings and temple properties has sprung up a surprise recently. Sadhguru Jaggi Vasudev, the founder of Isha Yoga, has started a campaign to free temples in Tamil Nadu. He has taken it upon himself to tweet about it everyday from his Twitter account as a request to the politicians of TN. He has also implored them to include this request in their poll promises.

I have requested the TN CM & Opposition Leader to declare their intent with regard to freeing Temples in state control. We cannot preside over decades of neglect & apathy. Amounts to spiritual suicide for Community. –Sg #FreeTNTemples @CMOTamilNadu @EPSTamilNadu @mkstalin pic.twitter.com/NSn7moAJef

He had sent a letter to both Edappadi Palanisamy, the CM and the Opposition leader M.K. Stalin highlighting the apathy shown towards the management of temples. He has remarked how 11,999 temples in TN which are under the control of HR&CE department don’t even have the revenue to take care of one time puja (puja needs to be done 3 times a day) and how in some temples only one person is appointed to manage the affairs of the whole temple. “34,093 temples are struggling to meet ends with less than Rs 10,000 as annual income and of the 44,121 temples under HR&CE control in Tamil Nadu, more than 37,000 do not get enough revenue to appoint more than one person, who has to carry out all tasks including priestly and caretaker duties” he says in his letter.

He has explained that if these temples were released from government control and managed by the local community how they can be lively, reverberating with bhakthi and become self-reliant. Sadhguru has been tweeting everyday bringing alarming details of neglect in which even the historic temples lie and gathering support for his campaign by highlighting the same. He has pointed out that being seular the government cannot manage temples and that they must declare themselves as theocratic if they want to continue controlling temples.

He has also pointed out how everything Tamil is about temples. From the state emblem to the culture and the very heart of it, are temples, he tweeted. Apart from not managing the temples properly, HRCE has also neglected the properties of the temples whether it be the murtis of deities or land. A HRCE audit has revealed that in the last 25 years 1200 murtis have been stolen from TN temples alone. Likewise from continuous PILs filed in the courts it has come to fore that 50,000 acres of land out of 5.25 lakh acres belonging to the temples are still encroached. But even this statistic is allegedly wrong as the documents of many temple properties have gone missing and deliberately destroyed in many cases.

Sadhguru is bringing these details to the attention of a wider audience and calls upon them to save our temples that are “an outpouring of devotion, as are literature, art, music, and dance”. “If we allow temples to fall apart, we will allow the basis of the Tamil culture to decay” he warned. It is a well known fact that many of the devotionally sculpted murtis and murals are going waste due to the uncaring attitude of the HRCE department during renovation work as the contract for it is awarded to the lowest bidders. It is important to preserve such treasure as the artists who can create them are either no longer available or are very few in number.

Sadhguru expresses concern about these issues and says that the temples should be cared for by devotees who would give their life to protect them. He warns that TN, now known as the Land of Temples worldwide, will soon be known as the Land of Dead Temples if we don’t act soon. He feels that it is insulting to imply that in the 87% population of Hindus, a handful of people with the integrity and competence to manage temples can’t be found. It is painful enough that our deities are stolen and smuggled to sit as a piece of art and take the place of pride in the houses of those who have no devotion for them.

It is downright agony to see the ancient places of worship that once brimmed with life being treated as a monument and exhibited for tourists by the ASI. So Sadhguru has called for the political class of the nation to commit to handing over temples to the Hindu community. Even though he thanked DMK chief MK. Stalin who is also the CM face for the upcoming assembly elections, he has also taken a dig at his promise that he’ll give Rs. 25,000 for Hindu pilgrims tweeting that “The Hindu community does not need pittance as charity for pilgrimage” and that “Not money, but restoring the glory of the temples” is what the Hindu samaj needs.

However, as always, the followers of the Dravidian Movement have recognised this as a threat to their ideological hegemony as liberating temples would result in the creation of space in educational and cultural fields which is now dominated by the church and its assorted organisations. Some even called for Isha Yoga center to be taken over by HRCE once DMK comes to power.

Even though it has come as a surprise to many Hindus that such a powerful voice could rise from Tamil Nadu of all places, many are extending their support to this campaign. Sadhguru launched a missed call campaign for the Free TN Temples initiatives on the day of Maha Shivaratri and thousands of Hindus gathered at Isha Yoga centre in Coimbatore showing their support to the initiative by holding placards. With someone openly calling the political class to take a stand on the most sensitive issue of the Hindu community, many expect it to be the beginning of a revolution.