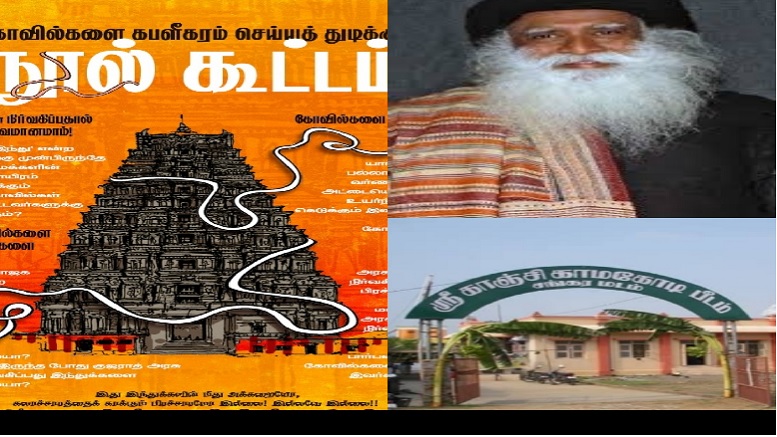 Even though activists like T. Ramesh and organisations like the Indic Collective have been leading the legal fight to reclaim the rights of Hindus in managing temples in Tamil Nadu, it took a public figure like Sadhguru Jaggi Vasudev to bring to attention the pathetic condition of temples under the control of TNHRCE (Tamil Nadu Hindu Religious and Charitable Endowments). However, DMK and certain politicians of the party who have enjoyed the privilege of controlling the temple economy handed down through generations became averse to this as it could mean the end of their privilege.

DMK which openly mocks Hindu beliefs and its leaders who express inherent hate for Sanatana Dharma will never let temples out of their control, and Jaggi’s campaign to free TN temples and the support it received has shaken them to the core. But with DMK being predicted to sweep the 2021 assembly elections their leaders have started behaving like they’re already in power and started threatening and derogating Jaggi. In the process they are calling him a ‘stooge of RSS and Brahmins’ and DMK’s IT wing secretary, PTR. Palanivel Thiagarajan initiated a campaign against Jaggi calling him a ‘jackal’.

But that wasn’t all and his actual target was the Brahmin community. The posters posted by him had an image of Janeu (sacred thread) encircling a temple tower like a snake. It needs to be reminded here that EV. Ramasamy aka ‘Periyar’ infamously told that if one sees a snake and a Brahmin together, one must kill the Brahmin first.  The poster shows that the hatred seems to have been nurtured by the consequent generations of Dravidianists as well. But this is not it either. DMK supporters started demanding that the DMK, once it comes to power, should take over Isha Yoga Foundation established by Jaggi on the pretext that it encroaches the elephant corridor.

While this was dismissed as mere daydreaming by many, DMK has propped up its front Deiva Tamil Peravai, spiritual wing of Tamil Desiya Periyakkam, a Tamil nationalist organisation. This organisation has dubious people as its members, Kalaiarasi Natarajan one of them, who said in a Christmas celebratory event that hearing the word ‘Hindu’ disgusts her and makes her feel like she is on fire. They have now come forward to demand that Isha Yoga centre be taken over by the HRCE.

They showed their anti-Hindu hatred turned anti-Brahmin hatred by asking for the take over of Kanchi Sankara matha (mutt) as well because Kanchi Shankaracharya Shri Jayendra Saraswati Swami extended his support to Jaggi’s Free TN temples campaign. One may think what a fringe organization or some enthusiastic online supporters can do. But it doesn’t stop at that either. A candidate of Viduthalai Chiruthaigal Katchi (VCK), an ally of DMK, said in an interview that Jaggi’s intention is to give the temple management to pappans (slur word for Brahmins).

He says that his demand is for Jaggi’s organisation to be taken over by the government and that when DMK comes to power and he enters the assembly as an MLA, he will pressurise the government to take over Jaggi’s organisation. He says that Jaggi Vasudev should be arrested at least under the Goondas Act because there are ‘many cases on him’ and ‘his campaign is against the concept of social justice to scheduled castes and backward castes’. Next, he goes on to say that the remaining places (Hindu temples and institutions) like the Kanchi Sankara mutt should also be brought under the control of TN HRCE.

But Jaggi has actually been propagating that anyone with devotion should be trained to become priests and advocating for doing away with the traditional management system of temples. He even made  disparaging comments about Brahmins similar to DMK and DK calling them ‘exploitative, corrupt’, etc. and said that ‘Brahmins were the ones who brought the discriminatory process of the caste system’. He also said that Brahmin priests should be replaced with anyone from other castes regardless of the agama shastras and other set of specific rules traditionally followed by individual temples.

However, the Free TN Temples campaign is too important to be marred by such thoughts and Sadhguru Jaggi, as a public figure has played a role in taking it to the masses. Whatever faults there may be in his teachings must be dealt with internally among Hindus. But it would not be wrong to say that Kanchi Sankara matha has invited the ire of the Dravidianists by openly extending its support to the movement, and the threat of being taken over by the probable upcoming DMK government is all too real.

In 2006, when DMK came to power defeating the incumbent Jayalalitha led AIADMK government, the first thing CM Karunanidhi did was to shut down the rejuvenation camp for temple elephants which was introduced by Jayalalitha. If they couldn’t tolerate such a small matter, what they could do to those who are trying to disintegrate their narrative built over decades through the Free Temples movement is anyone’s imagination.