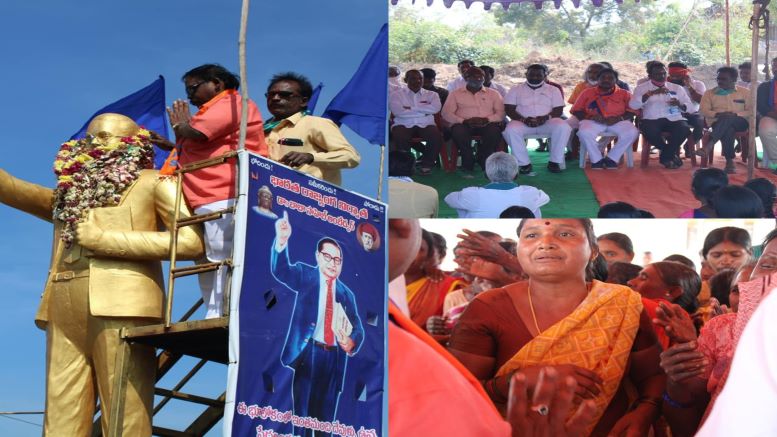 Christian evangelism has been wreaking havoc on Bharat and Hindu culture using the ‘divide & rule’ policy. The Telugu-speaking states of Andhra Pradesh (AP) and Telangana in particular have seen increasing instances of Christian aggression.

It has now come to light that innocent OBCs (Other Backward Castes) of Sangem Srirampur Village in Telangana’s Jagtial have been caught in the crossfire between SCs (Scheduled Castes) and Dalit Christian converts. 18 people belonging to the OBC community have been arrested under the Atrocity Act for the customary Mahisasur Dahan on Dussehra.

In December, Dalits from Sangem Srirampur Village demanded action against the Village Development Committee (VDC) members under the SC/ST Atrocity Act stating that they had been ostracized for obstructing Dussehra celebrations.

News reports stated that a controversy erupted over Mahisasur Dahan during the annual Dussehra celebrations in the village on 25th October as few Dalit youths had raised objections regarding the Dahan taking place near the statue of Ambedkar. However, they claimed that the VDC ostracized them for raising objections.

The Dalit families also said that the VDC imposed a fine of INR 10000 and for the past couple of months not even essential services were allowed into their colony. Additionally, the group demanded that VDC members be booked under the Atrocity Act.

After their complaint & media coverage, Dalit organizations & political parties milked the situation and conducted the Chalo Sangem Srirampur Program demanding ‘justice’ for the ‘ostracized’ Dalit families. Following the protests, 18 members belonging to the OBC community were booked under the draconian Atrocity Act & taken into custody in December 2020.

National Scheduled Caste Rights Protection Samithi (NSCRPS) in January 2021 to get to the depth of the issue. It was then that the entire picture emerged and the hand of Christian evangelists in manufacturing the ostracization story to widen the rift emerged. On reaching the village, NSCRPS spoke to villagers from several communities.

Shri Sayanna who belongs to the SC community testified to the fact-finding committee and stated that there is no ex-communication of any community in the village. He added that vested interests are playing havoc with the village’s harmony by using Christian converts to foist false cases on OBCs.

Mahisasur is dalit god – This narrative finds its devastating impact on 18 innocent OBCs who were arrested under SC atrocity act in a dispute over burning of Mahisasura on Dasera.
War on Hindu civilisation is on, be aware of it.
Sangem Srirampur, Jagtial, Telangana. pic.twitter.com/L8nYkUEk8L

In the above video, an OBC lady whose family have been arrested under the Atrocity Act narrated her ordeal. She said that her family members have been taken into custody for no fault of theirs. On the day of Dussehra, they burst crackers as is customary every year during Devi Durga Puja. They have been arrested for this act of bursting crackers and it is already 10-12 days since their arrest.

There are small kids in our family who are waiting for their father. We are going to terrible agony and pain she said breaking into tears. They should tell us what is our fault before arresting our family members.

The NSCRPS fact-finding committee learned several other shocking details regarding Christians targeting these innocent OBCs as well as Hindu SCs for political reasons. The NSCRPS report states that Dalits and OBCs have been living together for the last 50 years exceptionally cohesively. However, trouble began after 12 families converted to Christianity and have been attempting to target Hindu OBCs as well those Hindu SCs who are against extending reservation benefits to Christian converts.

They have been using several tactics to target Hindus at the behest of Christian evangelists and the Mahisasur Dahan episode is the latest one. NSCRPS National President Maredu Mohan who was part of the fact-finding committee has condemned the attempts of Christian converts harboring a grudge against Hindu Dalit Sarpanch for using the Atrocity Act to target innocent Hindus.

Shri Mohan said that their fact-finding committee found that people of all castes have been living peacefully in the village for a long time now. Trouble only began after a few families converted to Christianity a few years ago. This group of Christian converts is intentionally attempting to create tensions during Hindu festivals.

Both Hindu Dalits and OBCs then came together asking the Christian converts to stop causing mischief during Hindu festivals. However, all their plea seems to have fallen on deaf ears. Furthermore, NSCRPS has also learned that Christians are trying to use atheism and Ambedkarism as a tool against Hindus.

While Dalit groups raised objections regarding celebrations of Dussehra near the statue of Ambedkar, NSCRPS has uncovered the fact that Telangana government-sponsored Christmas celebrations also took place at the very same spot to which these organizations did not object. NSCRPS has raised questions regarding the nexus between certain Dalit and Christian organizations.

NSRCPS fact-finding committee’s visit to Sangem Srirampur village has brought to light the conspiracy by Christian evangelist groups, supported by Communists, that is using both SC Christian converts and certain left-leaning Dalit organizations to cause a rift between various communities in the village.