Harsh Goenka, Chairman of RPG Group, displayed his Hindumisia (Hindudvesh) yet again when he put out a now-deleted tweet mocking Hindu Dharma and its traditions using the ongoing Kumbh Mela. Goenka’s tweet carried pictures of Sadhus in loin clothes on the occasion of the holy bath and read “Meanwhile at the #KumbhMela the international press is appalled at how low we wear our masks.” A common Hindu should certainly be offended at the manner in which those holding high positions such as Goenka don’t bat an eyelid before making such crass comments. It did draw the ire of several Twitteratti who trended #BoycottCeat to register their disagreement with RPG Group Chairman Goenka.

Among those who registered their protest was TV Mohandas Pai, Padma Shri Awardee and current Chairman of Manipal Global Education, who tweeted saying “Idiotic comment by @hvgoenka pl learn to respect people and their traditions or just shut up! Such cheap comments do you no good just shows up what you are! These people keep our traditions and culture alive not people like you who kowtow to foreigners!“

Even BJP leader Tarun Vijay was quick to point out that people like Goenka had become colonial slaves despite the fact that his ancestors respected Dharmic Sadhus and built temples and dharmshalas. He also opined that it was possibly money and western education that has turned him (and people like him) into foreigners in swadesh.

Even author Sandeep Balakrishna who wrote about the Sanyasi Freedom Movement retorted to Goenka’s tweet saying “And we wonder why these Sadhus & Sanyasis fought and died when we see such sick minds today. But for their sacrifices, this guy’s name would be some Hidatullah or Henry.“

Goenka used an 8-year-old picture of the 2013 Prayag Kumbh Mela to target and malign Hindus and Hindu Dharma. The picture has been sourced from an article by Jay Tindall. Displaying Congress’ Hindumisia yet again was Congress leader Udit Raj who gleefully jumped at the opportunity to malign Hindu Dharma as is the wont with Congress.

His sarcastic tweet in Hindi drew false equivalence between the Tablighi Jamaat gathering and Kumbh Mela. Raj said that “Tablighi Jamaat was carrying out Corona Jihad in the country and lakhs of sadhus have now gathered at the Kumbh to fight against Corona & Jihad.” Hindupost has already pointed out why the two events cannot be compared. 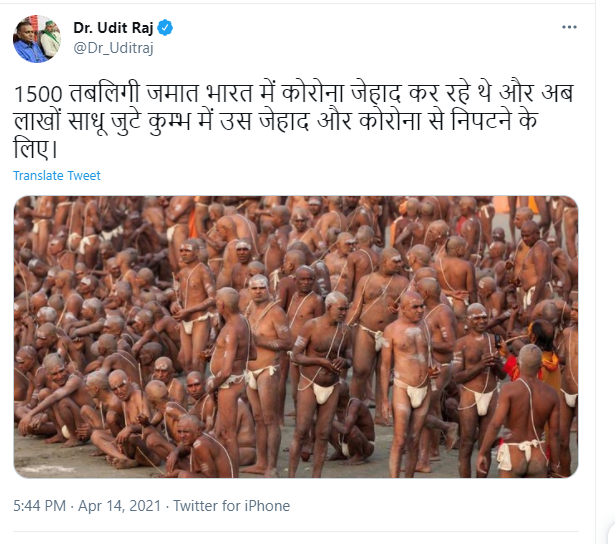 It isn’t surprising that Congress leaders time and again insult Hindu Dharma despite the shallow show of temple run by Rahul Gandhi and his sister Priyanka Vadra during election time to capture Hindu votes. Hindumisia runs deep in the Congress as it does in Harsh Goenka.

This isn’t the first time Goenka has resorted to such Hindumisic tweets. Earlier, on the occasion of Mahashivratri, Goenka put out a supposedly funny tweet (that he later deleted) joking about Bhagwan Shiva visiting a bar. Goenka wouldn’t dare to crack such jokes on the occasion of Christmas or Ramzan but Hindumisia seems to be par for the course. The tolerance of the majority community is being taken advantage of by HINOs (Hindus in Name Only) like Goenka. Instead of apologising, however, Goenka went on a philosophical spree in an attempt to justify his Hindumisic tweet.

The less you respond to negative people (including on Twitter), the more peaceful your life will be.

For him people who were pointing out his Hindumisia and asking for an unconditional apology are “negative people”. Since a long time now, Hindu tolerance is being taken advantage of by people like Goenka who are nothing but brown sahibs/sepoys.