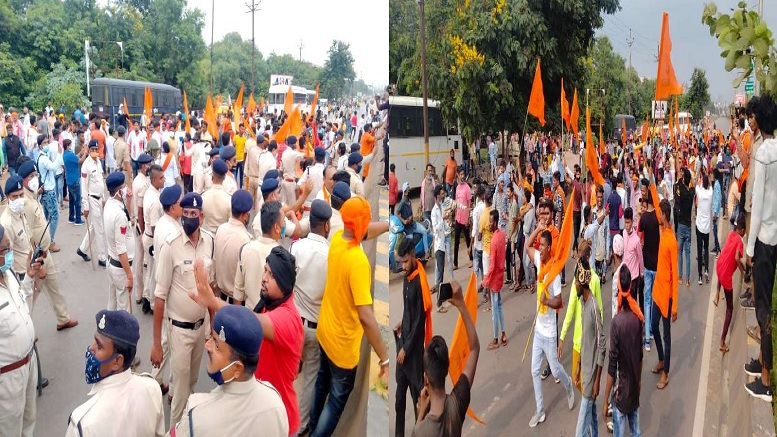 On August 3, many tribal families of Bhilai in Chattisgarh were seduced and forcibly converted by Christian conversion missionaries in front of the tribal society. The conversion mafia then indulged in blasphemy of Hindu deities. Activists of Vishwa Hindu Parishad and Bajrang Dal resorted to protests and accused these missionaries of harassment.

Police inaction following complaints led to a gherao of the police station to ensure registration of FIR against the accused. Activists gathered at the Supela police station but even after an hour, the police did not register an FIR. Protests spilled onto National highway 53 and traffic was disrupted. This spurred the police who had to call in additional forces to control the situation.

Demonstrators scuffled with the police and after nearly two hours of protest, the police higher-ups assured appropriate action in the matter. Some who were taken into custody were released. Later the police station was cordoned off, the accused priests, nuns, and missionaries were identified and FIRs were filed against them.

Hundreds of activists including Bajrang Dal’s convenor Ratan Yadav, Ravi Nigam, Shailendra Srivastava, and Jyoti Sharma took part in the demonstrations. They recognized five who were behind the conversion and a video too was handed to the police. They alleged that whenever victims came forward to complain, the mafia would harass them.