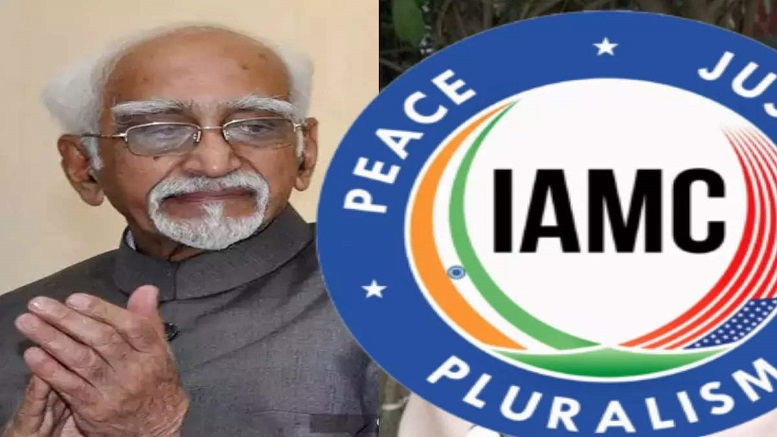 The former Vice-President’s anti-Bharat rant at a virtual panel discussion organised by Jamaat-e-Islami Pakistani backed Indian American Muslim council (IAMC) where he talked about the resurgance of cultural nationalism as opposed to civic nationalism was deplorable coming from a former top diplomat.

The executive director of IAMC is one Rasheed Ahmed who consistently uses Hinduphobia and cow urine jibes against Hindus. Asim Ghafoor another regular at IAMC meetings has links with the US and UN designated terror groups like Jaish-e-Mohammed. IAMC’s main agenda is to get Bharat blacklisted by United States commission on International Religious Freedom (USCIRF) through its malicious campaign aided and abetted by Pakistan.

When a former Vice – president of Bharat after enjoying the freebies and luxuries of the State and the country chooses to bring disrepute to the  nation or its democratically elected government from a platform which has anti-national members on board with links to terror outfits, he is eroding his own credibility or whatever is left of it.

In 2017 also Mr Hamid Ansari  drew a lot of flak while speaking from a platform which had the women’s wing of PFI as one of its organisers. The Popular Front of India engages in anti-national and terror activities according to the NIA’s report to the Union Home ministry.

The fact that he became the Vice – president of Bharat is testimony enough that our country does not discriminate on sectarian and religious grounds. Our democracy had APJ Abdul Kalam as its President who was perhaps the most popular till date.

Ansari as a former vice president was sleeping when Hindu temples were being vandalised and Hindus were being persecuted in neighbouring Bangladesh recently. He has nothing to say about the dwindling Hindu population in Islamic countries like Bangladesh and Pakistan where they have been reduced to merely 1% of the population from being more than 20%. The genocide of Hindus in Kashmir in 1990 where they were in minority drew no response from Ansari who was then a serving diplomat in Afghanistan.

As vice president of Bharat from 2007 to 2017 he did little to address the cause of Hindu minorities in Bangladesh and Pakistan on any forum as he was busy enjoying the perquisites that our democracy bestows on its second citizen.

Mr Ansari could have done the nation proud if he had raised the issue of atrocities against Hindus in Islamic countries like Pakistan and Bangladesh where the Hindus have been incessantly persecuted, their religious places desecrated and their murtis vandalised.

Mr Ansari would have made himself and our great nation proud had he -when he was speaking at the Indian American Muslim council – chosen to address the plight of Hindu minorities in these Islamic countries and their thinning numbers as opposed to their Muslim brethrens in Bharat whose population has risen to 200 million exemplifying our democratic  principles.

However Mr Ansari unabashedly chose to side with anti – Bharat forces and instead of raising the issue of minority persecution in Pakistan chose to join people of Pakistani origin in Bharat bashing delving into a preposterous and ludicrous debate which has no basis for the simple reason that Bharat is a vibrant democracy where government’s are chosen by the people and not by military dictators. Mr Ansari was made the Vice-President in 2007 by one such elected government and remained in the chair for 10 years.

Now another elected government has been chosen by the people of this country in which Mr Ansari is not holding any position so his frustration is justified but it should not get the better of his thinking and make him act in the manner he did. Cultural nationalism is a pride of any country and great nations and democracies  especially Bharat should take pride in promoting and reveling in its rich cultural heritage.

So what was the former vice president in company of US Congressmen known for their anti Bharat stance talking about defies logic. As chairman of National commission  for minorities (NCM) Mr Ansari himself advocated  setting up of Sharia courts in every district of the country for Muslims which defies his own civic nationalism theory.

As PM Modi rightly said in 2017 when the former VP demitted office that now Mr Ansari could go back to his sectarian ideology as he will no longer be straitjacketed to uphold the constitution as the chairman of the house of elders.