Most urban Hindus believe America to be the secular role model of the world. American movies, cultural exports and academic-NGO hegemony have led some otherwise smart people to drink this kool-aid of USA as the leader of the ‘free world’, where the ideals of liberalism and secularism are practiced exactly as they are marketed.

But the reality is that America is a country rooted in Judeo-Christian principles since its foundation. Christianity, evangelical Protestant Christianity to be more precise, plays a big role in American politics and everyday life. There is nothing wrong in this – most countries of the ‘developed’ world do just that, i.e. give preferred status to the religion practiced by the majority population. For eg., UK’s official state religion is Anglican Christianity, the Queen is Supreme Governor of the Church of England and 26 senior-most Bishops (Lords Spiritual) have seats reserved for them in the UK Parliament.

What is wrong is the utter hypocrisy of American and other Western scholars, academics and activists who berate non-Western countries for preserving and promoting their indigenous religions and cultural traditions.

Now, it has come to light that a US public school (similar to government schools in Bharat) in the state of Tennessee (considered part of the ‘Bible Belt‘ states in southern USA), is carrying out Christian proselytism in guise of an elective Bible study course that is supposed to teach the Christian scripture in a ‘secular way’, i.e. for its literary value and to impart a cultural understanding of Christianity.

In 1963, the U.S. Supreme Court ruled:   It certainly may be said that the Bible is worthy of study for its literary and historic qualities. Nothing we have said here indicates that such study of the Bible or of religion, when presented objectively as part of a secular program of education, may not be effected consistently with the First Amendment.

An examination by Americans United for Separation of Church and State (AU for short) found that what Tennessee’s East Hamilton Middle School is teaching was no different from what a church-run Sunday school would teach.

AU recently sent a letter to the Hamilton County Schools superintendent detailing the teachings in one of these supposedly secular Bible classes. An article on onlysky.media summarizes the key findings and poses some questions to the school:

1.) Homework questions imply the Bible is literally true. Here’s a sampling of questions and the “correct” answers: “Q: The number of days of creation is? A: 7.” “Q: The name God gave for the garden he placed man [sic] was? A: Eden.” “Q: When God came down to see the city and the Tower of Babel, he? A: Confused their language.” “Q: How many days did it rain while Noah, his family, and the animals were in the Ark? A: 40 days and 40 nights.”Notice that this doesn’t say things like “Biblical literalists believe the number of days of creation is ___.” Instead, it suggests the world was actually created in 7 days. Which is a lie. Pastors can lie to their congregation about that sort of thing, but public school teachers are supposed to be more reliable.

2.) Students were told the Bible was written by “prophets who were directly spoken to by God,” according to AU. That’s one Christian myth, sure, but it’s not an objective fact.

3.) Students were told to transcribe Bible verses referred to Jesus and God, though it’s not clear what the academic value is to that.

4.) Students were shown videos from “BibleProject,” a group whose goal is to convert viewers. In one video, AU said, we see “a forked road, with Christianity depicted as one fork, represented by light, sunshine, and color, and all other religions on the other fork, represented by storms, shadows, and darkness.” 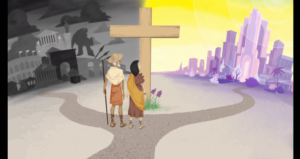 5.) Students were told by the teacher that an atheist took a Bible study class in order to prove the Bible wrong… but “came away believing that the content of the class was the truth.” That sounds more like the plot for a God’s Not Dead movie than anything realistic, but the anecdote was treated as fact and the implication was that a Bible study class could convert students.

6.) Most damning of all, the teacher wrote a version of the Hebrew name for God on the board and told kids — this is a direct quote — “If you want to know how to torture a Jew, make them say this out loud.”

How is any of that acceptable in a public school classroom?

We only know about al this because Juniper Russo, a Jewish woman whose daughter is in the class, posted on Facebook about the situation. Russo said her daughter couldn’t take other electives during that period due to a disability, which is how she ended up in the Bible class, but that wasn’t necessarily a problem since it was supposed to be taught in a secular way.

The article informs us that criticism of elective Bible courses in public high schools that they’re just Trojan horses for proselytizing are common, meaning this is not restricted to one school or state alone. Many teachers of such course wrongly treat the Bible as if it were true, which is the job of a pastor, not a public school teacher, the article adds.

Now consider the situation in Bharat. Can you even imagine a govt. school having an elective course for teaching the Gita or any Hindu religious text, even if in a secular or philosophical way? Forget govt school, even privately-run schools with Hindu management will not be able to teach such courses without howls of protest from left-liberals and due to suffocating provisions of the RTE Act which allows governments and activists to interfere in myriad ways in functioning of private Hindu-run schools.

Minority-run schools are totally exempt from RTE, even if they avail state aid, and they anyway have full freedom and autonomy to administer their educational institutions as per Article 30 of our Constitution (Hindus are denied this basic right).

USA’s long-standing alliance with notorious terror-sponsoring Islamofascist nations like Pakistan or autocratic monarchies of the Middle East also bring into its question as the ideal ‘liberal’ nation, but that is a topic deserving of a separate article.

When will Hindus do something to end these double standards and throw off the yoke of mental colonization that shackles us, due to which our civilizational identity is being eroded day by day?