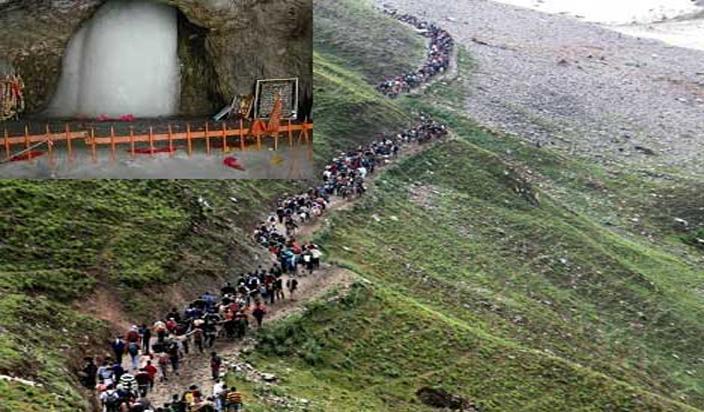 The famous Amarnath holy cave is a very important pilgrimage of the Hindu freternity throughout the globe. It is a thousands of years old centre of devotion and belief dedicated to Bhagwan Shiva. Kashmir is also known to the world due to this great and unique seat of Bhagwan Mahadev.

All chronicles of Kashmir including the Rajtarangini mention about the holy cave. Great saints, scholars, seers, kings, princes, rulers, modern politicians, writers, authors, administrators and common people have visited Amarnath cave in the past.

People of imminence have got spiritual attainment, knowledge and bliss during their yatra to the holy cave situated in the higher Himalayas. The internationally acclaimed modern saint, reformer and preacher Swami Vivekananda also explained his experiences of the Yatra to the cave in detail in his memoir about his Kashmir visit and stay in the valley.

Amarnath has also been referred as Amreshwar in the historical and spiritual texts. In Kashmir, traditionally, the yatra used to be an annual affair usually conducted in the months of Aashad and Shravan (June-July-August). The Shravan-Purnima (the day of Raksha Bandhan) is the final day of the auspicious darshan of the ice-lingum in the holy cave. The Kashmiri Pandits, the indegenous people of Kashmir, have a great reverance and faith in the Amarnath shrine ever since their origin in the Kashmir valley. They would undertake the yatra to the holy cave at least once in their life considering it as an obligatory socio-spiritual-cultural duty.

There is a very famous historical context pertaining to the Kashmiri Pandits in respect of the holy cave. It has been mentioned by Pt. Anand Kaul in his famous book, The Kashmiri Pandits, published and released on Ist January 1924. The same fact of history has references in the Sikh history books and also in a number of books written on Kashmir and Kashmiri Pandits by various authors.

During the rule of Aurangzeb, the Mughal king, Kashmiri Pandits were persuaded by the circumstances to go to the Amarnath cave to pray before Bhagwan Shiva to have respite from the cruelty of Aurangzeb and his governor Iftikhar Khan in Kashmir. Bhagwan Shiva inspired the delegation of the Pandits at Amarnath cave to contact Guru Teg Bahadur ji at Chak-Nanki (now Anandpur Sahib) in Punjab and brief him about their plight.

The Pandits did the same under the leadership of Pt. Kripa Ram Dutt and thus Guruji came forward and assured the Pandits that he would be taking up their cause and ultimately made the supreme sacrifice to uphold their pious cause. What happened thereafter is history that is well known to the world.

When the Dogra rule was established in the entire state of Jammu and Kashmir & Ladakh in 1846, the Dogra rulers made the conduct of Amarnath Yatra a special responsibility of the kingdom. Therefore, with the passage of time, Dharmarth Trust and Dashnami Akhara were given the responsibility to manage the affairs of the Yatra with the active support of the government. In Kashmir, summer vacations were recognised as Amarnath Yatra vacations up to 1970s. Every year, the yatra was conducted very smoothly by the organisers to the satisfaction of the yatris.

During the 1990s, it was observed by the politicians of the state that the Yatra arrangements alongwith the holy Cave darshan and the related affairs need to be effectively managed by a Board on the pattern of the Shri Mata Vaishno Devi Shrine Board. Accordingly, Shri Amarnathji Shrine Board was established through an Act of the state legislature in the year 2000. Technically, the Yatra and the management of the cave including darshan of the holy ice-lingum became a direct responsibility of the state sponsored Shrine Board created for the purpose. The J&K governor/Lt. governor is the Chairman of the Board who has authority to constitute the Board that is responsible for the conduct of the Yatra etc.

The good thing about this arrangement is that the state machinery is made available for the smooth conduct of the yatra while the bad thing is that there is too much of an interference by the state in the religious affairs of the Hindu community in the J&K state. The SASB is now in its 22nd year of existence and is doing its job by and large to the satisfaction of the government. The Hindu society has a number of issues including the one that it has been completely sidelines by the SASB so far as its involvement in the affairs of the yatra is concerned. The 2008 massive Amarnath land agitation is a testimony of the fact of the mental and moral involvement of the society in J&K in the Amarnath yatra and the holy cave issues.

This year the yatra was conducted after two years due to the Covid19 pandemic restrictions. Moreover, the security related issues also in view of terrorism, as usual, have overburdened the state machinery with added responsibilities. Though the yatra started this year with a great enthusiasm and gaiety, however, a number of loopholes and shortcomings were brought to the fore by many concerned agencies and the knowledgeable members of the society.

There seems to be over commercialisation in the affairs of the yatra. Many things that should have not been allowed during and for the yatra were permitted by the authorities. Issues like the regulated quota of yatris, health checks and avoiding crowds during the mountainous track yatra enroute and near or around the holy cave were not taken seriously and strictly.

The yatra had a number of unfortunate and tragic events particularly for the last three decades. These included natural catastrophes, mismanagement, cloud-bursts, heavy rains and floods, health hazards, terror related incidents and other accidents as well. The SASB and the government who are the joint custodians of the yatra affairs should have learnt important lessons from the past mistakes. However, that was not so, keeping in view what happened on July 8th, Friday this year near the holy cave.

Initially, it was made known that a cloud burst had taken place which washed away scores of pilgrims. While 16 were reported dead, 60 were confirmed as injured and scores were reported missing. The tragedy took place in the surrounding areas of the holy cave. The live videos of the tragedy were seen by the people across the length and breadth of the country. People were seen watching the gory incident thereat than to leave the danger area. Surprisingly, a large number of tents and camps were installed near the cave area where obviously crowds were allowed to assemble.

Though initially it was announced that a cloud burst had taken place, yet after three days, the Meteorological Deptt. of India confirmed that no cloud burst had been there. It said that the tragedy was the result of the heavy and continous rains and gushing waters from above the higher mountain peaks. In case it was so, then the tragedy has some serious dimensions and speaks about a major failure of the SASB and the administration.

It should have been a general guess that the heavy and continuous rains above would result in gushing waters with boulders coming down. How people were allowed to assemble in large numbers near the cave in such a dangerous eventuality. Why people manned the tents for longer period of time before and after the Darshan. Naturally, it demands a thorough probe into the whole issue in order to ascertain the reasons for such a tragedy and also to learn from such mistakes.

Only some days ago, when the yatra had not begun, a similar type of incident in the same channel of mountains near the holy cave took place. Since there were not crowds at that moment barring the NDRF and security personnel, therefore, there was no heavy loss of life. In addition to this, a large number of ‘langars’ at the cave site is not a wise idea since that encourages crowds to assemble, wait and loitering. Eye witnesses have many things to reveal and should be encouraged to bring forward the loopholes in order to make corrections.

It is important to understand the necessity of an enquiry in order to make effective changes and corrections in future and also to know the fault-lines of the arrangements, planning and deliverance. Transparency and accountability demand, keeping in view the result of the sad event, that the government and the SASB order an urgent probe particularly when the MDI has declared that it wasn’t a cloud burst….!