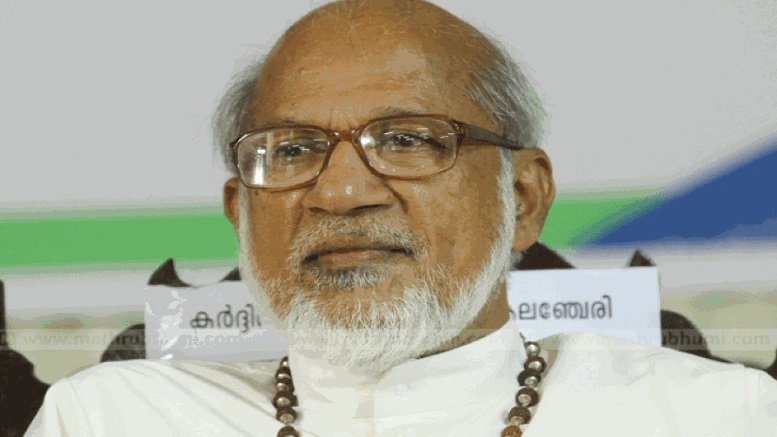 Kerala High Court has ordered that Syro-Malabar Catholic Church supremo Cardinal Mar George Alencherry and other senior church officials should face trial for massive misappropriation of funds and tax evasion in fraudulent real estate deals that were brought to light by members of the same church.

With this, the Kerala High Court agreed to the earlier ruling by a Sessions court. The High Court rejected all the six petitions submitted by Alencherry challenging the ruling by the lower court. Meanwhile, the Income Tax dept. has imposed an additional fine of Rs. 3.5 crores on the Ernakulam-Angamaly archdiocese of the Syro-Malabar Church in the same case.

The controversy pertains to the sale of over three acres of prime land belonging to the Archdiocese in Kochi city worth tens of crores of rupees to private persons. The lands were sold in two schedules to 36 persons between Sep 2016 and Aug 2017 and Alencherry himself had signed all the sale documents.

As the lands were sold much below market rate, this resulted in financial losses for the archdiocese and in late Nov 2017 Alencherry himself named a committee to investigate. The Church had decided to sell the prime land for Rs. 27 crore but it was sold for just Rs. 13 crore as per the sale documents. Moreover, the amount that had reached the Church’s account was only Rs. 9.30 crore.

These lands were purportedly sold to settle bank loans amounting to Rs. 58 crores availed from the South Indian Bank. The bank loan was never settled and the amount received from the sale was used by Alencherry in his personal capacity to buy and sell more land. The sale lacked adequate paperwork since stamp duty shown was less than the market rates. This also meant that major amounts were settled in cash.

Another Catholic priest and procurator named Father Joshy Puthuva admitted in court that it was Alencherry who introduced the middleman involved in these transactions. Joshy added that it was Alencherry himself who arranged buyers for the original plot of land after meeting them personally in Chennai.  A church procurator is an agent or a treasury officer appointed by Rome to prevent arbitrary sale of Catholic church property. Saju Varghese, the middleman, was in fact Alencherry’s Benami and the group was involved in a criminal conspiracy, breach of trust and misappropriation of money in the deals.

The purchase of new lands at Munnar is what let them down when they were unable to show the source of funds. Court documents mentioned that such real estate resale deals were chosen by top church leadership for personal gains. A committee appointed by the Church last year found losses worth Rs. 20 crores from the dubious land deals.

There are multiple allegations of financial impropriety over the sale of Church land in Kochi against Alencherry that have led to a prolonged deadlock between the clergy and the believers. Even a section of priests attached to the dioceses headed by the Cardinal came out against such deals.

The case was originally registered following an order from a single-justice bench of the High Court on a petition filed by Shine Varghese, a member of the church. The church tried its best to derail and delay court proceedings and even now says it will approach the Supreme Court.

Earlier, the Ernakulam city police commissioner had openly stated that no case will be registered against the accused. This forced the petitioner to approach the court the next day. The Kerala High Court had observed that there was prima facie evidence to indicate a criminal conspiracy, breach of trust and misappropriation of money.  The court also criticized the police for not registering a case despite being in possession of enough information.

In 2018, Mar George Alencherry was criticized by the Kerala High Court when his counsel pointed out to the court that as far as the Cardinal was concerned, the appellate authority was the Pope. He even said that no action has been initiated by the Pope against the Cardinal. The court observed it was strange to hear that Bharat’s law was not applicable to the Cardinal and asked whether he was beyond the law of the land?

Such Canon laws have no validity in Bharat and yet back then, the court initiated no action. In fact, a Division Bench comprising Chief Justice Antony Dominic and Justice Dama Seshadri Naidu even stayed the Single Judge order that had directed the police to register a criminal case against him and three others!

Back then, an emboldened Alencherry went around telling his weekly congregation and followers that it was wrong to measure God’s justice with the country’s law. He said that the faithful should give importance to God’s law. He warned his followers that there are some in the Church who think they can control the Church with the help of court orders.

Syro Malabar Church spokesperson Fr. Jimmy Poochakkatt had defended his boss saying that “there can be country’s law, even courts have delivered wrong judgements. Roman Emperor had sentenced Jesus to the crucifixion, the law of that country crucified Christ, and yet God made him the savior of mankind”!

Get to know the real ‘Mother’ Teresa on her birth anniversary