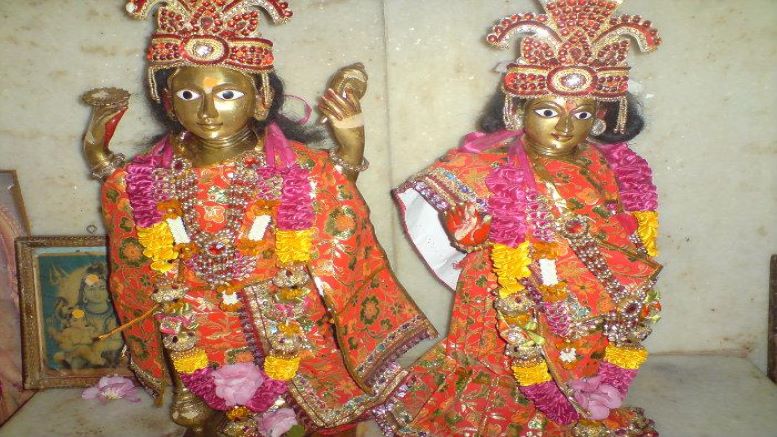 Miscreants vandalized a Radha-Krishna temple in Khadkhadi by breaking the murtis of Bhagwan Krishna and Gaumata on the night of 24 January, Sunday reports Amar Ujala. CCTV footage shows three youths leaving the temple. However, no goods or cash have been stolen from the temple. The incident has angered the locals who are distressed at the murtis being broken. Police have registered a case on unknown people under various sections.

Khadkhadi in Haryana’s Narnaul is home to a hundred-year-old Radha Krishna temple which is also known as Thakurji Mandir. The temple houses a vigraha of Radha-Krishna. On Sunday night at around 11, three young men broke into the main gate of the temple and entered inside. After this, they broke the murti of Bhagwan Krishna and also the vigraha of Gaumata.

As soon as the information about the murti vandalization reached the people, locals started gathering at the temple. Locals said that the accused have hurt the sentiments of the people. Several residents including Hemant Choubey, Sanjay Kaushik, Om Prakash Contractor, Sanu Bansal, Dipu, Hemant Acharya, and Sonu among others have demanded quick and stringent action against as well as the arrest of the accused.

Keeping the public sentiments in view, the police have registered a case against unknown miscreants under various sections and are investigating the case. They are also using CCTV footage to identify the miscreants. The police have issued a statement saying that further investigations in the case are ongoing and they are considering all aspects of the case.