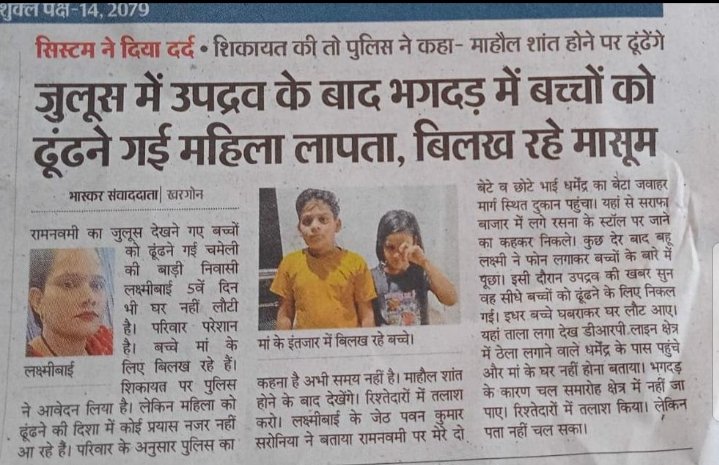 Smt. Lakshmibai stepped out to bring her children back to safety when she heard of the Islamist stone pelting on the peaceful Ram Navami procession in Khargone, Madhya Pradesh. 5 days later, she still hasn’t returned and her young children – son and daughter – are inconsolable, reports Dainik Bhaskar.

When the family approached police, they were brushed away and told that police is busy right now and would look into the matter once things cool down. Khargone is under curfew since the violence on Sunday, with only a two-hour relaxation allowed for women to get essentials.

Lakshmi’s elder brother-in-law Pawan Kumar Saronia said that his two sons and the son of his younger brother Dharmendra had come to his shop on Sunday. From there, they left to go to a Rasna stall in Sarafa Bazar. A short while later Lakshmi called to enquire about the children. Hearing about the violence, she immediately left to find the children. In the meantime, the scared children returned home on their own. When they found the home locked, they went to their father who puts up a stall nearby. Due to the ruckus, the family couldn’t immediately go to the affected spot to search for Lakshmi. They later searched everywhere, including among relatives, but to no avail.

The violence in Khargone left at least 25 people injured, including 16-year-old Shivam Shukla who is battling for life in hospital after suffering a serious head injury during the stone pelting from homes and shops surrounding a mosque. Khargone SP Siddharth Choudhary suffered a bullet injury and other policemen too were injured. At least 77 people have been arrested and many illegal properties that were used by stone pelters have been demolished. It was found that one such house that had encroached on govt land was built using funds provided under PM Modi’s flagship PMGAY scheme, and it too was demolished.

It wasn’t just the procession that was attacked, Islamist mobs also attacked Hindu houses in many colonies like Sanjay Nagar, taking advantage of the fact that men of the house were away for work or to take part in the procession. Petrol bombs were also hurled along with stones. Many houses were looted and some were burnt down. Terrified Hindus have taken refuge with relatives in other parts of the town, and many are planning to leave their old homes for good. All this smacks of pre-planning, as such pogroms are a favorite tool of Islamists to drive non-Muslims out and capture their properties or buy them out at throwaway prices.

The attackers also desecrated murtis and looted the donation box in Sheetla Mata Mandir, and tried to break into Hindu homes threatening to rape and harm women and children.

Several videos have emerged of the pre-planned violence. One video shows the Islamist mob setting things on fire and then saying ‘Chalo, rape karengey’ (come, let’s rape) and Hindu women have narrated how the attackers threatened them saying, “Ravan has arrived (to abduct you). Where is you Ram?”