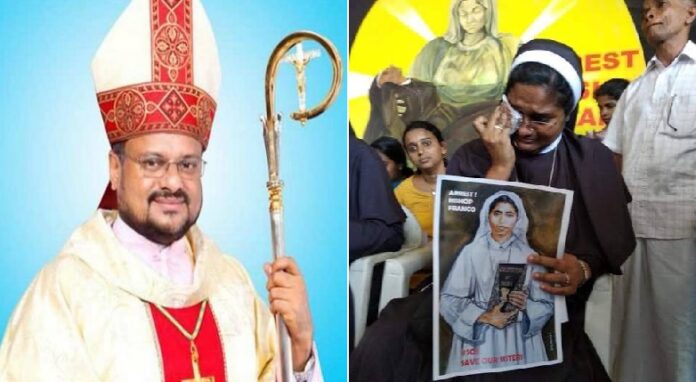 An additional sessions court in Kottayam has acquitted Franco Mulakkal, the powerful Bishop of Catholic Church’s Jalandhar diocese, who had been charged with repeated rape by a nun in a Kerala convent during visits Mulakkal made between 2014-16.

The case had become symbolic of the struggle that nuns and other victims of sexual exploitation face against the powerful, male-dominated Church hierarchy that swears loyalty to Canon Law (Vatican) above Bharatiya law. It was the first time a Catholic Bishop was arrested and booked on charges of rape and sexual harassment in Bharat.

Critics allege that Mulakkal was aided and abetted by the Church hierarchy, state governments, and elements in the judiciary at every turn. Mulakkal is a powerful figure in Jalandhar and has strong connections with politicians in Punjab and Kerala as well as in the Vatican.

The Church hierarchy failed to act on the victim’s initial complaints, and it was only when some other nuns and protestors came on the streets that the matter was heard. The survivor and other nuns living in the same hostel as the rape survivor had repeatedly complained of intimidation and pressure from church authorities. They claimed the church was trying to separate them from the survivor.

Kerala Police dragged its feet to interrogate Mulakkal, and he was finally arrested in September 2018, only to be given bail in just 40 days despite clear risk of his ability to influence and pressurize witnesses. After several attempts by Mulakkal’s legal team to get the case dismissed and delay hearings, his trial finally began in September, 2020.

In October 2018, a key prosecution witness against Mulakkal was found dead under suspicious circumstances. This happened within days of Franco being granted bail and his return to Jalandhar. Catholic priest Kuriakose Kattuthara (62) had given a statement against Mulakkal to the Kerala police. He was found dead on the floor in St. Mary’s Church in Dasuya in Jalandhar.

In December last year, a nun from Kerala named Mary Mercy was found dead at Faridkot in Punjab. She was living at a chapel under the Diocese of Jalandhar, which is led by Mulakkal, though he is currently on a ‘leave of absence’. Her family too suspected foul play.

Rights groups believe courts have not done justice thus far, and the Kerala High Court even ordered Sister Lucy to vacate the convent where she was living. Lucy was one of the very few insiders who had raised their voices against Mulakkal and sexual abuse of nuns by the clergy.

Rare judgments were passed restraining media from publishing any matter relating to the trial and procedures of the Mulakkal rape case. He was granted an in-camera trial to ostensibly ‘protect his privacy’.

As we had reported earlier on this case –

From 2014 to 2016, Mulakkal is said to have visited a convent in Kottayam, Kerala repeatedly. The convent is basically a place for catholic nuns to lead a secluded life while engaged in prayers.

According to Catholic Church hierarchy, nuns work under a male priest and the priests have complete power over them. Due to this religiously sanctioned power dynamic, it is very difficult for a nun to raise voice against exploitation by priests. Unfortunately, we do not hear many feminists raising this institutional suppression of females in Christianity.

Bishop Franco Mulakkal, a beneficiary of this power dynamic, is alleged to have raped a particular nun 13 times during his visits to the said convent. Many more complaints of sexual abuse were made by other nuns against him…the official complaint against him is of rape as well as “unnatural sex”.

As the incident came to light, a movement called “Save our Sisters” became very active in Kerala. The victim nuns and their relatives, along with civil society demanded for arrest of Franco.

In the meanwhile, Catholic Church acted against the victims! Those were “punished” and thrown out of the convent!  The convent had been their home for years. Not only that, the dirty tricks department of the Church went in an overdrive against them.

They were accused of having a ‘loose character’. Their photos with the rapist were made public, in contravention of law! Supporters of Church including Christian Times, made continuous attempts to character assassinate the nuns!

In face of mounting public hostility, Catholic Church had to beat a retreat. Mulakkal stepped down, “temporarily” after more than 2 months of continuous protests.”

We hope this decision by the Kottayam court is immediately challenged in higher courts. Anything else will be a travesty of justice.