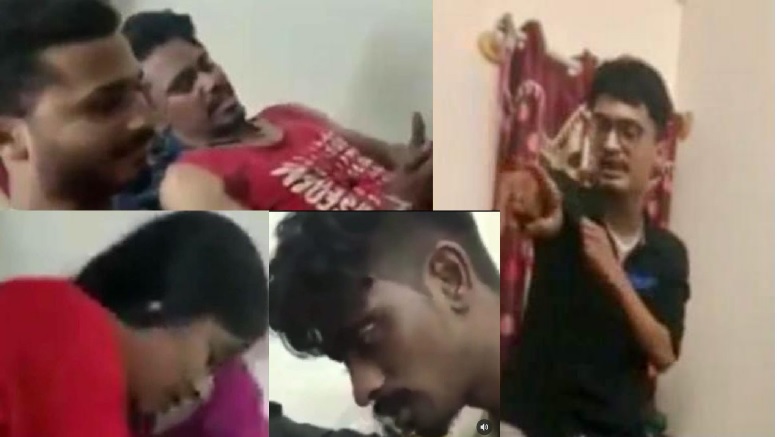 Within hours of Assam police posting a video showing a young girl being sexually tortured and assaulted that went viral, the Bengaluru police on Thursday nabbed 5 accused, including a woman, all of whom are believed to be Bangladeshis.  Another accused woman in the case is currently absconding.

The police at Ramamurthy Nagar said in a statement that the video was shot around 10 days ago, and the accused were involved in an international human trafficking racket. An officer said that they had brutally assaulted the 21-year-old woman after the 4 men raped her.

The Assam Police had tweeted “These images are of 5 culprits who are seen brutally torturing and violating a young girl in a viral video. The time or place of this incident is not clear. Anyone with information regarding this crime or the criminals may please contact us. They will be rewarded handsomely.”

Union Minister Kiren Rijiju had also appealed to all citizens to help police of all states and union territories to find the culprits.

As per a report in The Hindu –

“The gang had recorded themselves torturing the victim, believed to be from Bangladesh, and shared the clip with friends in Assam and West Bengal.

When it went viral, the North East police as well as their counterparts in Bangladesh initiated a probe. The Assam police even put up images of the accused on Twitter seeking information.

By following the chain of forwards, they were able to trace the origin of the video to a cell phone number in Bengaluru. The Bengaluru city police were alerted and special teams, within hours, tracked down the gang on Thursday evening. They were arrested in a rented house at Avalahalli, Ramamurthy Nagar. The arrested men are reportedly labourers.

They have been identified as Mohammed Baba Sheikh, Hakeel, Ridoy Babu and Sagar. The identity of the woman, who was part of the gang, is yet to be revealed.

..Our initial probe has revealed that the gang brought her illegally into the country by promising her a job. Instead, they forced her into prostitution. She was able to escape but they hunted her down. When they found her, they tortured her brutally and violated her before circulating the video,” said a senior police official.”

As per other sources (ETV Bharat, time8.in, news18.com, eastmojo.com), the names of the 4 accused men are – Mohammed Baba Sheikh, Rakibul Islam Sagar, Rifatul Islam Hridoy (aka ‘Tiktok Hridoy Babu’ or ‘Ridoy Babu/Babo’) and Hakeel. The 2 accused women are Nazrath and Kajal.

Like The Hindu, another mainstream newspaper The New Indian Express reported names of two accused as just Sagar and Ridoy Babu. It is not clear whether the full/real names were not revealed by police, or the news outlets chose to censor themselves.

The victim is believed to be 22-years-old. During the assault, the accused even inserted a bottle in her private parts. As per Time8.in, she has a troubled past – she was married in 2014 (when she must have been 15) and her husband lives in Kuwait. Facing abuse from her husband and in-laws, she returned to her parents’ place in Kishoreganj district, Bangladesh few years back. Her family was trying to send her to Saudi for a job, when she left for Bharat without telling anyone.

Accused Rifatul Islam Hridoy (26) was identified from his Facebook profile and is from Dhaka’s Hatirjjheel area. Bangladesh police suspect he is likely involved in luring innocent women with love and the false promise of marriage before selling them to traffickers. He is believed to have entered Bharat three to four months back, also without informing his parents, and was involved in many illegal activities through TikTok.

The News Minute reports that  two of the accused (Rakibul Islam Sagar, Rifatul Islam Hridoy) were shot at by police as they tried to escape when they were taken to the crime scene, and they are being treated at a Bengaluru hospital for bullet wounds.

The survivor, also a Bangladeshi national, is found to be living in a neighbouring state, and a police team has gone to bring her to Bengaluru so that she can help with the investigation.

The prompt and coordinated police action across states is an exemplary example of how such cases should be tackled. It also proves the necessity of the recent government guideline requiring social media companies to disclose the identity of the ‘first originator of information’ when asked for it in serious cases.

Multiple cases of girls and women being blackmailed and exploited using rape and other obscene videos are reported daily, with many more going unreported as per experts. Many such videos end up circulating on social media or get uploaded on porn sites. Why doesn’t our law enforcement take the same sort of prompt, coordinated action in all such cases? One recent example of the horrific apathy of our system when a Hindu minor girl is abducted and exploited by a Muslim adult was seen recently in Dwarka, Delhi – even the fact that the victim was from a Dalit community did not stir the conscience or Constitutional Morality of our state.

Part of the answer lies here – there was an instant uproar in North East states over this video as some initially linked it to the suicide of a Naga girl in Jodhpur. It is a fact that societies in the North East show far more cohesion and community spirit, even if it sometimes spills over as rabid hate for ‘outsiders’, especially Hindus, as we have seen in protests and comments from groups in Mizoram, Nagaland, Meghalaya and Assam.

The secular state has actively attacked this community spirit among Hindus and worked to dismantle every organization that encourages Hindus to think beyond their individual selves. Hence we have a situation today that despite scores of Hindu minors and girls being sexually groomed, exploited and assaulted in West UP, Delhi-NCR, Rajasthan and pretty much all over the country, most ‘educated’ Hindus hardly care and in fact dismiss such reports as ‘communal hate speech’.

The names of the accused have been updated along with details sourced from some other news sites. The Hindu had provided only partial names for at least two of the accused men, in what appears to be an attempt to mask their religious identity.