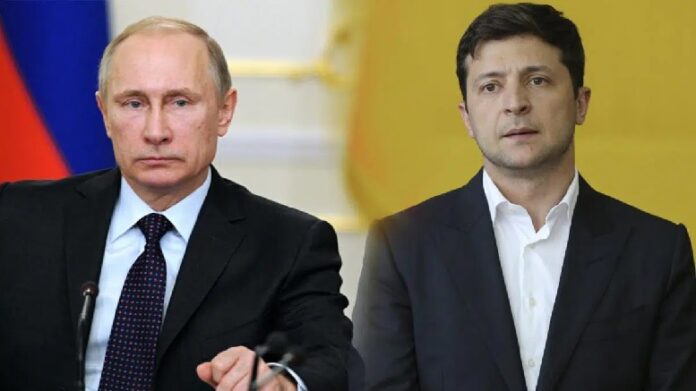 The conflict in Ukraine is moving into an extremely dangerous phase. Ukraine’s controversial President Volodymyr Zelenskiy has called on NATO to hit Russia with pre-emptive nuclear strikes. He claimed that this is the only way to “eliminate the possibility of Russia using nuclear weapons” as it would show them what would happen if they use nukes.

UK PM Elizabeth (Liz) Truss has already said she is “ready” to launch nuclear war, even if it meant “global annihilation”. She made the comment on August 24 when she was UK’s foreign secretary and participating in a campaign event in the Conservative party leadership race that she went on to win on September 5.

On September 21, Russian President Putin had said in an address that Russia would use ‘all means at its disposal to defend its territorial integrity’, while also announcing referendums in 4 Russia-occupied regions of Ukraine. This statement was interpreted as a ‘nuclear threat’ by Western governments and media, and during an address at the UN headquarters in New York, Truss dismissed it as desperate ‘sabre rattling’ by Putin.

In February, days after Russia launched its limited special operation inside eastern Ukraine, then UK foreign secretary Truss had warned that the conflict could ultimately ‘lead to a clash between NATO and Russia’ even though Ukraine is not officially part of the NATO alliance. This comment was interpreted by Russia as a nuclear threat and it put its nuclear forces on high alert in response.

Just a few days back, former CIA director and retired US army general David Petraeus jumped into the fray and warned that US would destroy Russia’s troops if Putin uses nuclear weapons in Ukraine. As per reports, US President Biden has just warned the world would face ‘Armageddon’ (a battle during end times as per Christianity) if Putin uses a tactical nuclear weapon in Ukraine.

All this loose talk of nuclear strikes and world-ending scenarios has gone on without much scrutiny from international media. If the leader or Army general of a ‘third-world’ country like Bharat had said something even remotely similar, they would have been castigated as irresponsible war-mongers!

As per many respected analysts, including American scholar John Mearsheimer, the roots of this conflict go back to US-led NATO’s creeping Eastward expansion since the fall of the USSR, in violation to assurances that had been made to Russian leaders like Gorbachev and Yeltsin. Then a Soros-backed Ukrainian regime change operation in 2014 led to installation of comic-turned-politician Volodymyr Zelenskiy as Ukraine’s President, and the new regime unleashed ultra-nationalist/neo-Nazi forces on the Russophone region of Donbas in eastern Ukraine to cleanse ethnic Russians living there. It is to safeguard these Russian-speakers and to prevent NATO from establishing bases in Ukraine that Putin claims to have launched his special operation.

US and other Western nations have been supplying sophisticated weapons to Ukraine during this conflict, and are accused of carrying out a proxy war. There have been reports that elite US-UK special forces are present in Ukraine and other Western mercenaries too are involved in the conflict.

Given the irresponsible rhetoric flying around from leaders of the ‘civilized first world’, there is a very real risk of events spinning out of control and the world stares at a real possibility of nuclear war. Its time for other world leaders to intervene and counsel all stakeholders – USA, Russia, NATO and Ukraine – to go back to the negotiating table.