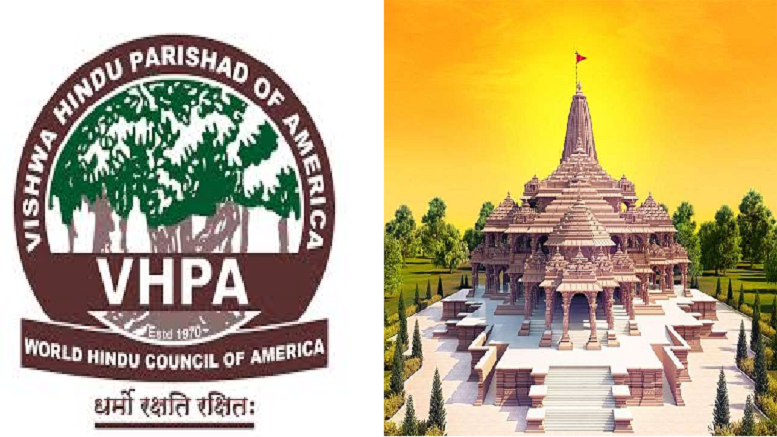 The World Hindu Council of America (VHPA) strongly denounces the attempts by Hinduphobic organizations that have banded together to prevent Hindus from expressing their right to practice their religion freely and publicly by commemorating one of the most significant events in Hindu history.

The event, foundation laying for restoration of the temple, in Ayodhya, India at Bhagwan (God) Shree Ram’s birthplace, almost 500 years after it was destroyed an Islamic foreign invader. The Hinduphobic groups are actively canvassing the billboard display owners to dissuade them from displaying the images of Shree Ram and the images of future mandir (temple), a perfectly legitimate activity guaranteed by the constitution of the United States.

“We condemn efforts by ‘Stand with Kashmir’ and Islamist organizations to prop-up proxy groups and individuals with Hindu sounding names, to vilify and slander revered Hindu deities. The new temple at the birthplace of Shri Ram in Ayodhya (India), represents the positive sentiments and hopes of 2 billion Hindus and Buddhists from India, Thailand, Cambodia, Bangladesh, Malaysia, Nepal, Korea, Indonesia Vietnam, the US and the EU.”

“The malicious statements by some organizations about Shree Ram Janmabhoomi temple in Ayodhya are driven by their Hinduphobia. This temple is being built on the site where the original Ram Mandir (temple for Bhagwan (God) Shree Ram stood and was destroyed by Moghul invader, Babur. The monument to slavery of Indians is now being restored to those who have been freed after 1000 years. It marks a new beginning for Hindus, just like replacement of statues of slave owners around the world marks the next step in racial justice.”

“This is akin to the Iconoclastic mindset that destroyed Ram Mandir in Ayodhya originally. This is flagrant violation and attack on religious freedom and Hindus’ Constitutional right to practice their religion”

In 1992, in what is reminiscent of the taking down of statues of slave owners, Hindus took down Babri structure that stood on the sight of the birthplace representing one of the most revered avatars of God, Shree Rama for close to 500 years. The Babri structure, built by the foreign invader Baber who killed and enslaved thousands of Hindus, and then destroyed the temples.

Hindus fought many battles, physical and legal over centuries. Finally, in November 2019, the Supreme Court of India ruled that the original temple can be restored at the site where
Babri structure stood.

The World Hindu Council of America has welcomed this decision of the Supreme Court of India, just as VHPA has welcomed the taking down of statues of slave owners. More details are available on our website.