Will the Quadrilateral Tie-Up Checkmate China at ASEAN? 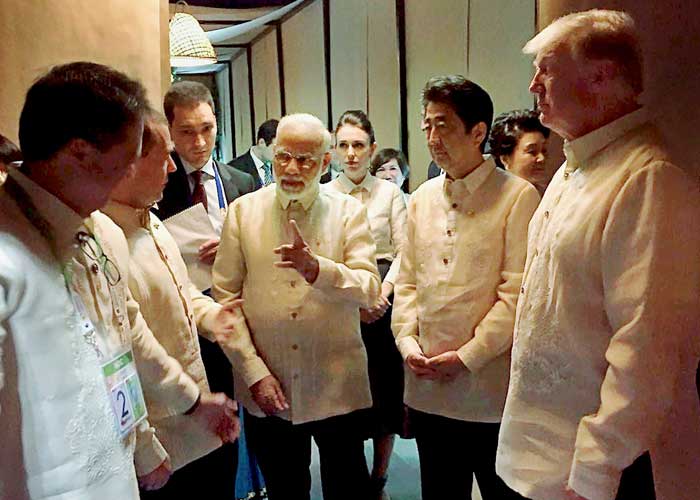 As Prime Minister Modi attends  the ASEAN Summit in Manila, Philippines, all eyes would be on the quadret of Bharat, US, Australia and Japan, and if they are able to checkmate China’s prowess & dominance in the South China Sea and it’s growing influence in the Indian Ocean.

Another interesting thing to watch would be if Trump is able to pressurise China to rein in an eccentric North Korea in the face of acrimony between Trump & Kim Jong – Un. The US wants to check China’s growing hegemony in South China Sea and has been at loggerheads with the Dragon along with it’s staunch ally Japan which is feeling the heat and looking up to the US for help. It would be interesting to see how Trump handles this conflicting situation vis a vis China.

Countries like Vietnam & Philippines have been egging on Bharat to take on a more active and supportive role in South China Sea to counter the rising dominance of China, and Bharat’s response would be interesting. China & Bharat were in an eyeball to eyeball confrontation in Doklam just a few months​ back and Bharat’s resilience & restraint in the midst of China’s rhetoric won it many accolades.

However, the acrimony between the two nations continues with China continuing to shield Masood Azhar at the UN much to the chagrin of Bharat, apart from blocking Bharat’s entry in the NSG. Moreover, China’s OBOR initiative is an attack on Bharat’s sovereignty as it intends to criss-cross through POK which is Bharat’s territory and this has rightfully been opposed by Bharat.

Any attempt by Bharat to play a more active role in the Pacific waters will be perceived by China as an act of aggression and it could retaliate by creating problems for Bharat in the eastern sector and in the Indian Ocean. It would be interesting to see how Modi and Bharat tread diplomatically on the South China Sea issue.

America, the main player in this quartet and the only one with the maritime might to take on China, has been opposing China’s dominance in South China Sea by sending its own aircraft carriers in the region; however, it is also relying on China to rein in the North Korean dictator & put a lid on his nuclear programme, and it would be interesting to see how far & deep it is willing to go in South China Sea to help its allies and counter China.

The US role in the success of this new alliance will be crucial, and a peep into history shows that America has held its interests paramount and its foreign policy is often dictated by what it perceives right for its own self as opposed to the interest of a particular region or territory. The huge trade surplus that China enjoys vis a vis America & Bharat is another deterrent in the path of the 4 country alliance as China enjoys deep access to the market of these two countries. The skilled labour that is available with China gives it a huge competitive advantage – it won’t be easy for US & Bharat to shrug off Chinese economic supremacy.

US has a whopping 350 billion dollar trade deficit with China while Bharat’s imbalance is to the tune of 50 billion dollars. With China literally controlling the economic strings of both the countries, there is a big question mark on the potency of the quad and how it confronts the dragon. Australia is the only country which enjoys a trade surplus with China and would be unwilling to rub the latter the wrong way.

In the midst of these complex intricacies in relations it would be interesting to see how the quartet goes about its task of hemming in the Asian giant.For Bharat it seems a tight rope walk as it is on board with China on BRICS apart from forging a trilateral alliance with China & Russia.

Can Trump, who initially thought of skipping the 18 nation East Asian Summit and then retracted fearing criticism, before finally leaving after a brief attendance, be trusted with nurturing the nascent 4 nation alliance, is anybody’s guess.