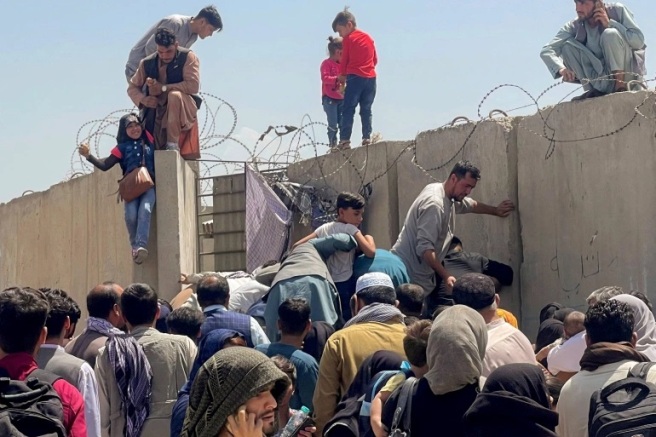 With the capture of key cities of Afghanistan and essentially the takeover of the whole country by the Taliban, many Afghans are rapidly trying to flee the country.

As we all know, Bharat had legislated the CAA so as to help the threatened non-Muslim persecuted religious minorities (mainly Hindus and Sikhs) of Afghanistan, Pakistan, and Bangladesh to get citizenship in Bharat. The CAA is a democratically passed law by both the Houses of Parliament with more than sufficient majority. Owing to the massive worldwide backlash by pro-Islamists and other vested interest groups against this law, the government has so far not even framed the rules for CAA although the law was passed almost two years ago.

In a previous post, we highlighted how the failure to frame the rules for the CAA has caused great hardships to Hindu and Sikh refugees living in Bharat causing many to even head back to the countries they fled from.

It is therefore shocking that the same government that was attacked for trying to help Hindu and other Dharmic minorities through the CAA and which therefore decided to put the CAA on the backburner, is now going out of the way to help bail out fleeing Afghans by granting them fast-tracked visas. Per this report, ‘The government today announced a new category of electronic visa to fast-track applications from Afghans who wish to leave the Taliban-controlled country. The new visa category is called “e-Emergency X-Misc Visa“.

The report also states that the effort was to ‘facilitate repatriation to India of those who wish to leave Afghanistan’ and that ‘Hindus and Sikhs from the country will be given priority.’

The foreign ministry spokesperson Arindam Bagchi also said that ‘The government will take all steps to ensure the safety and security of Indian nationals and our interests in Afghanistan.’

Another report said that ‘the Indian government may grant refuge to Afghan citizens, especially those facing threats or fearing persecution from the Taliban, against the backdrop of the rapid deterioration of the security situation in Afghanistan.’ The report said that the sources providing this information had, on the condition of anonymity, specified that those likely to be granted refuge are ‘political leaders or activists, human rights workers, media personnel, members of minorities and people who have worked with the Indian government.’

Some wealthy nations have agreed to take in Afghan refugees but these nations can surely do more than they are promising. A Forbes report of August 14 said that the US evacuated 1,200 Afghans under the special immigrant visa (SIV) and aims to bring out 3,500 more.  There are said to be at least 21,000 people in the SIV pipeline and the number could increase to around 50,000 to 80,000 people once family members are included.

Additionally, the country will allow ‘thousands more’ to seek asylum. The US can definitely do better given its size and resources. The country also needs to do more because it is in part responsible for the current situation by participating in the two decades war and leaving without defeating and eliminating the Taliban.

Canada is ready to welcome 20,000 Afghan refugees. Once again, this number is too small considering the size and resources of Canada.

The Forbes report also states that some NATO member countries agreed to pause the deportations of Afghan nationals: Finland, Sweden, Norway, and Sweden have currently stopped deporting Afghanistan nationals. However, six countries: Belgium, The Netherlands, Greece, Austria, Denmark, and Germany objected to putting the deportation of Afghan nationals on hold and warned against opening the doors to Afghan asylum seekers.

The Biden administration was seeking other avenues too such as having Kazakhstan, Tajikistan and Uzbekistan take in thousands of applicants, but no agreement has been reached so far in this regard. The Middle East country Qatar which has a US military base was similarly approached by the US administration but no formal agreement has yet been made public.

This is not a surprise because even Islamic nations put their own interests before the interests of co-religionists from other nations.  Recently, both Saudi Arabia and Bangladesh had been reluctant to take in Rohingyas. In a recent development, it is learned that Bangladesh too has outright refused the request of the US to take in Afghan refugees. ‘Bangladesh Foreign Minister Dr. A K Abdul Momen told the UNB in Dhaka that Bangladesh received a request from the US which it rejected as it is already facing problems by giving shelter to the Rohingya refugees who came to the country from Myanmar. ‘

Other than the fellow Islamic nations, the US also approached Kosovo and Albania and the countries have not made any formal commitment so far.

Given how most countries of the world are responding including European countries and fellow Islamic nations, Bharat too must not go overboard in accommodating Afghan nationals. The government must also not forget how the world responded to the CAA which was intended for helping persecuted Hindus and other Dharmics.

For now, Bharat has promised to fast-track visas to Afghan nationals. It is hoped that this does not later lead to fast-tracking citizenship to non-Dharmics while Dharmics waiting for rules to be framed for CAA continue to wait forever.

Bharat must also not forget how the population of Hindus and Sikhs dwindled in Afghanistan irrespective of which side ruled. Once thriving with a huge number of temples and Gurdwaras, it is now said that the country has just a hand full of Hindu temples and Gurdwaras left. Even today, those Hindus and Sikhs who fled Afghanistan are not recognized as refugees by many countries including the UK.