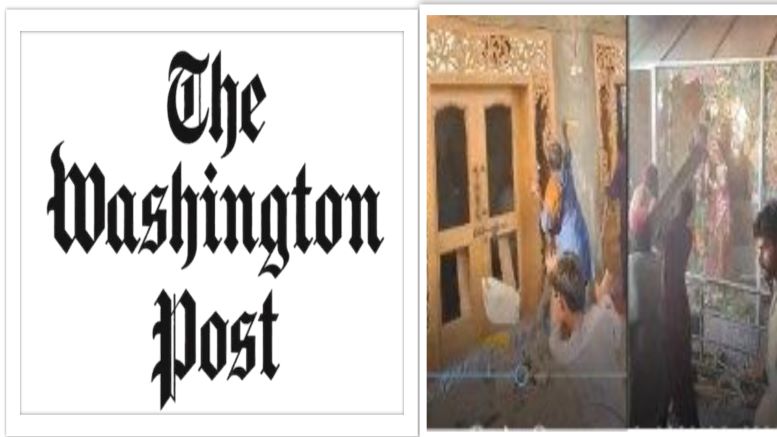 Hindu persecution and vandalization of Hindu temples are commonplace in the Islamic nations of Pakistan and Bangladesh. Yet, the jaundiced sight of the West has always conveniently overlooked such persecutions. The western media has time and again made its Hinduphobic agenda amply apparent.

WaPo (Washington Post) has, however, justified the unjustifiable as it has given its own spin on the Hindu temple attack news.

In a clear attempt to water down the horrific instance of Hindu persecution WaPo says:

The attack followed an alleged desecration of a madrassa, or religious school, by a Hindu boy earlier this week, the police added.

It has been a classic Islamist strategy to first make allegations of blasphemy so as to enable the Islamists to justify their attack on the Hindu minorities. But even more appalling is WaPo‘s normalizing the exodus of Hindus from the Islamic country, a point it has reiterated in its article about the action taking by the Pakistani government.

In general, Muslims and Hindus live peacefully in predominantly Muslim Pakistan, but there have been attacks on Hindu temples in recent years. Most of Pakistan’s minority Hindus migrated to India in 1947 when India was divided by Britain’s government.

There is a deliberate attempt to sweep Hindu persecution under the carpet. While WaPo tries to project camaraderie between Hindus and Muslims, the reality is lightyears away. Hindu minor girls are abducted, raped, forcibly converted, and pushed into sex slavery by Islamists. The plight of Hindus and Hindu temples in Bangladesh or what was once East Pakistan is no different.

Unlike what the article states, Hindus didn’t ‘migrate’ from Pakistan but were forced to flee by the horrific violence unleashed by the Islamists. The Hindu persecution that began in 1947 has continued unabated for more than 7 decades now. However, facts hardly matter for media that has an agenda to peddle.

Here are some instances of ‘peaceful living’ as per WaPo:

1) School-going children are being indoctrinated through state-sanctioned textbooks that demonize Hindus by calling them Kafirs (derogatory slang for non-believers) and saying that all evils that have fallen upon Pakistan are due to the Pakistani Hindus.

2) Yet another case of a young Hindu girl being abducted and forcefully converted to Islam has come to light. Aarti (22) was abducted while going to work and later forcefully married off to a Muslim man in Larkana, Pakistan.

3) Shameti Meghwar, a Hindu girl belonging to Umerkot, a district in the Sindh province of Pakistan, went missing 18 months ago. After her recent recovery, her testimony revealed chilling details of her ordeal – after being abducted she was forcefully converted to Islam and ‘married’ before later being forced into prostitution. After providing the affidavit of her statements, Shameti Meghwar was handed over to her parents.

4) Muhammad Abdul Salam, get a helpless Hindu boy, called Hindus filthy creatures, forced him to abuse his Gods & chant ALLAHU AKBAR. This kind of insult is a common thing against non-Muslims in the Islamic Republic of Pakistan.

5) On June 2nd, a Bhajan going on at Shri Radha Krishna temple in Daulatpur of Narasingdi District was forcibly prevented by Islamists. Local Hindus engaged in singing the praise of Bhagwan Krishna were thrashed, vigrahas demolished and thrown away. The local Hindus had been warned and threatened over the years to stop the Kirtan (singing Hindu devotional songs) and this attack happened since they didn’t comply with the Islamist demand!

We have merely touched the tip of the iceberg as far as Hindu persecution in the Islamic nations of Bangladesh and Pakistan goes. While the western media often projects Bharat as ‘intolerant’ towards its minorities, the real intolerance in Islamic nations is white-washed as WaPo has done in the recent instance of vandalization of a Hindu temple in Pakistan.

Hindus are the only religious community in the world that lacks state support which probably emboldens the western media to peddle half-truths and even downright lies to white-wash crimes of Abrahamics in places where the Hindu community is in minority.