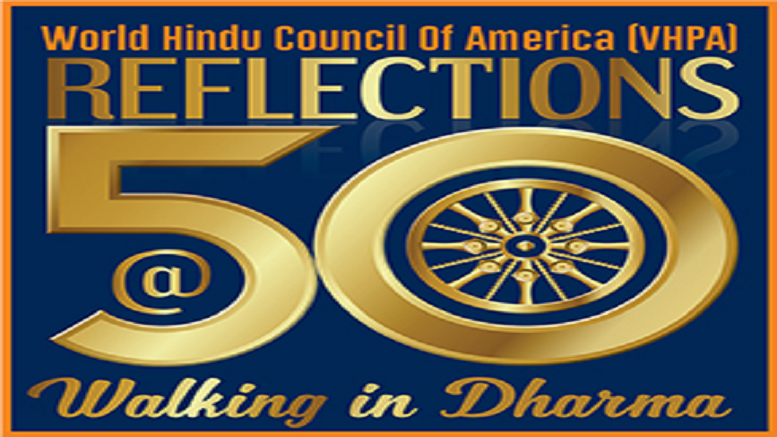 The Hindu way of life and thinking, far from being a mystical eastern religion, has had a profound influence on the west, leading to successes on American soil, not in terms of material wealth, but in individual satisfaction with immense self- content.

Four outstanding personalities from different walks of life bore testimony to realizing this principle in their lives and showcased their stories during the 50th anniversary celebrations of the World Hindu Council of America (VHPA).

The keynote speakers set the “virtual” stage for “[email protected]: Walking in Dharma” on Sept. 19 and 20 for an upcoming real life congregation and grand celebration next year to commemorate World Hindu Council of America’s 50 years of fostering the Hindu socio-cultural-spiritual movement. 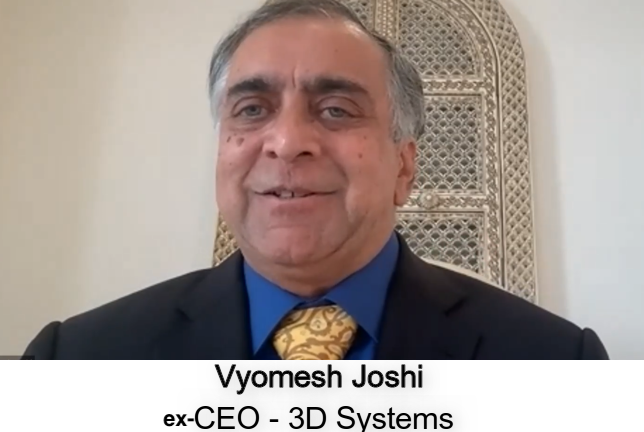 Vyomesh Joshi, one of the biggest names in the printing industry and an influential Indian American, till recently helmed 3D systems, a leading manufacturing solutions company, as President and CEO.

Interweaving references from the Bhagavad Gita, Vyomesh spoke on “Authentic Leadership” and how Hindu scriptures guided him in leading global companies as well as dealing with triumphs and setbacks.

Citing a Gallup poll, he noted that followers look for four attributes in a leader, namely – Trust, Compassion, Stability and Hope.

Trust, he said, comes from Trustworthiness which in turn comes from competence and character. Humility is equally important and there’s no room for ego. Stability is the third attribute in an authentic leader.

Referring to the Second Chapter in the Gita, Verse 54, Arjuna asks for help in understanding “Sthita prajna” or a stable intellect to control the senses, mind and desires. Stability is about the present but what is needed for the future is Hope – the fourth attribute of an authentic leader: Arjuna did not want to fight but Bhagwan Krishna explains that only the body perishes, the atma or the soul never dies. Every leader must offer hope in difficult times. 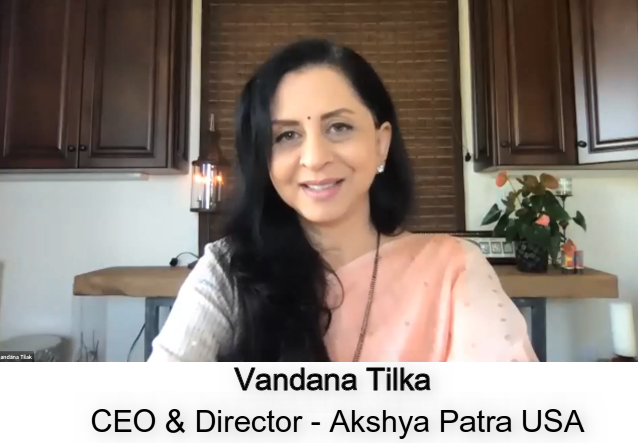 Vandana Tilak, CEO of Akshaya Patra USA, called “children who have to go hungry an injustice.”

In her keynote address on “Seva – the First and Last Frontier,” she dwelt on her philosophy of looking beyond oneself and her service through a leading non-profit organization – Akshaya Patra. Akshaya Patra serves 1.8 million vegetarian meals in 19,500 government schools in India in 15 states every single day.  It has also served 8.2 million meals to date to stranded migrant workers since the lockdown on March 26.

Seva, for Vandana, is an unconditional exchange of love, thoughts, words and action. Whether it is a person, animal or this planet – each one is a living breathing organism and they all “deserve the respect and dignity of seva.” We are just mechanisms and the universe conspires to do good through us, the “divinity in each of us is fulfilling the destiny of those we meet,” according to Vandana Tilak.

Continuing in the same vein, she noted that the Universe ensures that 1.8 million children are fed every day through Akshaya Patra. This one single thought connects her to what she does.

This is an opportunity for us, she said, not the beneficiaries. More importantly, seva doesn’t tolerate an ego. The minute you put yourself on a pedestal, the Universe will find a way to bring you down to earth, she said.

A student of Ayurveda, she said one of the first things that is taught is the nature of hunger. “When we are hungry, we eat healthy food and exercise. This is Prakriti or the natural flow. When we are not hungry and overeat, it’s vikrutti. But when you keep a little bit aside knowing that someone else needs it and both of you are happy and fed, that is sanskriti.” 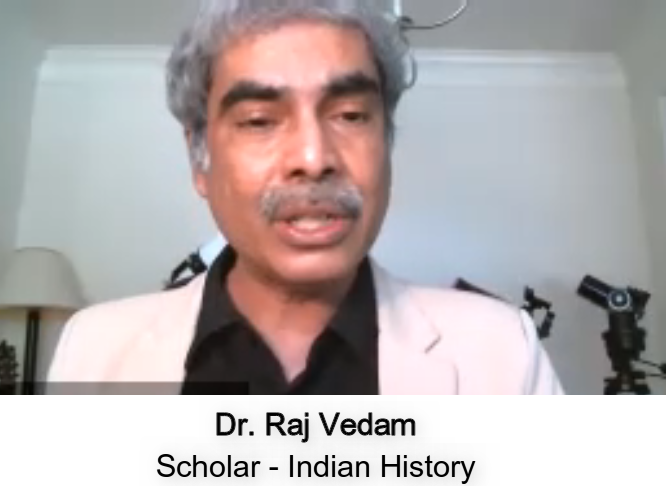 Dr. Raj Vedam , an acclaimed scholar and co-founder of  a Think tank, Indian History Awareness & Research, based in Houston, highlighted how Hindu identity has steadily come to be defined not by Hindus but by others, subverting Hindu identity.

Vedam traced the roots of modern sciences, mathematics and technology and his findings contradicted western narratives that the Indian civilization’s knowledge of mathematics and science came from outside India.

One of the consequences of the “identity crisis” is growing attacks on Hindu identity by organized groups with huge funding from abroad and within the country. The media and universities have also turned into “hotbeds of Hinduphobia.”  Hindu student groups face enormous backlash and anti-Hindu pressure by hate based organizations, Vedam said.

The western narrative peddled the view that Aryans invaded India, brought in the caste system, imposed a Vedic religion and drove the original inhabitants towards the southern part of the country.  One of the direct consequences of the introduction of English in India was the discontinuation of publications of books in Sanskrit and funds were instead used for the propagation of English. This distancing from Sanskrit meant that Indians could no longer connect to their roots, Vedam said.

One way to reclaim the Hindu identity, he said, is by becoming ambassadors to exemplify Dharma as a logical, rational, responsible system with solutions for global problems, living a dharmic lifestyle, learning about Hinduism, celebrating festivals, visiting temples, supporting scholars, institutions and organizing outreach talks and conferences. 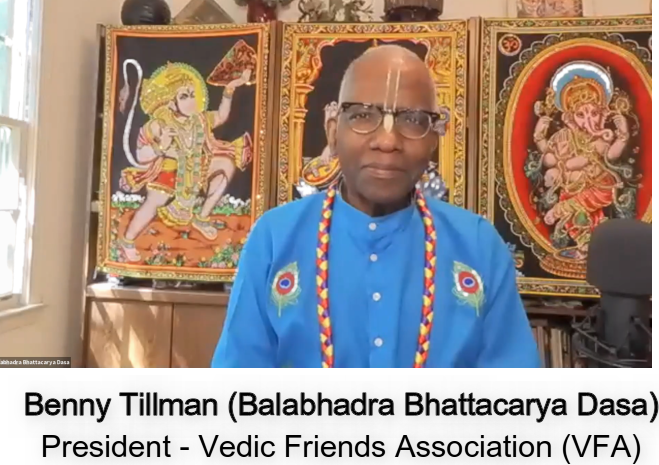 Benny Tillman aka Balabhadra Bhattacarya Dasa is a direct disciple of his Divine Grace A.C. Bhaktivedanta Swami Prabhupada. He serves as the first African American President of the Vedic Friends Association dedicated to the preservation, promotion and application of Vedic culture and philosophy.

Society, he pointed out, is confused about the real purpose of life, which according to Vedic teachings should focus on self-realization as well as material development. While living in this world, we must learn to connect these two and that’s yoga. Contrary to popular belief, yoga is not just a form of exercise, it is much deeper than that, he said.

The uncertain situation in the world today presents an opportunity for Hindu leaders to offer practical solutions derived from the Vedas. The need of the hour is to create a more accessible process to introduce Hindu culture and philosophy to the general public and reaching out to communities. He lauded the Hindu youth in Houston for their support in the Black Lives Matter movement.

Benny concluded his address with the one word that “encapsulates the entire Vedic culture” – Namaste. It is a recognition of the divine within each one of us and respecting the spiritual existence within us. We need to lift the word “Namaste” and teach people all over the world to use this to develop a better sense of love and respect for each other.

Among the highlights of the two day-webinar were eight enlightening panel discussions with well-known speakers – entrepreneurs, heads of organizations, religious leaders, academicians, dignitaries, and youth leaders.

Engaging youth in community service has been a cornerstone of the VHPA’s mission. Two panels: “Hindu Youth – Being the Change Today for Better Tomorrow” and “Evolving Nature of Seva (service) in North America” were dedicated to youth and volunteerism to focusing on their current relevance.

Other topics like, “The Hindu Woman as Sustainer of our Timeless Tradition,” “Influence of Hindu Heritage on Life Choices and Decisions” and on early teaching, “Learning Through play,” “The Role of Dharmic Houses of Worship – Challenges and Opportunities,” “The Power of Dharma in Action” and “The Legacy of the Hindus in North America,” were discussed.

World Hindu Council of America (VHPA) had earlier planned Swarna Jayanti gala event to mark its jubilee milestone, however, the occasion had to be moved to September 2021 due to the Covid-19 crisis. The virtual community conference served as a glimpse into the jubilee event planned next year

About 3,200 people registered and participated in the virtual conference.

“That humble initiative of 1970 has blossomed into a formidable movement over five decades, with many Hindu organizations joining in partnership along the way. Every aspect of Hindu American life, for four generations, has been positively touched by VHPA through its visionary and transformational programs. As we stand at this crossroad, and behold the future, filled with aspirations and hope, we must also turn our gaze back on the amazing journey of 50 years, walking with Dharma in this land of America,” Asthana said.

“As a community, how far have we travelled on this four-laned highway of Dharma, Artha, Kama and Moksha? Where are we? Where do we want to be? And, what do we have to do, to get there,” he asked?

“In this reflection conference, we learned about many new dimensions of Hindu unity and realized the needs of Hindu Society in modern times. As Hindu Americans, let us achieve those by our own efforts ‘Swayamev Mrugendrata’ in the near future, he said.

“[email protected]: Walking in Dharma” represented a confluence of prominent Hindu thought leaders to do a “manthan” of the history of Hindu Americans in the last half century, and chart its course for the next half century and beyond, according to Dr. Jai Bansal , Conference convener.