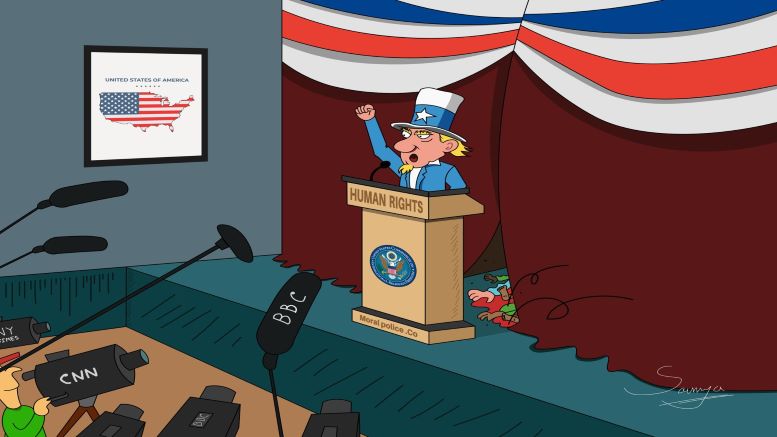 We dream of a world that accepts pluralistic ways of life, tradition, and worship through democratic means and practices. CDPHR office bearers and team members consist of academics, lawyers, judges, rapporteurs, social activists, journalists, and independent researchers who have an established repute in their respective areas of expertise.

About the Report on the USA

The organization has a network in many countries of the world that share incidences of violation and write reports too. In this case, as a civil rights activist, Arvind Kumar, one of the writers of the report, has first-hand experience of the disturbing human rights issues prevalent in the USA, whether it is regarding religious discrimination or other minority issues.

Further, Human Rights documents were reviewed and analyzed to ascertain on what parameters the human rights violations are happening in the USA. We too had interactions and interviews with eminent human rights activists through online meetings and telephonic meets to gather qualitative and quantitative data. The names of the interviewees have been withheld as per research ethics. Reports of human rights organizations, government agencies’ data, census, and other records prepared over the years were also referred to. We used news and reports in the public domain which also includes policy documents of the country. The cases of persecution included in the report are the ones which have come in open in public media.

Following are the major findings of our report:

After the victory in the Second World War, the United States was instrumental in setting up various global institutions, like the UN, based on lofty ideals that would guarantee human rights and help remove human suffering. Further, the USA took lead in ratifying conventions and treaties of the UN in making equitable and inclusive societies.

Yet, the United States of America is in violation of each of these agreements and has perpetuated the wrongdoings that these agreements seek to eliminate. As a result, the USA is responsible for immense suffering inflicted on the people of the USA as well as the rest of the world. Much of this suffering is due to biases built into the system, and these biases themselves are based on racial and religious considerations for the most part, with prejudice against women also playing a significant role.

One of the key ways in which bias is built into the system is by evading the creation of strong democratic institutions. This has resulted in the continued deprivation of voting rights for Black people and other minority races. Rampant election fraud on account of lack of voter identification cards, independent voters being kept out of the debate stage, and opposition by White Anglo-Saxon Protestant (WASP) politicians and judges to any effort to create a mechanism to ensure voter integrity are features of the American electoral system.

Blacks and Hispanics are used as voter bases by supremacist Whites and are permitted to participate in politics only on the terms set forth by the latter. Such terms include accepting a subservient role in which the supremacist Whites are given an exalted position as their saviors and leaders.

Freedom of Religion is one area in which the USA makes much noise, but it fails in practice as it has its own preferred religions. Hindus have been a particular target of the American political establishment, media, and academia, while both Hindus and Sikhs have faced violent attacks on the streets. Hindus, Shia Muslims, Mizrahi Jews, and Orthodox Christians are often falsely accused of carrying out human rights violations around the world.

The judiciary is heavily loaded with Catholics and Jews of European descent and is biased against Blacks who face a high rate of incarceration and more severe sentences for crimes similar to those committed by Whites.

The status of women in the USA is a secondary one. It is painful to learn that the sexual exploitation of women and girls in educational institutions is normalized. Women in the USA are targets of violence, especially at the hands of prominent public figures. In these cases, the law has completely failed the women who are forced to silently accept the crimes if the perpetrator happens to be a person from a position in politics, media, or business. There are instances of women’s organizations being controlled behind the scenes by men and thus, women are forced to express political loyalty as per their wishes.

The USA has used international organizations to push other countries into accepting American dominance around the world and exerts illegitimate economic control over much of the world. It is also culpable of fomenting unrest in various countries and starting several wars with the aim of continuing its dominance. To this end, it has not shied away from using or facilitating the use of, chemical and biological weapons.

In recent years, free speech rights and freedom of the press have been eroded and Internet controls have been institutionalized. Voices are suppressed on social media, the academia, as well as the print and broadcast media, and are forced to speak in one voice that matches the opinion of the USA government officials. In general, any opinion that is not part of the approved ‘liberal’ or ‘conservative’ discourse is branded as an ‘extremist’ position, and people with independent positions are hounded out of the public space.