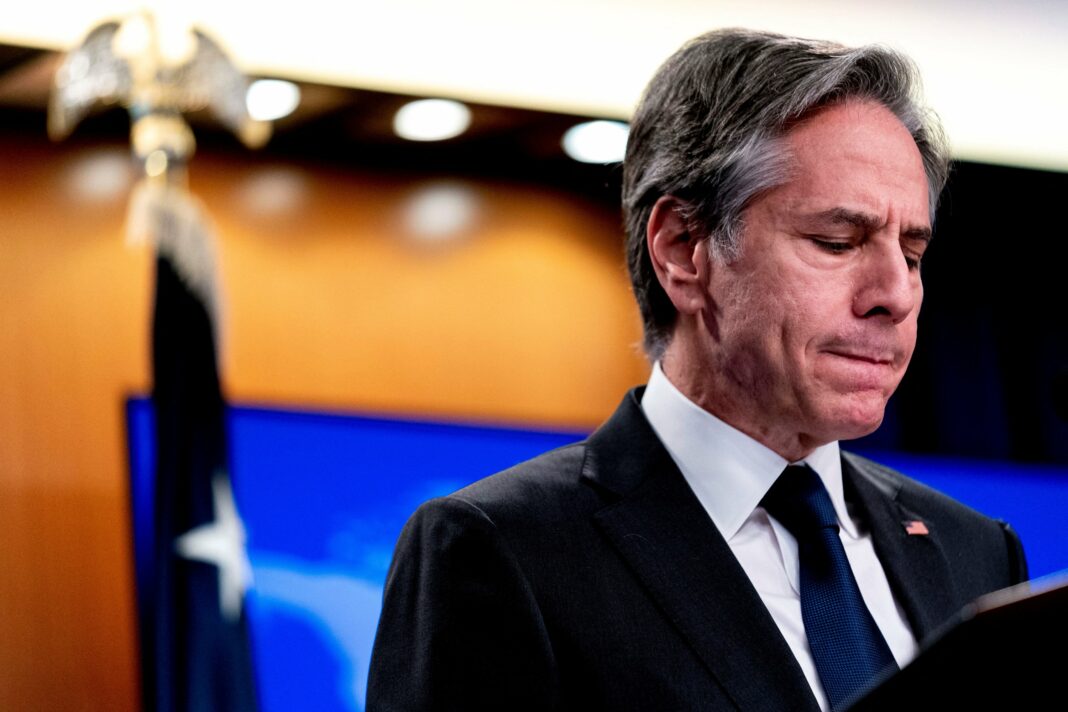 Continuing its unfounded campaign of calumny against a country it calls a ‘key partner‘, the US government yesterday said “it is monitoring some recent concerning developments on human rights violations in India by some government, police, and prison officials”.

Astoundingly, US Secretary of State Antony Blinken made these schoolmasterish remarks at a joint news conference with Defence Secretary Lloyd Austin and their Bharatiya counterparts — External Affairs Minister S Jaishankar and Defence Minister Rajnath Singh — after the conclusion of the 2+2 Ministerial on Monday in Washington DC, USA.

“We are monitoring some recent concerning developments in India, including a rise in human rights abuses by some government, police, and prison officials,” Blinken said in his opening remarks. “We share a commitment to our democratic values, such as protecting human rights. We regularly engage with our Indian partners on these shared values,” Blinken said.

India’s English-language media (ELM) went to town with these comments, which for them eclipsed anything else said at the summit. Here’s a sample of their headlines, conveying barely-suppressed glee of Lutyens’ editors:

More important and fact-based things said at the summit received relatively lesser coverage in our ELM. For eg., both countries called on Pakistan to ensure its territory is not used for terror attacks, and condemned the use of terrorist proxies and cross-border terrorism in all its forms.

Bharat’s EAM S Jaishankar put the chatter over Bharat buying crude oil from Russia at discounted prices in the right perspective by stating, “our total purchases for the month would be less than what Europe does in an afternoon,” tactfully asking the West to get its own house in order before pressurizing other countries to follow their sanctions against Russia.

Anthony Blinken believes in maintaining US primacy over world affairs. Many Americans believe in “American Excpetionalism” i.e. the idea that the United States is inherently different from other nations and ‘destined’ to play a leading role. Blinken has also shown an inclination for hard-line interventionism such as believing US did ‘too little’ in Syria.

Could this increasingly shrill campaign of ‘democratic backsliding’, ‘human rights violations’ directed against the Modi government, while actually ignoring gross human rights abuses and mockery of democracy in Opposition-ruled West Bengal or neighbouring countries like Bangladesh and Pakistan, be the beginning of another interventionist regime change operation by the liberal Amercian establishment?

Why do Lutyens and ELM enjoy US bullying?

For Lutyens’ elites and the editors of India’s English-language media outlets, the US is the supreme decision-making authority in the ‘free world’, a propaganda term invented by the US-led Western bloc to refer to themselves and their allies. Until 2014, Bharat was patted on the back by the West and lavished with facile labels like ‘largest democracy’ and ‘peaceful Gandhians’, while the same West kept nurturing a sham democracy like Pakistan, an Islamofascist terror state in reality, for its own geopolitical interests.

In the run up to the 2014 elections, Bharatiya citizens were repeatedly reminded by our elites, ELM and Western outlets like The Economist that Narendra Modi would never be acceptable to the West because of the ‘stain’ of Gujarat 2002 and his ‘Hindu nationalist’ credentials. Some also mocked Modi’s English-speaking ability and accent, claiming it would prevent him from being effective in international relations. Well, citizens ignored this gratuitous advice and chose the best available person for the job.

Then started a relentless campaign of demonization – ‘intolerance rising, Christians under attack, Muslims under attack, Dalits under attack, universities under attack’. In 2015, Obama delivered an unwarranted sermon on ‘Gandhi and tolerance’ days after a state visit to Bharat, which Times of India‘s mentally colonized US-based Foreign Editor Chidanand Rajghatta described thus, “Days after New Delhi received him with euphoria, US President Barack Obama delivered to India an embarrassing smack-down, saying Mahatma Gandhi would have been shocked at the acts of intolerance in the country”.

Incidentally, Obama made these comments around the same time when US was assisting jihadis, including those with links to Islamic State, accused of serious human rights abuses in Syria, in order to carry out regime change and depose Assad by any means. US was also backing Saudi Arabia’s war in Yemen that has been widely condemned for ruining the country.

Would the foreign correspondent of any self-respecting country describe his country being defamed in this manner? Yet, this is what our media routinely does. Newspaper front pages are littered with ‘news’ this deracinated, colonised lot consider important, whereas important events occurring in the country are ignored. Nobodies like William Dalrymple and European diplomats are asked to comment on Bharat’s neutral stance over the Ukraine-Russia conflict, in the hope of extracting a condemnation of their own nation’s foreign policy.

This mental colonization is now seguing into traitorhood. We ignore it at our own peril, and that of the integrity and sovereignty of the nation.