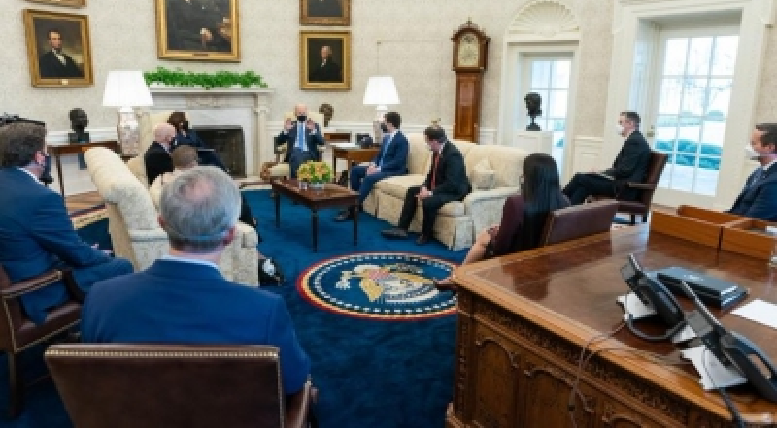 US President Joe Biden called gun violence in the country an “epidemic” and an “international embarrassment”, as he delivered a speech from the White House introducing new executive actions aimed at addressing the issue.

“Nothing I’m about to recommend in any way impinges on the Second Amendment,” Biden said in the Rose Garden during an event on Thursday also attended by Vice President Kamala Harris and Attorney General Merrick Garland.

Further pushing back the idea that tighter gun control amid a recent surge in mass shootings will infringe Americans’ right to bear arms, the President said that “no amendment to the Constitution is absolute”, reports Xinhua news agency.

“So the idea is just bizarre to suggest that some of the things we’re recommending are contrary to the Constitution,” he added.

“Gun violence in this country is an epidemic. And it’s an international embarrassment.”

Laying out a set of executive actions, Biden said he wanted to tighten regulations for the so-called “ghost guns”, homemade weapons or firearms that are assembled from parts without serial numbers so that they are more difficult to track.

The President wants the Department of Justice (DOJ) to propose rules requiring that the gun kits be treated as firearms, so that they must bear easy-to-trace serial numbers, and that background checks are required for people purchasing them.

He also directed the DOJ to propose model “red flag” legislation for states that could help keep firearms out of the hands of potentially dangerous people, and to reclassify pistols modified with stabilizer braces to be subject to the National Firearms Act, meaning owners would have to register and pay a fee for the modifications.

The DOJ is also expected to issue a report on gun trafficking, and federal agencies will be paying more attention on using grant programs to intervene in community-based gun violence. Biden is set to nominate David Chipman, a gun control advocate, to lead the Bureau of Alcohol, Tobacco and Firearms.

The House-passed bills, however, face slim prospects in the evenly-divided Senate, as Republicans are almost unified in opposing most of the proposals

“Enough prayers, time for some action,” Biden said in his plea with lawmakers, conceding that stricter gun restriction proposals that have so far been to no avail even in the face of perpetuating gun violence are making it seem “like our entire political process is broken”.

White House press secretary Jen Psaki told reporters later in the day that “there will be more” executive actions by the administration on gun safety.