Universities should distance themselves from Hinduphobic Hindutva conference: HAF 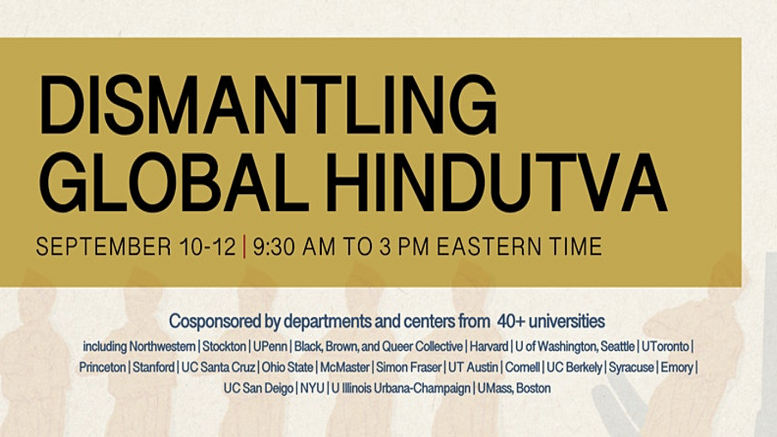 In response to a virtual conference titled “Dismantling Global Hindutva”, scheduled for September 10–12,  the Hindu American Foundation (HAF) has written to the presidents and key administrators of all 41 universities listed as event co-sponsors, asking them to distance themselves from the event and its partisan and Hinduphobic motives.

The Foundation also asked that university officials ensure the safety and well-being of Hindu students, faculty, and staff who may feel targeted or threatened, or face hostility or harassment as a result of the kinds of generalizations, misunderstanding, and otherizing the event and its supplementary content perpetuates.

“The DGH organizers trade on the prestige of your institution’s name to host, not an academic conference, but a partisan event related to politics in India. The event platforms activists with extensive histories of amplifying Hinduphobic discourse even while denying the existence of Hinduphobia. Many of these activists equate the whole of Hinduism with caste bigotry and other social ills; deny the subcontinental indigeneity of Hindus and Hinduism; and support or minimize violent extremist and separatists movements and deny the resulting genocides and ethnic cleansings of Hindus,” the letter states.

The letter also expressed concern about the impact the event could have on students, stating, “Hindu students are targeted and report feeling under attack for opposing Hinduphobic depictions of their religion in the classroom and for opposing anti-Hindu hate on college campuses.”

HAF wholeheartedly supports free speech and academic freedom as we are guided by the Hindu precepts of satya  (truthfulness), vāda and saṃvāda (debate and discussion), and viveka (discernment). We ask that institutions of higher learning support the same and also privilege academic integrity by promoting open inquiry, encouraging a diversity of viewpoints, and modeling constructive disagreement.

This event, however, is the antithesis of all of these values.

The letter tells university presidents that, “The use of your university’s name and logo, in this regard, implies overt institutional partisanship and endorsement of the event’s political and discriminatory motive.”

(This article was first published on hinduamerican.org and has been reproduced here in full.)